Equinox Minerals Limited (Equinox) – already recognised as the operator of the biggest copper mine in the world over the last two years – has major plans to boost copper output; to launch a 2M lb a year uranium plant; to expand its copper and uranium reserves and extend its life of mine through ongoing exploration; and to focus on global acquisition opportunities for further growth and diversification.

Dual listed on the Canadian (Toronto) and Australian stock exchanges, Equinox is an international mining company, focused on operating its 100%-owned Lumwana copper mine in Zambia.

The Lumwana mining operation will involve two pits. The one currently being developed is Malundwe, which will yield about 120 Mt of ore – this means about six years’ life, or a little longer. Then the operation will move into the much larger Chimiwungo pit, which will provide another 200 Mt of ore.

“Lumwana is certainly the biggest copper mine in the world over the last two years,” Equinox president and CEO Craig Williams told Mining Review Africa. “It has a resource of 6.3 Mt of copper plus 16.6 lbs of uranium.”

A general view of the Lumwana plant

Lumwana construction was completed in late-2008, after almost 10 years of intensive activity. Total capital cost of the project was US$841 million (R6.7 billion), and first production was achieved in mid-December 2008. The mine is currently ramping up to its initial mill throughput rate of 20 Mtpa.

THROUGHPUT COULD RISE TO 30 MTPA
“Having already shown that the plant can operate well above that mark – which amounts to around 24 Mtpa, the key really is to get the mine to operate fulltime at that matched capacity,” Williams continued. “We are in the process of trying to achieve that, and I believe it is quite conceivable that within the next 12 to 18 months we can push mine delivery to that 24 Mt throughput level.”

That is not the end of the story, and Lumwana has the potential for even further expansion. “With such a huge resource there is certainly the opportunity to expand further, and we have nominally picked a target of 30Mtpa,” he revealed. “To achieve that, we would certainly have to do a feasibility study and commit to additional capital for expansion,” Williams emphasised. “But first we have to get to 20 Mtpa, and then 24 Mtpa, which the mill can handle, but to get the mining fleet up to that level will take some significant work,” he continued.

“The biggest challenge for us is to push the mine’s performance up to the level we need to keep the mill full, and we’ve still got a way to go,” he conceded.

“We have some intensive programmes underway with our own team and with various specialist consulting groups to improve productivity and look at mine scheduling, and I think as we move along, material movement and mine output will steadily improve,” said Williams. Evidence of this is in the latest figures, which show that material movement in the second quarter of this year was up 134% on the first quarter, and ore mined was up 65%.

“We would then have to do a feasibility study and order additional equipment in order to reach 30 Mtpa, and this would probably involve a four to five-year time-frame,” said Williams.

“If you bear in mind my saying that we will probably be finishing the Malundwe pit and moving on to Chimiwungo in about six years’ time,” he reiterated, “it would be most advantageous – with Chimiwungo’s lower grade ore – to have the additional throughput capability to optimise the new pit. So, in a broad sense, the objective is to look at what we can do by the time we move into Chimiwungo,” Williams observed.

URANIUM PLANT WITHIN THREE YEARS
Moving on to the uranium issue, there are clearly defined high-grade uranium zones within the Malundwe ore body. “What we are doing is selectively mining and stockpiling that uranium-enriched ore as we come across it,” said Williams. “The bottom line resource is about 16.5 M lbs of uranium, of which probably about 12.5M lbs is in the copper pits we are currently mining,” he added.

“We already have about 1 Mt of that uranium ore stockpiled, and we will continue to stockpile it until we build a uranium plant to extract the metal,” said Williams. “We are currently mining in the vicinity of those uranium zones, so within the next two years most of the uranium will be mined out and put on stockpile,” he continued. A full feasibility study on the design of the uranium plant was conducted last year. We have had the environmental impact assessment approved by the government, and we are currently reviewing the costing,” Williams explained. “The plant is fully designed and ready for action – we now need to put in place the off-take and the financing for the project. We will be involved in these details in the next few months,” he said.

“We are currently reviewing costs, which the study set at US$200 million (R1.6 billion), but they are unlikely to change substantially,” he predicted. 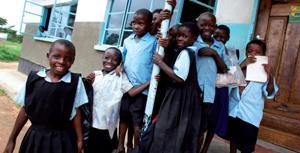 Timing will depend on how the project is financed. “It may be linked to the off-take agreement, or we may finance it independently. It will take about 18 to 24 months to build the plant, and the decision point is probably still six months away – so you’re looking at two to three years for actual production,” Williams estimated.

He pointed out that it could be done in two years, but emphasised that one of the considerations he faced was not to distract the focus of the First Quantum team from the key issue at hand. “Ramping up the copper project is the main game, and that’s where our focus has got to be.”

GREAT EXPLORATION OPPORTUNITIES
Turning to exploration, Williams pointed out that the Lumwana mining licence covers about 1 355 sq km – a big area which encompasses a whole range of copper and uranium exploration targets at various stages of exploration, but all fairly early. “There’s a great deal of opportunity to find additional near-mine mineralisation within striking distance of 15 to 20 km from the Lumwana mill,” he said.

“This exploration is ongoing, although I must say that over the last couple of years we have been so focused on getting the copper operation up and running, that we have let exploration trickle along on fairly modest budgets,” Williams admitted. “I would hope that, as cash flow improves into the coming year, we can loosen the reins a little on exploration. We have been working primarily on target definition but I think we will now be able to do some decent drilling on some of those targets to see what they come up with,” he added.

“We do have ground elsewhere in Zambia, but before we do any regional exploration we need the whole new Zambian system to settle down, and to ensure that we do rightfully own the property we believe is ours. Regional exploration, therefore, has to stay on hold until the new mining act and its title definition process have been settled,” Williams explained.

“In any event, as far as the year ahead is concerned, we are well and truly focused on the ramp-up and on getting our material movement and productivity up – those are our absolute top priorities,” he added.

“Finally, while we do have the organic growth opportunities like copper throughput and production expansion; the uranium project; and the fruits of our ongoing exploration; we are now at the point where we are starting to look for M&A opportunities elsewhere,” Williams pointed out. “And who knows where,” he asked. “It might be in Zambia, it could be elsewhere in Africa, and it could be in Australia or Latin America – it will be where the good projects are,” he assured.

“We do not intend to be a one-project company forever, but we are not rushing into anything. We are starting to look for opportunities, and they will come when they come,” he declared. “We’ll probably stick with what we know – and that’s copper, but we are keeping an open mind,” Williams added.

“So, apart from all our copper and uranium aspirations in Zambia, we are on a focused search for global M&A opportunities that will provide potential for further growth and diversification,” he concluded.