Mineral Deposits Limited (MDL), which has ramped up production at its Sabodala project in Senegal, is spending close to US$500 million on two more projects in that country.

The Australian based resource company’s Sabodala project, located 650 km east of the capital, Dakar, is part of the renowned West African Birimian gold belt, which is emerging as one of the most exciting gold belts in the world today.

The US$250 million Sabodala gold mine and mill commenced commissioning just over a year ago in mid March 2009. It had ramped up production to a rate of 2.3 million tonnes per annum (mtpa) by the end of last year, well above nameplate capacity of 2.0 mtpa.

“In less than nine months to 31 December 2009 we produced 163,000 ounces at a cash cost of US$450/oz,” MDL executive chairman Nic Limb tells Mining Review Africa. “We went from first drill hole to first gold bar in 3.5 years, which we believe is one of the best achievements in the gold industry anywhere in the world in recent times,” he adds.

“And now less than a year on, we are tackling two new projects in Senegal costing us fairly close to US$500 million. One is a two-phase expansion to Sabodala and the other a new mineral sands project.” 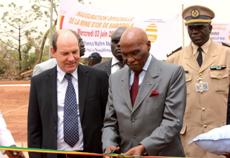 MDL chairman Nic Limb and the president
of Senegal at the official opening
of Sabodala.

The Sabodala expansion is designed to double production from 2.0 mtpa to 4.0 mtpa by 2013. “We are busy with phase one, which will take production to 3.5 mtpa,” Limb explains. “It is scheduled to be completed by 2011, and will cost another US$55 million, with US$35 million for the plant and US$20 million for the fleet.

“Phase two is being designed to increase throughput by another 500,000 tpa to 4.0 mtpa,” Limb continues. ‘Treatment of 4.0 mtpa of ore will yield a total of 200,000 ounces of gold a year, a 25% improvement on current production. We are expecting to earn US$75 million to US$100 million a year from Sabodala,” Limb estimates.

“The second phase will cost in the vicinity of US$25 to US$30 million dollars. No starting date has been set at this stage, but we hope to have it completed by 2013. It will depend on the future market situation, which looks set to improve substantially by that stage,” he says.

Capital expenditure for the Sabodala expansion is on the low side because the original plant was designed and constructed with future expansion in mind, with certain key parts of the existing infrastructure already having the capacity to handle the proposed increased throughput.

The Sabodala plant at dusk.

“We built a two mtpa mill which is rapidly expandable to four mtpa. And although our current operation needs 14 MW to run, our power station is a 30 MW installation, and our crusher is a five million tonne installation. This was all done deliberately to give us a future strategic advantage in the district,” Limb explains.

This higher ore throughput and gold production will have a definite effect on life of mine. “It will bring it down from 11 to seven years, based on existing reserves,” he reveals, but hastens to point out that the possibilities for increasing reserves and extending life of mine are huge.

“Exploration around Sabodala on both the mining concession and regional land package is being significantly ramped up with a view to increasing resources and reserves and extending the longevity of the operations at the higher production rates,” Limb continues.

“To date we have been very preoccupied with building the mine and getting it running. As a result, near-mine exploration is at an early stage, but we have expectations that within a few kilometres of the mill there are a number of rather large opportunities to be drilled out.

“Bear in mind, we have been focused only on the shallow pits at Sabodala at this stage, and we are only working 30% of the Sabodala resource area. Obviously we can go deeper, and we are also looking at two or three other near-side possibilities,” Limb declares. “We are spending US$14 million on exploration this year alone.

“It is extremely likely that this exploration will lead to an increase in reserves – not only in the near-mine area, but also within a 50 km radius, where we have 1,600 km2 of exploration ground with an enormous number of targets.”

Overview of the Sabodala pit works.

The second MDL operation is the Grande Côte mineral sands project, which is located on the coast of Senegal, starting approximately 50 km north of Dakar and extending northwards for more than 100 km.

An independent definitive feasibility study released in about April 2010 anticipates the total cost of the new project at some US$400 million. Grande Cote’s success is ensured by a combination of factors, it adds. These are: very low operating costs, a very long life of mine, no overburden or clay, a low environmental impact, high quality ore, and an orebody which can provide for major expansion when necessary.

The study provides for production of both zircon and ilmenite as the main products, with minor quantities of rutile and leucoxene. Previously, the focus had been on the production of zircon as the main output, but recent data shows a good quality ilmenite product can be produced, in addition to an excellent quality zircon product which should attract premium pricing.

The project will be developed as a dredging operation with mineralised sand being treated in a floating spiral concentrator, wet concentrator and dry mineral separation plant. Virtually all water and 98% of the sand will be returned to the dredge pond within 30 minutes of dredging, providing minimal environmental impact.

The company says that the large scale of this orebody and the high quality of its zircon provides the potential to establish an operation of international significance.

The study points out that the size of the orebody provides for a large scale, low-cost dredging operation using conventional technologies similar to MDL’s previous operations. Anticipated annual production, based on 48 to 50 mtpa of dredge/floating concentrator throughput, is about 75,000 to 80,000 tonnes of zircon; 550,000 to 600,000 tonnes of ilmenite; 6,000 tonnes of rutile; and 9,000 tonnes of leucoxene. 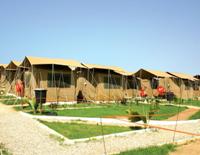 Referring to life of mine, Limb says: “You reach a stage where it is pointless to drill out any more of your reserves. The reserve our initial dredge path will cover represents only 30% of our deposit area, hence there are ample deposits to move onto when the time is right. Accordingly, a mine life of at least 25 years is supported by the global resource,” he adds.

“As far as making an actual start on the project is concerned, we are just getting organised. We expect actual construction to start early next year, and to produce by 2013.” The projected timing of the project is predicted to coincide with a shortfall in supply for both zircon and ilmenite.

Like everything, market demand for zircon and ilmenite has been weakened through the global financial crisis, but is now recovering sharply. “The real significance of this project is that all of the forecasts have both zircon and ilmenite going into serious deficit in 2013 as we come on stream.”

Limb explains that because of the size of the Grande Côte project and ongoing development potential at the Sabodala gold mine, the Board of MDL has concluded that the interests of shareholders will be served best by spinning out the new mineral sands project and financing it externally. It has mandated management to appoint advisers to advance this key initiative.

“This is a financial decision. We will raise the equity component, and the debt component will come from development banks,” he points out. “We are reviewing proposals from a number of major investment banks, mainly in Australia and Britain, but we will probably go with an Australian institution,” he suggests.

“I must also mention that we have been receiving strong Chinese interest, and this could take financing of the project in a different direction,” he observes, “but obviously this remains to be seen as negotiations develop.”