“We are currently involved in Southern African mining projects worth some US$350 million (close to R3.5 billion), and we are completing feasibility studies which we expect to convert to contracts worth anywhere between US$700 million (R5 billion) and US$1 billion (R7 billion) in the next two to three years,” says CEO George Bennett in an exclusive interview with Mining Review Africa.

The Kalukundi copper plant
tailings site in the DRC

WIDE RANGE OF PROJECTS
Current major projects include the EPCM contract for the plant for First Uranium’s Ezulwini underground mining project; the full EPCM programme for the Africo Resources Limited Kalukundi coppercobalt project; and the refurbishment of the plant for Great Basin Gold’s Burnstone gold project.

The Ezulwini operation is being developed by First Uranium, in which Simmer and Jack has a 65% stake, and includes one of the first uranium plants to be built in South Africa in almost 25 years. MDME will construct the uranium and gold processing facilities, with the first gold due to be produced in April 2008, ramping up to over 340 000 ounces per annum by March 2011. Uranium production is expected to begin in June 2008, building up to over 650 000 pounds per annum by March 2011.

Located some 40 km from Johannesburg in the western portion of the Witwatersrand Basin, the project is scheduled to take 20 months to complete, and the contract is valued at US$110 million (close to R800 million). The plants will operate at a throughput capacity of 1.97 Mtpa. 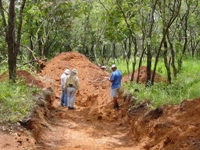 A copper trench at Kalukundi

MDME has been awarded the full US$175 (more than R1.2 billion) EPCM contract for the Kalukundi operation in the DRC. It is a high-grade, coppercobalt project located in the Katangan copper belt, and at full production it will yield 16 400 tonnes of copper and 3 800 tonnes of cobalt per annum.

There was a delay because of a legal dispute around Africo’s ownership, but it has been confirmed in the interim that the title does rest with Africo – so the project is now expected to go ahead early in 2008.

The company is also busy with work for the Great Basin Gold’s US$153 million (almost R1.1 billion) Burnstone project in Mpumalanga. “We have sourced a second-hand plant for the project in Papua New Guinea, and we are busy managing its refurbishment, as well as doing frontend detailed engineering design,” Bennett reveals. The project will start in about March next year, and is expected to cost between US $40 (R280 million) and US$50 million (R350 million),” he says.

“We were also awarded a fourth contract worth some US$60 million (R420 million),” he adds, “but we have subsequently withdrawn from this project.”

“We have a conversion rate of 90% of our studies becoming actual projects for us,” Bennett explains. “At the moment we’re running at 100%, but historically it’s been 90%. So let’s be conservative and say we get only a 70 to 80% conversion rate on these studies – that means we will have between US$700 (almost R5 billion) and US$800 million (R5.6 billion) of work in the pipeline over the next two to three years,” he calculates. The bankable feasibility studies involved are as follows:

While the plan is to start construction on the Kalagadi and Lily mine projects early in 2008, the other three will have slight delays for raising finances and other preparations. They should all be underway by 2009 – probably during the first half of the year.

“We are currently negotiating another two feasibilities for projects worth about US$60 million (R420 million),” Bennett reveals. “I can’t go in to any details at this stage,” he explains, “but one is gold and the other iron ore. We’ve also been invited to look at a US$35 million (R250 million) gold project in Algeria.”

HIGH TURNOVER PREDICTED FOR 2007
The new company has not operated internationally at this stage, but the team has considerable international experience. “We do have the skills to handle global projects, and will most certainly look at any possibilities that crop up,” Bennett points out.

“We are very strong in gold, and our team has the experience of having built more gold plants than any competing engineering company,” he claims. “We are very quickly building up capability in uranium, which not many companies have, we are very strong in base metals such as copper and cobalt, and we also handle diamond projects,” he adds. “The only major area we haven’t tackled yet is platinum – but we certainly can and we are willing to do so if the opportunity arises.”

Turnover for MDME this year is expected to be a lot higher than 2006, which was effectively a start-up for the new company. “We are very cash-positive at the moment, and will be producing very good numbers this year compared to 2006,” Bennett assures. “We are showing a very healthy profit, which will be substantially higher next year and in 2009, which should both be very good years,” he predicts.

Looking to the future, Bennett expects the current resource boom to last at least eight to ten years, based on the continuing growth of China, India, Brazil and Russia. “The demand for new projects is not going to slow down, because the majors are battling to replace their reserves,” he points out.

“The one thing that has stood out in recent turbulent times on the world stock markets is that commodity prices have remained very steady throughout this turbulence, and the reason is simply that the demand is still there – the metals are still very strong,” Bennett explains.

“Against this background,” he concludes, “we have built MDME to be bigger in 18 months than its predecessor ever was in the previous 18 years.”