On the back of a difficult year driven by the global economic meltdown, South African-based and JSE-listed Metorex Limited – a well-known base metal operator in Zambia and the Democratic Republic of Congo (DRC) – has taken decisive action to re-focus the company.

Against this background, CEO Terence Goodlace is intent on breaking the back of the company’s problems by the end of this year.

A mid-tier mining group focused on a diversified portfolio of gold, industrial mineral and base metal operations in Central and Southern Africa, Metorex remains committed to its strategy of being a leading multi-commodity mining group exploiting high grade, long life ore bodies in sub-Saharan Africa.

Confirming that the company – like many others in international mining – had suffered under the weight of rapidly declining commodity prices, in conjunction with major investment programmes in an inflationary environment, Goodlace said this had led to the successful capital raising of R922 million, as well as further decisive actions to address challenges and re-focus the strategy of the company.

“These include delivery of the Ruashi II project in the DRC and pursuing opportunities to further diversify the commodity and geographic mix of the Metorex portfolio,” he explained. “The group has a declining capital expenditure profile which will go a long way to improving its current cash position,” he added.

WE MUST RESTORE OUR REPUTATION AND BALANCE SHEET
“There are two things I want to do with the company,” Goodlace emphasised. “One is to restore its reputation, which has been dented. We need to demonstrate that we can operate these mines, that we can operate in Zambia and the DRC, and that technically we can do all the right things,” he said.

“Secondly, we must restore the balance sheet. Once we have succeeded in doing this, we will be in a much better position to move forward, because part of us moving forward is to include advancement of projects that are in the pipeline – some of which are currently on hold,” Goodlace pointed out.

“I would like to ensure that as far as possible by the end of this calendar year our balance sheet is in a much better position. That’s the first priority, and we can’t worry about too many other things right now. We’ve got a very specific focus on restoring the damage,” he insisted.

“In order to drive commitment to its growth strategy, Metorex will focus on three imperatives,” Goodlace pointed out.

“They are: completion of the Ruashi project to design capacity, as soon as possible, within currently estimated capital costs and with operating costs in the lower quartile of the copper cost curve; reduction of group indebtedness; and improvement of the geographic and commodity balance of the group’s portfolio,” he declared.

“Human resources and appropriate technical skills have been injected into the businesses, and we are firmly focused on improving operational performance,” said Goodlace. “We are totally committed to meeting current and future strategic imperatives and I believe there is a solid foundation and the right leadership in place to steer the company through these uncertain times,” he added. 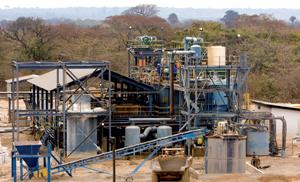 ENCOURAGING PROGRESS
“In addressing these imperatives, we launched and have made encouraging progress with a de-leverage programme including the disposal of non-core assets; the raising of project-specific funds to reduce debt and develop our high grade DRC copper assets; the evaluation and progressing of corporate transactions with entities with synergistic cash-flow, growth and commodity or geographic portfolios; improvement of the quality of operational and managerial human resources within the group; and reduction of costs throughout the group,” Goodlace explained.

“The current economic environment is harsh and uncertain,” he emphasised, “and the company will need to achieve the above objectives in order to survive this period, and to emerge with an ability to maximise the opportunities available from our quality mining portfolio in an eventual global economic recovery.”

Metorex currently operates the Chibuluma South underground mine and the Sable processing plant in Zambia, as well as the Ruashi mine in the DRC. In addition it has three development projects in the DRC – Kinsenda, Lubembe and Musonoi.

“Chibuluma South is a well run operation and a decent ore body – generally a low-cost producer at grades exceeding 3%. It has a current reserve of 4.7 Mt at 3.35%, giving 158 753 t of copper, and life of mine is approximately 8 years,” said Goodlace. He emphasised that Metorex was the only South African-listed diversified miner still operating on the Zambian Copper Belt.

“We are looking at possible greenfields and brownfields opportunities – we have actually started a near-mine exploration process with a view to finding additional resources in and around Chibuluma South, and thereby extending life of mine,” he revealed. “We are not doing any exploration elsewhere in Zambia at this stage. We have curtailed a lot of our exploration because of cash flow constraints.”

NO MORE CONCENTRATES FROM RUASHI
Sable Zinc Kabwe Limited is a copper and cobalt processing facility established to treat concentrate from Ruashi and other ore suppliers up to FY 2008.

“So Sable is now obtaining third party ores,” said Goodlace. “It went through a period where there was little ore coming in, but it is beginning to ramp up again with third party ores from the DRC.”

The continuing upward trend is illustrated by the fact that output was 1 105 t in the June quarter – more than double the 549 t produced in the previous quarter. And production for the September quarter is estimated at 1 900 t.

“The mine exceeded our June 2009 quarterly copper production expectation of 4 500 t by producing 5 245 t. Cobalt production exceeded the expected 450 t by reaching 568 t,” Goodlace revealed. Total mill feed during June amounted to 78 103 t at a blended head grade, between tailings and open pit ore sources, of 2.92% copper and 0.54% cobalt.

“Plant de-bottlenecking continues to be a key focus, and satisfactory progress has been made with improving re-agent circuits,” he added. The front end of the plant – which includes the new mine tip, jaw crusher and coarse ore stockpile – is planned for completion by the end of 2009,” 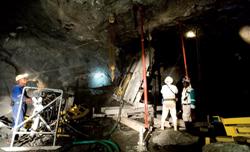 KINSENDA ON HOLD FOR AT LEAST A YEAR
Metorex’s Kinsenda project is on hold at the moment, and the company has been doing ongoing pre-feasibility studies. “We stopped exploration, but that will have to be completed before I can make any decision to go ahead with the project,” Goodlace explained. “We have used the full feasibility done by the previous owners and advanced our own studies, and plant design to detailed engineering is 80 to 90% complete. We have done a pretty detailed mine plan, but we do need to do some more drilling – I wouldn’t give any start-up until those holes are done,” he added.

“If our cash-flow position changed, we would be in a position where we could probably take between nine and twelve months to re-start final planning on the project. We need about US$1.2 million (R9.6 million) to finish that exploration,” Goodlace calculated. “Then we would finish the study, secure the finance, and finally move into the project itself – all of that will take at least one to two years,” he estimated.

“We were planning for Kinsenda to process between 60 and 70 000 tpm. This treated ore would be at a grade of 4.3%, which would yield around 2 500 tpm of copper,” Goodlace revealed.

“We curtailed work on the Musonoi exploration project in the Kolwezi area earlier in the year, but we have recommenced drilling,” said Goodlace. “We are now doing the conceptual/pre-feasibility work, and we think it’s a pretty exciting project which can do either open pit or underground mining. We now have to decide whether to go straight underground or not, and on the basis of that decision, what plant we will need,” he explained.

COMMODITY PRICES ON THE WAY UP
“Work on the Lubembe development project was halted about six months ago, and it is still on hold. “We do know that it could be a deposit of at least 2.2% copper – not as high as some of the other entities, but it does lend itself to open pit mining,” he added.

“Looking ahead, one gets a sense that a fiscal stimulus has happened across the world, and has had an impact on bringing commodities back,” Goodlace suggested. “I think the downturn that we saw previously might have been a bit of an over-reaction, but I wouldn’t want to second-guess where the world is going to end up, and what the new supply and demand dynamics are going to be,” he admitted.

“You cannot argue with the fact that commodity prices have come off a low and gone up, and that we’ve had a demand for metals like copper and cobalt. We have certainly seen the demand for these commodities from places like China and India,” he pointed out.

“Improved commodity prices and ensuring that our operations perform – in addition to strategic investments or possible asset sales – should get us into a position where we start changing our balance sheet for the better; and our internal aim remains to get there by the end of the year,” Goodlace insisted.