Despite the delay in the South African Department of Energy’s Integrated Resource Plan for power in that country, CIC Energy is moving ahead with the multi-billion rand development of its Mmamabula Energy Complex (MEC) in Botswana.

Mmamabula is a 2.63 billion tonne coal resource and the MEC could involve costs of close to R120 billion. The MEC consists of the Mmamabula energy project (MEP), a coal-to-hydrocarbons project (CTH) and an export coal project (ECP).

“The government is working on its longer IRP2, a 20 year integrated resource plan which is scheduled to come out in the third quarter of 2010. We had expected a green or orange light for our MEP by June or July last year, but it is unlikely this will happen now before the IRP2 is published. This means an estimated delay of at more than a year in actual construction, which we were scheduled to have started early in 2010.

“We had originally planned to commission the first set of generators (two x 600 MW) by early 2013 and the second set four months later,” Scholtz says. “As a result of the delay, even if we hit the button now, we will not have the first generating set running by then.”

CIC Energy is targeting 75% of the power to go to Eskom, and the other 25% to Botswana Power Corporation.

“All our plans and designs were ready, our contracts were mostly in place, and our tariff submission went to the Eskom board last June. All the differences had been ironed out, and by and large the whole contract is drawn up, with all the clauses in terms of fixed and variable off-takes, length of contract, terms and conditions. Two things need to happen; the final tariff needs to be agreed upon, and the contract for the 30 year power purchase agreement needs to be signed.

“Without that agreement you can’t finalise your lenders, the mining licence or your powergenerating licence. We believe we have the lenders all lined up, but the final rubber stamp is needed. Everything hangs on that power purchase agreement.”

The power station will consume 4.4 million sales tonnes a year which, from a run of mine point of view, will require CIC to mine 5.8 million tonnes a year. “We have the layout and design for the mine and required infrastructure, all the approvals have either been obtained or are in the process of being signed off, and by January 2013 the mine could have been in steady state.

“The project capital and infrastructure costs will be about US$3 billion,” Scholtz says.

The Mmamabula Energy Project involves only a minor proportion of the overall measured coal resource, which has been firmed up at 2.63 billion tonnes, from which about 1.9 billion tonnes can be extracted.

“The resource earmarked for and committed to the MEP is 370 million tonnes, which is about 14% of the total resource. We are not just sitting and waiting for the IRP2 – we are looking at other options for that remaining 86%,” he emphasises. 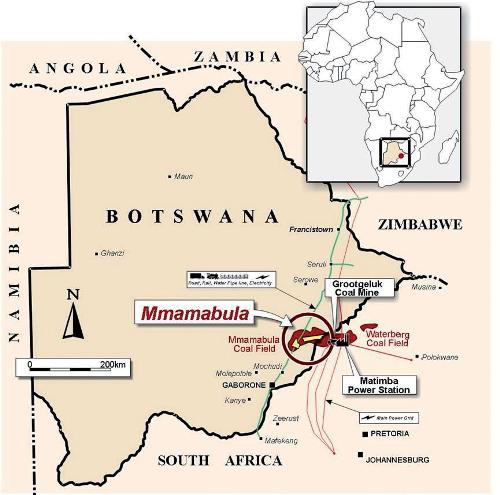 Map detailing the position of the Mmamabula coal field in Botswana.

The first priority after the on-site power production project is CIC Energy’s export coal project, which envisions the seaborne export of A-grade thermal coal from the Mmamabula coalfield to various international markets.

“The main three features of the project are: dedicated mines with multi-product beneficiation plants, as well as rapid rail load-outs; a railway line of up to 1,500 km, planned to be constructed by a transportation consortium that would include CIC Energy; and the upgrading of the selected port, including a tippler to offload the rail wagons and stockpiling capacity to accommodate sufficient coal to load large ocean going vessels,” Scholtz says.

“We have made some progress with our export project, for which we have a total resource of 432 million tonnes available. We always knew that this was a longer-term initiative, because it requires an outlet. That means a railway line to a coast, and our preference remains the construction of a rail line to a port in Namibia on the west coast of Southern Africa,” he adds.

“We have continued with the pre-feasibility, and although things are not moving as quickly as we would obviously like, there has been progress,” Scholtz explains.

“We have joined forces with a few other industry players to form a consortium of not only producers but potential developers as well. This makes the project more feasible and gains economies of scale.”

The consortium includes diversified miner Exxaro, AIIM, Morupule, the Industrial Development Corporation (IDC) and the Development Bank of Namibia. In addition, the governments of Botswana and Namibia have appointed their independent consultants to look at the pre-feasibility study of the line.

The major issue here is to transport the coal to the coast. “We have looked at the options of going east to link up with the Richards Bay Coal Terminal, a coal terminal at Maputo, or of going further into Mozambique via Beira; or going west to link up with the Sishen-Saldanha Bay iron ore route, or to go through Botswana and Namibia to a port on the Namibian coast,” Scholtz says.

Options for the actual port are Walvis Bay and Luderitz, and when CIC completes the final bankable feasibility study (BFS) a decision will be made on which of the two it will be. “We have commenced with elements of the BFS, and we are looking to have it completed by mid-2011. Construction would then take three to four years, so it becomes a five year project aimed at completion by 2015 at the earliest,” Scholtz says.

Priority number three for CIC Energy at this stage is a coal-to-hydrocarbon (CTH) project. “Our resource is balanced in such a way that there is still a significant amount of coal which is suitable for gasification and hydrocarbons, rather than power generation and export,” he says. About 182 million tonnes are available for this project.

“We have slowed down the expenditure on this project. We still have a mining team looking at provision of different mining arrangements, as well as an infrastructure team and a power design team at work on all the possibilities. 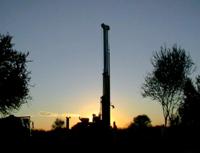 “While the CTH is on our backburner right now, we are certainly not losing track of what’s happening in the South African scenario in terms of fuel requirements, and we believe that Southern Africa is going to face a fuel crisis similar to the 2008 power crisis in the near future. We believe our planned CTH project to convert coal from the Mmamabula coalfield to fuels and petrochemicals has future potential, and we see the project bouncing back in the longer term.

“To sum up, we believe that the compelling reasons motivating the three projects that make up our Mmamabula energy complex are still very much in place,” he says.

“If you look at the export scenario, it is anticipated that the seaborne traded coal exports will increase by 200 million tonnes a year in the next 10 to 12 years, and we have our massive resource specifically for this purpose.

“We may be experiencing some interim delays and timing issues, but the motivation for our projects has not gone away,” Scholtz says.