Lusaka, Zambia — MININGREVIEW.COM — 27 January 2010 – Listed on the Toronto and London Stock Exchanges, First Quantum Minerals Limited “’ a growing mining and metals company engaged in mineral exploration, development and mining, predominantly in Africa “’ expects to produce a modest 9 600 tonnes of copper cathode in 2010 at its Bwana Mkubwa processing plant in Zambia.

Announcing this here after resuming operations halted over a year ago, the company pointed out that the plant had produced about 50 000 tonnes of copper cathode at its peak in 2006. First Quantum closed the Bwana Mkubwa facility after authorities in the DRC had banned exports of copper ore in October 2008, and only lifted the ban this year.

The Canadian company “’ which currently sources copper ore from the Democratic Republic of Congo (DRC) “’ said its Lonshi open pit mine in the DRC had been depleted and it was looking for other sources of copper.

“Production is expected to average approximately 800 tonnes of copper cathode per month until the end of 2010,” First Quantum said in a statement.

“The company continues to seek additional sources of economically suitable feed for the plant,” said First Quantum resident director Kwalela Lamaswala. It would consider several options to sustain production at Bwana Mkubwa, including the opening of a new mine in central Zambia, which the government approved in July last year. .

Reuters quotes official data as revealing that First Quantum plans to mine 2.4 million tonnes of copper ore at the Fishtie deposit in central Zambia to supply feedstock to the Bwana Mkubwa plant at an estimated feed rate of 100 000 tonnes for month. 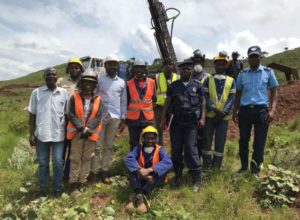