Mooiplaats illustrates CoAL’s determination to get into production

Coal of Africa Limited (CoAL) wanted to ensure its first operation in South Africa, the Mooiplaats Colliery near Ermelo, got into production as soon as possible; this meant it was innovative in sourcing power and finding an alternative export outlet for its coal.

As a result, while South Africa was experiencing nationwide electricity outages, Mooiplaats was developing a new mine. Its first continuous miner extracted the operation’s initial coal in October 2008. The second continuous miner was introduced a month later.

The company was aggressive in developing Mooiplaats, which illustrates its plans for establishing itself in Southern Africa’s coal mining arena. When it was unable to find suitable accommodation with the Richards Bay Coal Terminal (RBCT) it worked on an alternative route for its export coal, through the Matola coal terminal in Mozambique. The colliery successfully railed its first coal to Matola in September 2009.

Mooiplaats operates with only four CoAL personnel on site, which is in line with the company’s broad strategy. Although it owns the plant and all of the equipment, it uses the services of contractors to run these. The contractors include Klipbank Mining, which is responsible for underground production, and Kwena Mining, which operates the beneficiation plant.

The colliery, which has a capital expenditure of R1 billion, is ramping up to 2.4 million saleable tonnes by 2013. In addition to its export plans, Mooiplaats is located 1.7 km from the recommissioned Camden power station. With Eskom realising the importance of getting as much of its coal supply away from road transport, the mine is well positioned to supply some of the Camden coal requirement.

In the initial phase of development Mooiplaats invested in its own generation plant to deal with the lack of electricity grid connectivity. The colliery thus represented a new landmark in the industry for a project of its magnitude, when it operated for a substantial period using diesel generator sets only. The operation ran using the gensets until January 2010, at which point the grid electricity became available. The mine is currently negotiating a supply of 15 MVA from Eskom, which is anticipated to become available towards the end of 2011. The underground operations at Mooiplaats account for most of the power demand, with each continuous miner section requiring some 1.6 MVA.

Barloworld Power supplied the gensets, essentially four Cat 3516 units, each with a 2.5 MVA capacity as well as the medium voltage switchgear, including four interlinked 23,000 litre diesel tanks. The project for the genset plant room facility at Mooiplaats was designed and executed by consulting engineers, Badger Mining. The gensets will now be used for standby generation as the need arises. 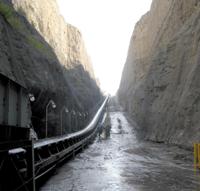 Currently Mooiplaats operates two sections, which mine at a depth of between 50 and 120 metres below surface via decline portals. The initial shaft was sunk into lean coal and section 1 intercepted bituminous coal at the end of January 2010.The coal being mined is from the C seam, which is the most prominent in this area, and the seam width ranges from 1.8 metres to 2.4 metres.

The two module 200 t/h coal handling and preparation plant at Mooiplaats has the capacity to produce 220,000 tonnes a month. It uses cyclones and then spirals for the recovery of the fines.