More than a million gold ounces at Hassai 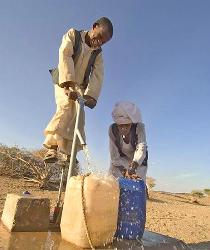 By means of underground foot pump
wells La Mancha provides water to
the community surrounding the Hassai mine.

Montreal based junior, La Mancha says that an aggressive exploration program the company started in December 2007 at the Hassaï mine in Sudan has delineated an estimated inferred mineral resource of 1,006,000 ounces of gold and 297,000 tonnes of copper. The gold equivalent of the copper resource represents 1,680,000 ounces of gold using a long term gold price of US$750/oz, long term copper price of US$2/lb.

On average, the resource is contained between the Hassaï pit floor and the 300-meter level. The mineralisation has an enriched supergene zone at the top of the structure with locally higher grades, and remains largely open at depth. To date, an inferred resource of 20,150,000 tonnes at 1.55 g/t gold, 1.48% copper and 0.18% zinc has been delineated.

Dominique Delorme, president and CEO of La Mancha, comments: “Delivering this resource estimate for the first of our six visibly identified VMS targets is a huge stepping stone for La Mancha. This should give our VMS project greater visibility within the investment community as it establishes the Hassaï mine as one of the most promising properties in the prolific Arabo-Nubian shield, alongside Nevsun’s Bisha project.”

Jean-Jacques Kachrillo, La Mancha’s vice president of exploration, says: “A Cd$5 million, 40,000-metre drilling program is being prepared to upgrade this inferred resource to the measured and indicated category. The 15- month program is expected to further delineate the enriched ore zone in the upper part of the structure, and increase the volume of the primary ore zone, as the lens remains open at depth.”

The Hassai mine, composed of twelve pits, has produced more than 2.1 million ounces of gold since it opened in 1991 and is expected to produce 62,500 to 75,000 ounces of gold in 2009. While the first 15 years of mining focused on the moreeasily- minable oxidised portion of the deposit, the VMS structure is visible at the bottom of six of the mined-out pits.

The resource estimate for the second target, the Hadal Awatib pit VMS lens, is in progress and was due to be released by the end of October 2009. Preliminary drill results on the second target, published in May 2009, intersected grades as high as 26 m at 1.19 g/t gold, 5.71% copper and 1.17% zinc from 104 meters. La

Mancha plans to publish the results of a scoping study early in the first quarter of 2010 that will summarise all the technical and economical aspects of the project.

The Hassaï mine is located in the Red Sea Hills desert of north-eastern Sudan, some 450 km from Khartoum. Inaugurated in 1992, it is Sudan’s first and only gold mine in production. Twelve pits have been mined over the years, generating a cumulative production of more than 2.1 million ounces of gold. La Mancha owns 40% of the mine through a subsidiary and is the mine operator. The Hassaï exploration licenses effectively encompass the entire geological district that extends over 24,000 square kilometres.