Zimplats Holdings Limited’s US$450 million phase two Ngezi platinum mine expansion may be delayed indefinitely, and an envisaged phase three project costing billions of dollars may not materialise, unless clarity is obtained around the government of Zimbabwe’s indigenisation percentages.

In an interview with Mining Review Africa’s contributing editor, Lionel Williams, Impala Platinum Holdings (Implats) CEO David Brown says that the completed phase two feasibility study has been given Implats and Zimplats board approval from a technical perspective, but this is subject to two conditions. Zimplats is 87% owned by Implats.

The second condition involves government of Zimbabwe issues. “First, it is quite clear that with various utterances on indigenisation and regulations being gazetted at a 51% local shareholding, this cannot be regarded as an investor-friendly approach,” Brown states. “I want to reiterate that we are not opposed to indigenisation – we fully support elements of indigenisation and we certainly want to be part and parcel of operating in Zimbabwe for the long term, but quite frankly 51% does not fully comprehend the situation of the mining industry. The mining industry involves vast amounts of capital with very long lead projects and returns spread over many years, hence all should understand the need for certainty, and for an economic return. The equation of 49% of the economic profits of a business versus a major share of risk and significant funding does not work.

“From a Zimplats point of view, I certainly believe that we have been an acceptable corporate citizen, and that has been confirmed at the highest level in government, because we take our social obligations very seriously, and we put back into society,” Brown emphasises.

“If you take that into account, plus the release of ground, plus an equity component of, say, 15% to 26%, then that would be a workable level. It’s something that we would be very happy to look at, and it’s not something that we are fighting against. All that we would want is clarity that the deals we have done and the money we have spent will be taken into account. Once we get that, and we are reasonably comfortable that it will happen, we will be happy to move forward,” Brown says.

But there are two other issues that need to be factored in. “One is in regard to the US$34 million debt owed to Implats by the RBZ, and which needs at some stage to be repaid. We can’t afford to let that go.”

The second element is the taxation issue. “Certain promises and undertakings were made by government of Zimbabwe officials, but have never been legislated,” Brown reveals.

“We are not in the wrong here. We have been working under the impression that these undertakings would be honoured and in fact legislated. Now we need answers on how those issues are going to pan out,” he adds. 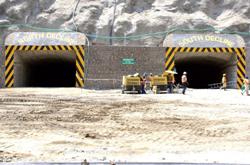 Decline roadway entrances at the Implats mine

“If we get clarity on all these issues by May, we could then approve the phase two expansion at our May board meeting. We need to ask the government for answers, and if they don’t provide them by then, we will have no choice but to delay the project.

“I believe that we have a massive investment here and I am sure the government will be willing to work with us to ensure a US$450 million investment, which will be the biggest single investment Zimbabwe in the last 20 years?” he says.

“If we get a positive answer by May, we would go ahead immediately with Phase Two, which will mean another 85,000 oz pa, and with us currently ramping up to 185,000 ounces a year on phase one by June 2011, this will take the total up to about 270,000 ounces a year,” Brown calculates. “The ramp up to this level will probably take two to three years to steady state between mid-2012 and mid-2013.”

Looking beyond phase two, Brown is confident about further exploration leading to increased future production. “As soon as phase two is underway, we are going to start looking at a phase three expansion, and this would include assessing the possibilities for additional smelting capacity, as well as base metal refinery capabilities and capacity,” he suggests.

“This would be very significant expansion, and we would be talking big numbers with capital expenditure running to billions of dollars. This is why it is so important that the government of Zimbabwe provide us with right sort of confidence to explore and hopefully implement this option,” he emphasises.

“In essence we can pretty much get going in terms of the feasibility study very shortly. Because it would include significant surface infrastructure in the form of a smelter and base metals refinery it could be a major boost for the platinum industry in Zimbabwe,” Brown says.

As far as production levels for phase three are concerned, Brown points out that it is just too early to even hazard a guess, but early indications suggest it could be equal to, if not more than, the 270,000 ounces a year which phases one and two will be producing. “And apart from PGMs, we extract base metals such as nickel, cobalt and copper from the orebody as well. In fact these orebodies have quite a significant by-product contribution from base metals.”

“We still believe that Zimplats has the potential to become a million-ounce-a-year producer, but we are talking about 15 to 20 years time. The point is that to get to that level of one million ounces a year, you need a significant upgrade in the country’s general infrastructure – particularly in the provision of electricity – and you need a lot more in terms of skills upliftment and training, as well as local procurement opportunities. You can’t build a million ounce platinum facility in isolation,” Brown points out. 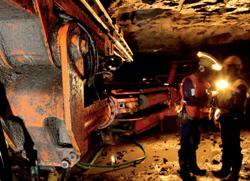 Turning to Impala Platinum’s South African operations, capital expenditure for the second six months of the company’s 2010 financial year from January to June this year is expected to be in the region of R2.8 billion, bringing the total capex for the year to R5 billion. The bulk of this spending will be on Shafts 20, 16 and 17 at Impala Rustenburg. This also applies to the company’s R23 billion, five-year capex programme.

“At the moment we have 13 shaft systems at the mine, and some of them are reaching the end of their lives, but we need to get a certain amount of production out of them for another couple of years,” Brown says.

“A total of R14 billion still has to be spent on these shafts, of which R10 billion will be spent in the five years from and including this financial year,” Brown reveals. “Final total cost of the three shafts will be of the order of R17 billion. This sounds like a lot of money, but it is not a bad capital investment considering that you get 500,000 ounces a year of platinum over a period of 20 years,” he points out.

Pre-feasibility will start on 18 shaft later this year. “It’s quite a significant shaft and will require time, but my view is that we would have to make the decision to go ahead within the next 12 to 15 months, and so shaft-sinking could only start at that point in time.

“I feel quite confident about the future,” says Brown. “We are still 20% to 25% better than our peer group in terms of unit cost performance, and if you take that into account after having the worst six months in the company’s history, we can only start to improve from here. So certainly, I don’t necessarily see that gap shrinking significantly. I see us now having the ability to at least maintain that kind of lead going forward,” he predicts.