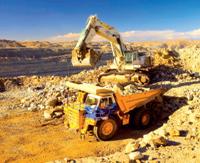 Basil Read, as part of two separate joint ventures, has begun work on new mining contracts this year worth over R1 billion. In joint venture with Concor and Grinaker-LTA, Basil Read has initiated a contract awarded by French company Areva, which comprises the construction of a maxi leach pad, seven solution ponds and crushing of filter material at Areva’s Trekkopje uranium mine situated 140 km north east of Swakopmund in Namibia in the Namib desert.

The leach pad is four by one kilometre in size and covers an area of about 2.1 million m2, which will be covered by a plastic geomembrane at a 1% fall. Once the leach pad has been laid down, 1,000 km of filtration pipe will be placed on top of it and then covered with a granite filter material up to 900 mm high across the entire area. This requires a total granite filter base of 3.8 million tonnes to a -38 mm specification.

Basil Read is undertaking
major contracts in Namibia
and Botswana.

Cut and fill for the 1% slope will require moving two million m3 of material. One million tonnes of sand will be prepared to a specification of -4.75 mm and mixed with 7% bentonite for the base of the leach pad.

Constructing the leach pad will involve a total of 260 plant items over the 24 month contract period. At peak, the contract will involve 800 people, of which 360 workers and 70 staff and management will live in an on-site camp also constructed by the joint venture.

Another contract, awarded by the Debswana diamond company to a Basil Read/Bothakga Burrow joint venture (with a 70/30 split), kicked off in January this year for a 12 month period and involves the execution of Cut 8 contract mining phase one at Jwaneng mine. The Cut 8 project, the expansion of the Jwaneng mine pit, is the largest ever single capital commitment in the private sector in Botswana. The project will widen and deepen the existing Jwaneng pit as a short-term alternative to going underground. Phase 1 major works include drilling, blasting and hauling 20 million tonnes of waste.