Namdeb Diamond Corporation managing director Inge Zaamwani-Kamwi says that, in line with most products in the luxury goods sector, the diamond industry was severely affected in 2009 by the global recession. This was due to a combination of high stock levels throughout the diamond pipeline, constricted liquidity in the industry, and lower levels of retail and consumer demand. 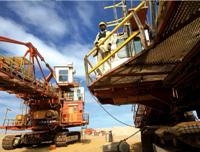 One of two aged bucket scoops at Namdeb. The machinery is used to remove mass overburden from the bedrock. Due to the change in mining plan at present the scoops are on care and maintenance.

As a result, in 2009 the number of carats sold by Namdeb decreased by 25% and production was down by 56%, with the difference in the reduction of sales and production made up from diamond inventory carried forward from 2008. The group reports that its revenue last year of some R3.2 billion was 40% lower than that of 2008 as a result of the lower carats sold along with a decline in the rough diamond prices, partially offset by the increase in stone size recovered.

Trucks loading at Namdeb’s
mining area 1 on the
Namibian coast.

The company was able to reduce production costs to about R2.7 billion compared with over R4.0 billion in 2008, including a cost of sales decrease due to initiatives such as voluntary retrenchment of some of the workforce as well as production shutdowns.

On the outlook for 2010, Inge Zaamwani-Kamwi says that 2009 presented some of the most challenging trading conditions the diamond industry has ever experienced. As a result of actions taken by Namdeb, production levels and cost base has been aligned with the reduced demand. Consumer demand for diamond jewellery is beginning to recover, driven in part by the strength of the developing markets of China and India. However, with the fragility of the world economy and perceived weakness of the global recovery post recession, the company only expects a gradual increase in production levels, sales and prices.