By August 2008 Navasota had completed a total of 36,759 metres in 2,147 drill holes in two phases of air core drilling on its Koba bauxite project in Guinea. Resource modelling and estimation work had commenced.

Navasota has the right to earn a 100% interest in the AMIG permits, which cover 1,064 km2 in the Télimélé and Gaoual prefectures of Guinea. These permit areas are located in the Boke bauxite belt, and are directly surrounded by several of the world’s major bauxite miners. 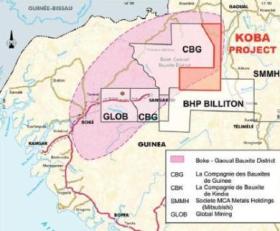 Location of the Koba bauxite project.

Navasota believes that with bauxite, the material used to produce aluminium, in high demand and tight supply the acquisition and development of bauxite resources presents a tremendous opportunity. Guinea hosts 30% of the world’s bauxite resources, and in particular its Boke bauxite belt hosts the world’s largest and highest quality bauxite deposits with grades of 40 – 60% alumina.

Three refineries have been proposed for construction in the Boke bauxite belt in the next few years, all of which will be within close proximity to the Navasota permit area. In addition there is an existing railway line approximately 16 km from the site.