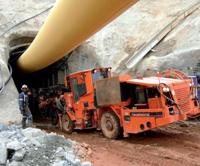 Portal at Perkoa with mining jumbo

Blackthorn Resources says negotiations with Glencore on a joint venture for the Perkoa zinc project, located 120 km west of Ouagadougou in Burkina Faso, are progressing in spite of the end of March timeframe being extended.

Blackthorn managing director Scott Lowe said at the end of March: “Completing the detailed and comprehensive due diligence undertaken by Glencore on the Perkoa project along with the drafting of legally binding documents is taking a little longer than originally anticipated.”

Mine development at Perkoa was suspended in mid-2008 and the project placed under care and maintenance due to falling global economic conditions and the rapid decline in the spot zinc price. Upon the recommencement of construction the Perkoa project will continue towards becoming the first emerging zinc mine in West Africa. Zinc mineralisation is hosted by a volcanic massive sulphide orebody situated within the Boromo greenstone belt. The Perkoa orebody contains a probable ore reserve of 6.3 million tonnes at 13.9% zinc.

Blackthorn Resources acquired 100% of the project in January 2005 and transferred a 10% interest to the Burkina Faso government in March 2007, in accordance with statutory requirements. The project, when completed is expected to achieve a plant throughput of 720,000 tonnes a year, and produce 170,000 tonnes a year of concentrate at a concentrate grade of 53%