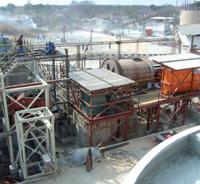 New Dawn’s Turk mine in Zimbabwe.

The completion of the acquisition is in line with New Dawn’s objective to become a mid-tier gold producer and the in-country consolidator of gold mining assets in Zimbabwe. New Dawn says that, through this transaction, it is increasing its gold resource base and associated mining capability to support a consolidated annualised production of 50,000 to 60,000 ounces of gold within the next 18 to 24 months, followed by an increase to 100,000 ounces of gold within four to five years. The ultimate goal is to reach a consolidated annualised production target of 200,000 to 250,000 ounces of gold.

Among the properties owned by CAG and its subsidiaries are the Dalny mine situated 36 km north of Kadoma in the Chakari district, some 175 km southwest of the capital, Harare. The Dalny mine consists of greater than 3,500 claims covering a strike length of some 25 kilometres. Historical production (to 2006) was 2.44 million ounces of gold from 10.2 million tonnes of ore treated at a grade of 7.42 g/t. The claims are 100% attributable to Falgold. The mine complex consists of an underground operation with an associated ore treatment plant and the potential for gold recovery from tailings material.

A third operation is the Venice mine situated approximately 28 km south of Kadoma. The Venice mine consists of over 2,500 claims, 100% attributed to Falgold, that have numerous exploration targets. Historical production (to 2002) was 318,000 ounces of gold from 2.5 million tonnes of ore treated at a grade of 3.77 g/t. The mine complex has a metallurgical facility that has capacity to process 18,000 tonnes of ore a month.

The Camperdown mine, also part of the portfolio, is situated to the northeast of Shurugwi, about 30 km southeast of Gweru. The Camperdown mine consists of nine claims, which are 100% attributable to Olympus. The orebody previously produced ore material from both a dual open pit and an underground mining operation.

There is also the Old Nic mine situated on the eastern part of Bulawayo, and which is one of the oldest gold mines in Matabeleland. The Old Nic mine consists of 17 claims, these 100% attributable to Olympus. Historical production (to 2006) was 290,000 ounces of gold from 0.98 million tonnes of ore treated at a grade of 9.44 g/t.

Falgold and Olympus have significant additional ground holdings in various parts of Zimbabwe which are considered to be geologically prospective.