New Dawn Mining Corporation is accelerating its three-phase growth strategy. This involves trebling pre-shutdown production at its re-opened Turk mine, aggressive exploration on its other properties, and consolidation through mergers and acquisitions.

It is doing so despite uncertainty about the future of the country’s mining industry. This is the message from company president and CEO Ian Saunders in an interview with Mining Review Africa.

The uncertainty in Zimbabwe revolves around recently published government regulations compelling companies worth more than US$500,000 to provide specified information, including an indigenisation implementation plan leading to 51% local ownership within five years, by 15th of April 2010.

Saunders believes that most thinking people understand that if you want to attract international capital, you have to offer an alternative to 51%. He points out that the regulations do allow a deviation from 51% for economic and social reasons, and that there is a process by which the Ministry of Indigenisation can allow a sector or a subsector to have a different number to 51%. 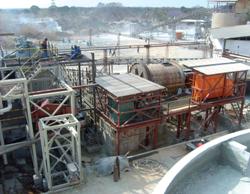 General overview of Turk mine

‘I can’t comment on whether we are going to get a settlement of substantially less than 51%. But what I can say is that we continue to engage with the Ministry of Mines, and we believe firmly that the all of the partners in the government of national unity are focused on the economic and social recovery of Zimbabwe,” he adds.

“If this is the mindset of all stake holders, investors, government, indigenous people, then you have to come up with something different for mining because of its very capital-intensive nature, and the technology and expertise that are required. With that in mind, we are not particularly concerned with the promulgation of these regulations at this point; if anything it has brought a little focus to the issue,” he suggests.

“I’m not saying that we are not worried at all about the situation, and that it can be completely discounted. What I am saying is that we are no better or worse off materially today than we were at any time in the two years prior to the promulgation of these regulations,” he points out.

“We will continue to engage with government as a company within the Chamber of Mines on this issue; we will continue to make known our viewpoints and our thoughts as an international company that is looking to bring substantial investment into Zimbabwe through our Toronto stock exchange-listed platform. And we hope that when the government actually promulgates the specific percentages and structure for the mining industry, it will take all aspects into account, and that there will be a situation where both philosophies can find some middle ground,” Saunders says. 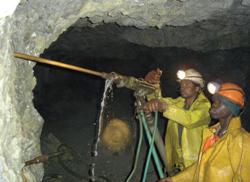 The time factor that has concerned certain people is the 45 days to complete two documents – one setting out all the details of your company, and the other laying out its indigenisation plan – how you are going to comply with the process of meeting the 51% in the five-year timeframe the regulations envisage.

“We believe that this is not an unreasonable procedure, and that it can be handled within the prescribed timeframe. Furthermore, the legislation does state that if you as a company believe there should be a different number to 51%, a different time frame, or a different structure, you should include this in your submission to the minister. Then within a 12-month period you must state specifically what percentages, time frames and processes will be used for each sector or sub-sector within the economy,” he points out.

Saunders believes that the intention here is to gather the collective mindsets and attitudes of all affected Zimbabwean companies; to find out their trigger points and sensitivities, to establish what they want to do; to take an all-embracing set of data; and then to try and make rational decisions relating to each sector or sub-sector.

“As we see it, a process was triggered on the 1st of March, and we believe that within the stipulated 45 days most members of the mining industry can and will comply with the process. Then government will study the information and make some sort of determination as to what will happen in the industry,” Saunders says. 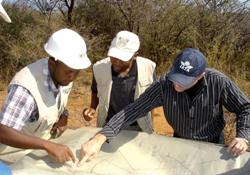 “When we have that, we will know the percentages, the timeframe and the process, and then we can look at strategic alternatives relating to how we are going to comply,” he proposes.

Meanwhile life goes on, and New Dawn is driving ahead with all three elements of its strategic growth plan.

“First of these is to ramp up production at Turk mine, and we have laid out a four-year, internally -funded growth programme at our Turk-Angelus complex to ultimately produce 35,000 to 50,000 ounces of gold a year,” Saunders explains.

“The first step was to stabilise operations at the 14,000 to 15,000-ounce mark, which was the same production level we had back in 2007, and we achieved that in September/ October of last year, on time in terms of our plan,” he reveals.

“The second phase is for us to expand production of gold at the Turk-Angelus complex to 22,000 to 23,000 ounces a year out of internally generated cash flow, and we calculated that this would take us about two years.”

New Dawn is now six months into that programme. “What has actually occurred is that the stronger gold price over the past six months has generated more internal cash flow at a higher rate; we’ve been able to reinvest more capital more aggressively; and we have actually knocked six months off that two-year time frame. This means that we are looking at another 12 to 15 months at the most, which gives us a new target date of mid-2011,” Saunders estimates.

“Our initial plan was to take another two years to reach that level by mid 2013, and nothing has happened to change our thinking.” 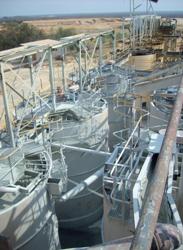 Leach tanks at Turk mine

The second aspect of New Dawn’s growth strategy involves aggressive exploration of our other existing properties. “We used the last three or four months of the rainy season to design and lay out our exploration programmes. That exploration is being designed now to use internally generated cash-flow to target-explore. The work we did in compiling the technical report, getting the target searches done, and deciding where we are going to spend our money, will be put into practice in April this year,” he adds.

“The early phase of exploration over the first six months is not expensive at all. It’s when you start drilling and trying to ramp up to JORC-compliant ounces that you spend the money,” Saunders explains. “In the next six months or so there is no impediment whatsoever from a capital perspective to generating the information and taking it forward. Then, to put a number to it, our exploration in the next year will amount to about US$2 million,” he estimates.

“The third element of our growth strategy is to look for merger and acquisition opportunities within the country. We think that there is tremendous opportunity in Zimbabwe to explore, to develop, and to bring other companies in that don’t have the same management skills and the same experience,” Saunders proposes.

“Our merger and acquisition strategy within the country is going to be executed over multiple years. The reality is that in the first phase we’ve got to look at people that are like-minded, like structured, and that can add value under our umbrella. You can’t go and merge with or acquire a much larger company.”

New Dawn is attracting interest from a spectrum of people, and the company is talking to some South African funds in terms of participating in structured financing if it is successful with its mergers and acquisitions. “We are also talking to listed entities, private companies, exploration companies, and mining companies,” he says.

“All parties in the government of Zimbabwe have indicated that ultimately the country’s recovery will be a mining-led recovery. There is tremendous opportunity, but it requires capital, expertise and time.

“We believe that we are 90% there. All we need to do is to fix this issue of ownership and indigenisation, get our politicians all focused in one direction in terms of the rebuilding of Zimbabwe and the mining industry will lead that,” he assures.

“We firmly believe that the government of Zimbabwe will deliver a different country to its people in the next ten years,” Saunders predicts. “You can look around the world, and you will find that there are few countries left where you can make real money in mining, and Zimbabwe is one of them.”