Geosearch – one of Africa’s largest exploration drilling company – has launched a new multimillion Rand initiative which allows mining companies anywhere on the continent the added dimension of ultra-deep drilling beyond 3 000 metres.

“There are existing and new mining clients that are looking to drill to these deeper levels, but to date there have been very limited resources in terms of contractors to fulfil these requirements. We have seen the gap and identified an opportunity, and have made the capital investment – both in terms of rig requirements and the necessary technology – to reach the required depths as efficiently as we can,” explained Geosearch Chief Operating Officer Buster Shipster.

“Anything up to 2500m to 2 800m is normal deep drilling, and anything over 2 800m we would classify as ultradeep,” he added. At these depths you are talking about anything from 30-plus tonnes of steel in the hole, resulting in much bigger, heavier drill equipment in terms of lifting and penetration capacity,” he explained.

“We already have three rigs adapted for ultra-deep drilling, and are busy preparing a fourth. We have basically reengineered these rigs and equipped them with down-hole tools to reach down to depths of 4 000m-plus, requiring significant capital investment,” Shipster revealed.

Geosearch is currently drilling an ultra-deep diamond drill hole south of Potchefstroom in the North-West Province for Witwatersrand Consolidated Gold Resources Limited (Wits Gold), with Geosearch International General Manager Mike Fitzgerald in charge of the operation. Drilling started last October, and has achieved a depth of 3 720m. The project is continuing, with length of contract dependent on results.

“It’s a very specific market. One cannot say there has been a surge towards ultra-deep drilling, but there definitely is a market and there is work going on in this field,” Shipster pointed out. “The difference now is that, – while there has been a very limited choice of contractors for this highly specialised work in the past – Geosearch is now able to offer the market drilling equipment capable of undertaking ultra-deep drilling, the technical expertise to be able to run it, and the financial backing to be able to support it,” he emphasised.

“We are set up to be able to handle all these elements for any ultra-deep contracts that may come our way – whether in South Africa or further afield in the continent,” he added.

Reverse circulation drilling
in the Karoo

GEOSEARCH SPREAD THROUGH SUB-SAHARAN AFRICA
Wholly-owned by Sentula Mining Limited since October 2006, Geosearch has invested in 125 exploration drill rig outfits, including ancillary equipment for both diamond core and air sample drilling, run by highly experienced and efficient operations crews. At its head office facility the company undertakes the manufacture, repair and maintenance of its own drill rigs.

“We have three major hubs with offices in Botswana, Tanzania and Mozambique, and of course our head office in Johannesburg. Essentially all of the logistics and support for the respective areas are handled out of the respective offices,” Shipster explained.

“Logistically it is much more difficult in these countries than in South Africa, because of the supply chain management that has to take place. Each hub has its own drilling equipment, but obviously if a much bigger contract was signed in a particular country and additional equipment was required, we would move it in from another area,” he said.

“Geosearch, like all other companies, experienced a downturn as of October 2008, resulting in a significant reduction in operating activity. Due to its financial and managerial strength, the company was able to adjust to these market conditions. Geosearch has realigned itself, is financially sound, and is well placed to take advantage of any exploration activity and meet future challenges in the current economic environment,“ Shipster pointed out.

“Whilst the launch of our ultra-deep drilling capability is expected to be a contributor to improved performance this year,” said Shipster, “Geosearch will also focus on other strategic initiatives”.

GROWING NEED FOR COAL-BED METHANE DRILLING
One of these is Geosearch’s coal-bed methane initiative, for which there is a growing need in South Africa and Botswana. “Here we will be drilling to release gas in coalbearing formations,” he explained. 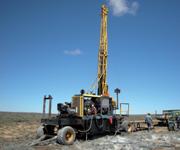 “In the past Geosearch concentrated its efforts to East, Central and Southern Africa, and we have not operated in West Africa since completing a single contract there some four years ago,” Shipster said. “We have now decided that as part of our future strategy we will assess all potential projects in the identified regions where we are not currently operating, namely countries like Zimbabwe, Zambia and Namibia, as well as Angola, Senegal, Nigeria, Mali and other West African countries, as well as the Middle East,” Fitzgerald added.

“If the requirement is manifested, we would set up an office in the relevant region to support the countries there, as we have done in Tanzania, Botswana and Mozambique,” Shipster elaborated.

“We would like to position ourselves by creating new markets and undertaking further exploration projects, thereby creating training and employment for the people in those regions,” he said.

“Geosearch prides itself on its high level of expertise developed in-house over the past 20 years; its commitment to safety, health and environmental factors; and its commitment to the training and the upliftment of all local communities where we are operational,” he emphasised. “Our rapid response to our clients’ needs, and our supply chain ability to replenish and support operations anywhere in Africa or the Middle East, no matter what the size of the operation, has differentiated Geosearch from all our competitors,” Shipster concluded.