Avnel’s principal asset is an 80% interest in Societe des Mines d’Or De Kalana (SOMIKA), with the State of Mali holding the remaining 20% interest. SOMIKA is the owner and operator of the Kalana Gold Mine located in the southwest of Mali, and is the holder of the exploration permit in respect of the 387.4 squ km site. The company’s strategic objective, through SOMIKA, is the commercial exploitation of Kalana’s existing reserves, and expansion of reserves through underground and surface exploration.

One can never see too much of
gold being poured, this
time at Kalana in Mali

Production at the Kalana Mine is increasing as new mining areas are developed. The underground mine is expected to reach the 60 000tpa design capacity of the plant once shaft deepening to new access veins is completed in 2008.

Once at full throughput, the mine is expected to produce and average of 26 000 to 30 000 ounces per annum over the next eight years of its 16-year life.

The Kalana Mine has a mineral resource base of more than 1 million ounces (measured and indicated) and 252 000 ounces (inferred). The main components are: 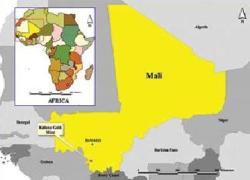 Map showing location of the
Kalana Mine in Mali

Furthermore, Snowden has concluded that there is reasonable potential to define additional reserves from indicated and inferred resources through continued mine development and exploratory drilling.

Avnel intends to identify other gold resources on the property and to add these to the existing 1.25 million ounces at the Kalana Mine. A strategic development plan can then be implemented to allow the company to grow its production profile within five years. Excess cash flow from the Kalana Mine will be used to expedite the exploration and development activity, and to fund corporate costs.