Mano’s principal iron ore asset is the Putu Range project in Liberia, for which the company has a three-year exclusive exploration licence.

Covering an area of 425 km2 in the Grand Gedeh County of Liberia, the Putu Range lies approximately 100km north-east of the potential deep water port of Greenville. The deposit is about 200 km south-east of the 1 billion tonne Mt. Nimba iron ore project that straddles the border with Guinea, and which is being developed at a reported cost of US$1 billion (R7 billion) by Mittal Steel. It consists of a series of north-south trending ridges of which the most easterly – the Mt. Jide ridge project – has been the focus of work to date.

“A 4 000 m first pass drilling programme we have launched at the prospect – in conjunction with mineralogical and metallurgical test work – is expected to take about five months to complete,” says Mano CEO Dr. Tom Elder in an exclusive interview with Mining Review Africa. “Given the fact that the target is 12 km in strike length, encouraging results will necessitate a followup programme of at least 6 000 m as part of the prefeasibility, which is scheduled to begin in Q4 of 2007. This study will not be completed before the end of 2008 at the earliest,” he adds.

“This will be followed immediately by a full feasibility study which – in addition to all aspects of the mine and plant – will encompass the design and costing of the rail route and new port facilities,” Elder reveals. “This is a major task which will take a couple of years and cost tens of millions,” he estimates.

NO DECISION TO MINE BEFORE 2011
“Starting at the beginning of 2009, this means it will be early 2011 before we have a decision to mine, and from the start of construction to the point of commissioning the plant will involve another two to three years. In other words, production would not begin before 2013/14,” Elder contends.

The plant at the Kono diamond
project in Sierra Leone

“Also bear in mind that iron ore mines are established on the basis of long-term contracts with end consumers, and these have to be negotiated and signed before construction of the project can start,” he explains.

This makes good economic sense in terms of the capital expenditure involved in such an undertaking. It is difficult to give an accurate picture of the cost at this early stage before the pre-feasibility and feasibility studies have been completed, but Elder estimates that it will fall somewhere in the range of US$500 million (R3.5 billion) to US$1 billion (R7 billion) – and possibly more.

“It is also impossible to pin down production at this stage,” he admits, “but it could be of the order of 10Mtpa.” Reports from early exploration work suggest that the Mount Jide ridge contains reserves in excess of 500 million tonnes of non-NI 43-101 compliant iron mineralisation with grades of up to 67% Fe. Little is known about the other ridges to the west, but the suggestion is that deposits there are of lower grade, and it seems unlikely that other mines would be established there.

Turning to Mano’s flagship gold project – New Liberty in Liberia – the plan is to launch production before the end of 2008, which will make it the country’s first gold mine. The company owns 90% of the New Liberty gold project, where a feasibility study has defined a proven openpittable reserve of 4.4 Mt grading 3.9 g/t of gold at a 1.2 g/t cut-off for 550 000 ounces.

POSSIBILITY OF UNDERGROUND MINING
The Mano plan is to mine New Liberty’s open pit reserves of 550 000 ounces at a rate of 70 000 to 75 000 ounces pa, which will give it a life of seven years. There are, however, ambitious plans in mind for a future move from open pit to underground mining at New Liberty.

“We are now starting with detailed analysis and assessment of all the relevant and available data,” Elder confirms, “and we are about to start a deeper drilling programme to help us design the move from open pit to underground mining. Early indications suggest a yield of at least 100 000 ounces in the first year, and given the nature of this Archaean greenstone gold ore-body, a much longer mine life is expected for the underground operation,” he adds.

The required capital expenditure for the project will remain at around the US$60 million (R450 million) mark. “The banks remain very interested, and we do not envisage any problems in raising project loans of the order of some US$40 million (R280 million),” Elder believes. “The remaining US$20 million (R140 million) will come from equity’’.

In neighbouring Sierra Leone, Mano’s joint venture partner Golden Star Resources is pressing on with a major drilling programme in the Sula Mountains project, in terms of a US$6 million (R42 million) agreement between the two parties. 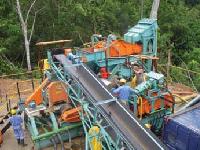 NEW MOVES IN GUINEA, LIBERIA AND SIERRA LEONE
In Guinea, Mano has suffered a delay in its gold exploration project through the withdrawal of its joint venture partner, Navasota Resources Limited, to concentrate on its bauxite interests. “Early results at this gold project are encouraging,” Elder points out, “and a recent 12-hole programme has included results of 43.97 g/t of gold over a 4.0 m width. A new JV partner is being sought to pursue these promising gold licences,” he reveals.

Turning to diamond exploration at the Kono project in Sierra Leone, joint venture partner Petra Diamonds has suffered serious problems in shaft-sinking – a combination of 3m of annual rainfall and very soft ground – but these are now being overcome. The shafts are at their target depth of 30 m, and lateral development to map and sample the dykes is well underway. “A production decision is expected towards the end of this year,” Elder states.

Elsewhere in Sierra Leone drilling has commenced to test a series of kimberlite targets in the Tongo area. This joint venture is being funded by Mano’s partner, BHP Billiton.

“In Liberia,” Elder continues, “JV partner Trans-Hex of South Africa has established a bulk sampling facility on-site at Weasua, and has started processing 10 000 tonnes of ore from diamondiferous kimberlite pipes discovered by Mano.”

Elder concludes by revealing that in Guinea, construction of the Mandala alluvial diamond operation is underway, with production forecast for early 2008.