Total Coal South Africa (TCSA) has announced that it is to construct a new mine in the country which will boost its coal production by more than 40% from the current 3.2 million tonnes per annum (mtpa) to about 4.4 mtpa by late 2011.

A wholly-owned subsidiary of Total, TCSA has been operating in South Africa for 30 years, and is currently the fifth-largest coal exporter in the country.

Announcing the new mine in an interview with Mining Review Africa, TCSA managing director Jean-Pierre Junqua confirms that the new mine will produce 2.0 mtpa of export coal. It involves mining seam four on the eastern side of the Dorstfontein complex, and will be named Dorstfontein East.

The current 700,000 tpa output at the existing Dorstfontein mine, which is mining seam two on the western side of the Dorstfontein complex, is scheduled to finish at the end of 2012. Between September 2011 and the end of 2012, Dorstfontein East will produce 2.0 mtpa and Dorstfontein 700,000 to 800,000 tpa. Then Dorstfontein will close down and the complex will consist only of Dorstfontein East, producing 2.0 mtpa. “It will be an opencast development lasting about seven years and then we will move underground for an additional 15 years, giving a total life of mine of about 22 years,” Junqua says.

“The objective is to build a large washing plant which will be able to handle some 4.5 mtpa run of mine, and we will also build a rapid load-out and railway siding. Production at the new mine is scheduled to start in mid-2011 and ramp up to full production in September/October 2011, enabling Total Coal to use all of its Richards Bay Coal Terminal (RBCT) entitlements.” The company owns 5.68% of RBCT before the Phase Five extension.

“Our R200 million Forzando South underground mine, which is situated 180 km east of Johannesburg, started production in 2007, and is producing about one million tonnes of saleable coal a year. Life of mine for Forzando South, which is wholly owned by TCSA, will be more than 20 years. 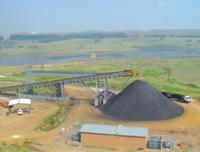 Newest contributor to Total Coal
production is the Tumelo mine.

Forzando North is TCSA’s flagship project. Fully owned by the company, it produces about a million tonnes of saleable coal a year, and has a life of mine of about another 10 years.

The Dorstfontein mine, 74% owned by Total, with Mmakau Mining owning the other 26%, produces a million tonnes of ROM coal per year, and a yield of 70% plus results in more than 700,000 to 800,000 tonnes of product. Life of mine at Dorstfontein will be another five to six years.

A major new contributor to the company’s increase in production is the Tumelo mine, near the Hendrina power station, which reached full production in June last year.

Tumelo is 51% owned by Makau Mining, an empowerment mining company owned and chaired by Bridgette Radebe, with TCSA holding the other 49%. Total has been responsible for the development of the mine, while Makau is handling operations.

Overall cost of the project exceeded R100 million, but this price was relatively low, because initially there is no washing plant and siding at the new mine. The coal is washed at Forzando North where the two washing plants are running in parallel, and the Forzando North siding is used.

Looking at the overall picture, TCSA mines tend to lean heavily towards the international market, and while their breakdown of coal production varies slightly, it is usually about 80% to 85% for export and 15% to 20% for domestic use. 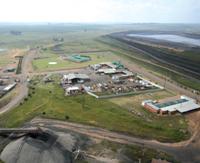 “As far as the future is concerned, Total Coal is looking at growth opportunities of course, and we have some definite ideas to how to achieve this,” Junqua states.

He points out that a big difficulty has been last year’s significant reduction in the coal price. “It peaked at about US$150/tonne in 2008, and then in 2009 it dropped to only US$55/tonne. Also the exchange rate, which was about R10.5/$ at the beginning of 2009, is now around R7.5/$. Both of these developments had a huge negative impact on our activities and on the industry in general,” he says.

“Our projects in South Africa are significant, long-term investments, so whatever the market is, bullish or depressed, we remain calm and work on ourselves,” Junqua explains. “Our main focus is on improving our cost structure, and secondly to build Dorstfontein East on time and within budget.