On Surface and at Depth

From being a minor part of DRDGold’s production profile, the South African mid-level producer’s surface operations are now as important as its remaining deep level operation Blyvooruitzicht.

DRDGold has changed a lot over the past few years and arguably has come a long way since it was known as the Roodepoort Rocket, essentially a leveraged play on the gold price. “In those days it was easy to go to the market and obtain funding to keep its deep level operations going that sat upon large resources, much of which in reality were never likely to be mined,” DRDGold CEO Niel Pretorius says. “That model changed after 2002 when the price of gold shares had skyrocketed and mines were selling their gold at, for then, a high R120,000 per kg. Perhaps it was at about that time when investors saw the option on gold resources which would cost billions to access had matured, and/or had became more aware of the flaws in that model.”

The company had to do something different, like improve its actual cash flow and revenue generation, and that resulted in the bifurcation of the company into its underground and surface operations, the latter having been a sideline previously.

“We bought out the share of the Crown surface mining operation’s BEE partner, Khumo Gold, which then took a 15% stake in the whole DRDGold group, and also re-established the Ergo operation to generate cash flow to sustain our deep orebodies. We are thus self-funding and do not need to go to the market for the capital to keep access to those deposits open and operating.”

Pretorius says the company’s surface mining operations are now part of its core focus, and not just there to provide support to the existing underground operations. DRDGold has invested some R675 million on its surface reclamation projects, including the purchase and rehabilitation of Ergo, and the upgrade of pipelines.

AT DEPTH
Of its two underground assets, ERPM located on the East Rand of Johannesburg, is on care and maintenance. Pretorius says that DRDGold had been looking to sell ERPM at the salvage value of its assets, but got no offers that reflected this value. “The mine’s environmental liability lies mainly with its surface tailings, and most of this will be mined away through tailings reprocessing. Thus ERPM does not have environmental issues that would lead to it being sold for less than its salvage value. When we did not get reasonable offers we decided not to sell it. The mining rights conversion for this mine is still pending and we will review our position on ERPM from time to time.”

ERPM is part of the water pumping chain on the East Rand, where various committees have been established to discuss the issue of responsibilities for keeping the water levels down, without ever achieving a consensus solution. ERPM has received some funding from government to undertake pumping, but in the end Pretorius opted to spend R30 million to establish pumping facilities to ensure water does not get above the 300 metre level. It will ensure that no flooding occurs above the key depth of 150 metres below surface, this being the point at which groundwater would become contaminated. Central Rand Gold, which could be undertaking its water management pumping plans at the 600 metre level of its operations, could have an effect on ERPM, but Pretorius does not want to count on that. “Even though South Africa has had good rainfalls for 10 years, the value of the water resource is not to be underestimated in the future. We must always remember that we live in a water scarce country.”

On the possibilities of resuming production at ERPM, he says, “We need to ascertain what the capital cost would be to establish the infrastructure to develop the next phase, ERPM extension 1. That would have to be available for production 24 months after recommissioning.”

Blyvooruitzicht now operates well within the capacity of its three producing shafts, 4, 5 and 6, and by volume mainly mines the Carbon Leader Reef. There are plans to extend the mining of the largely untapped Main Reef, which is situated in the hanging wall 75 metres above the Carbon Leader. “We are spending about R1 million a month opening up access and doing development on increasing the mine’s volume of production. “Blyvooruitzicht, which has a life of mine till 2025, has been producing ore at the rate of some 60,000 tonnes a month and our plan is to expand this to 90,000 tonnes a month. The expansion will take place over the next three years.” 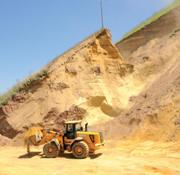 The Top Star tailings where
mining is underway

ON THE SURFACE
The refurbished East Rand situated Ergo project, which will over the next decade and longer processes tailings from the Elsburg complex and what is known as the L29 dam, is being supplied via a twin six kilometre long pipeline established last year. Mining of the tailings is by water jets, with this material sumped to a screen before being transported via the twin pipelines to the Ergo facility itself.

Ergo’s first phase production ramp-up, which began in the second half of last year, went well. Pretorius says the technology adopted is working to specification, though inevitably there were some minor technical issues that had to be resolved, such as a mismatch between the initial screening and the coarseness of the material.

Ergo’s elution facility was commissioned in March 2009. Ergo is processing 20,000 tonnes of material a day, in line with its planned first phase processing rate of 600,000 tonnes a month. Ergo will soon ramp up to its doubled up second phase capacity and this is scheduled to be completed by September this year. “The second line will be in place in July and it will take three or four months for the solution to saturate the circuit.” It will see this surface operation produce 75,000 ounces of gold a year, and at steady state at a cost of R23/tonne.

The production cost per ounce is about US$550/oz, which is close to a true reflection of the actual cost from now on, as surface reclamation mining requires very little stay-inbusiness capital expenditure.

DRDGold’s other surface mining division is its Crown operations located on the central West Rand, and which includes the 5.46 million tonne per annum (mtpa) Crown, 2.70 mtpa City Deep, and 3.60 mtpa Knights facilities. Counting both the Crown and Ergo operations, and excluding the tailings treatment at Blyvooruitzicht, Pretorius is expecting DRDGold’s surface mining operations to ramp up to a maximum of 1.8 to 2.0 million tonnes a month.

The Crown operation is currently reprocessing the 5.2 million tonne 128,000 ounce Top Star mine dump in a 30 month project. Top Star is being processed at 170,000 tonnes per month with a recovery grade of 0.775 g/t.

However, the Crown operations have been using the Nasrac deposition site next to the Rand show ground outside Soweto on the West Rand for over 20 years and this is reaching the end of its capacity. The Knights operation has a remaining life of some eight years, but the effective life of the other two plants will be curtailed after Top Star unless further investment is made.

“With gold tailings surface retreatment operations on the Rand, it makes sense to work backward. You first get a deposition site, and then the pipeline servitudes and after that the processing facilities. The tailings themselves are plentiful, but without the other elements they are nothing more than what they have always been – mine dumps,” Pretorius says.

Thus, as with Blyvooruitzicht, while DRDGold’s surface operations have massive resource numbers, it is not necessarily an indication that these ounces will all actually be mined out within our lifetimes. The numbers are impressive, though. With 1,700 million tonnes of tailings on the East and Central Rand, which can recover up to 15 million ounces of gold, these operations could still be producing many decades into the future, depending on the gold price. The Elsburg and L29 dam tailings alone, from which the recovery rate is about 50%, will account for 12 years of production.

This means that the next major decision DRDGold will have to take on its surface operations is to commit to a 40 kilometre pipeline from the central West Rand operations to the deposition sites next to Ergo. These are the existing Brakpan site with five years of life left and the next to be used long life Withok site adjacent to it. “It would entail an investment of some R200 to R250 million and it is a proposal I will take to the board this year,” Pretorius says. “The servitudes for the pipelines are in place; we originally thought that taking the pipeline under the roads may be a problem, but it won’t be due to the fact that we have invested in rubber lining the entire pipeline.” Without such an investment the life of the Crown operations will be limited beyond the Top Star project.

With the pipeline, the Crown and City Deep operations could continue and pump waste to Ergo’s deposition sites, or be used as milling circuits and then have their output pumped to Ergo. The alternative would be to shut those down and transfer the personnel and expertise to Ergo. “If the gold price was still US$500/oz we would be doing that.”

However, Pretorius says, after the pipeline there are no major plans to expand from the 2.0 million tonne a month level, provided by Ergo at 1.2 million tonnes per month (tpm), some 400,000 tpm from Crown and City Deep with the Knights operation providing 240,000 tpm. All this would entail a steady state 120,000 to 150,000 ounce a year gold operation.

The volumes may sound large, but Ergo in its Anglo American heyday processed three million tonnes of tailings a month, and other companies such Harmony as well as Gold Fields, which is looking at reprocessing 750 million tonnes of tailings, could have surface operations that dwarf that of DRDGold. This is even if one includes the surface production at Blyvooruitzicht which gives that mine some flexibility as a result.

DRDGold has also been doing a feasibility study on the possibility of establishing a uranium recovery plant at Ergo, but Pretorius says the urgency with which this is being undertaken has been reduced. “We still have a full time engineer focused on the investigation with R12 million being spent in 2009 to test the characteristics of extracting the uranium and producing sulphuric acid. However, the technology is complex and if Anglo with its technology could not extract more than 13% to 25% of uranium the project to do this would be very sensitive to these numbers and uranium price.”

Pretorius says the company has a duty to its shareholders to investigate the resources it has. But a uranium plant would cost R3 billion, without any modular phased build up possible. This is equivalent to three quarters of the company’s market cap. Add the factors that the project is reliant on uranium prices staying reasonably high and is technically risky, the reasons for a lack of urgency on the project are obvious. “At the moment the outlook for a sulphuric acid project is better and it turns out that the production of uranium would be done at the expense of sulphuric acid production potential and vice versa. There are a lot of uranium projects planned, but in southern Africa there is a demand for sulphuric acid.”