Order book could exceed US$1.2 billion

MDM Engineering (MDM) – an AIM-listed and Johannesburg-based minerals process engineering and project management company – has come through the past year of global economic crisis with flying colours, and is currently at the execution stage with three South African projects worth just under US$600 million (R4.8 billion).

Revealing this in an interview with Mining Review Africa, MDM executive director George Bennett pointed out that the company was either conducting or had recently completed another dozen scoping-, pre-feasibility-, or bankable feasibility studies for projects in South, Southern and East Africa which would be worth well over US$ 1.2 billion (R9.2 billion).

“We have a conversion rate of 96% of our studies becoming actual projects for us,” Bennett revealed. “That means that, even if we work at a conservative conversion rate of only 80%, we will have close to US$1 billion of work in the pipeline over the next two to three years,” he calculated.

“MDM’s team has completed some 54 bankable feasibility studies and has constructed 52 metallurgical plants, all of which are producing at above design capacity. The projects have been spread across 14 countries – mainly in Africa – and have covered a broad cross section of minerals,” said Bennett. “Our projects have focused on gold, uranium, base metals (including copper, nickel, zinc and tin), ferro metals (including manganese and ferrochrome), diamonds, industrial minerals, and more recently platinum and coal. 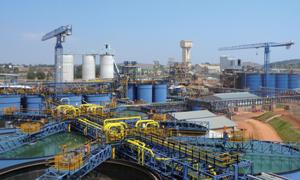 EZULWINI GOLD AND URANIUM PLANTS COMPLETED
“Looking at recently completed and current projects, we have finished the Ezulweni gold plant for First Uranium. Having done the bankable feasibility (BFS), we were awarded the full EPCM and project management contract. This plant has a throughout of 2.4 Mtpa and cost US$65 million R520 million),” Bennett revealed.

MDM also handled the BFS, and was awarded full EPCM and project management contract, for the Ezulwini uranium plant at Randfontein. This 1.2 Mtpa operation cost US45 million (R360 million).

Looking at current projects, MDM is commissioning phase one (the gold section) of the Mine Waste Solutions (MWS) gold and uranium project for First Uranium Corporation at Stilfontein. The uranium section will be commissioned towards the end of the year. This project will deliver a throughput of 1.28 Mtpm for uranium and 650 000 tpm for gold. “We have the full EPCM, construction and project implementation contract – a project worth US$150 million (R1.2 billion),” he said.

“First Uranium Corporation has also awarded us the contract for full EPCM construction and project implementation of phase two of the MWS project. We have just started on this contract – an US$80 million (R640 million) commitment,” Bennett added.

“Thirdly, we are doing the front end engineering and design for Kalahari Resources (Pty) Limited’s Kalagadi manganese project in the Northern Cape,” he revealed. “This part of the project will cost an estimated US$350 million (R2.8 billion). We completed the BFS last year, we were then asked to go ahead with the front end engineering, and now we’re busy with the detailed engineering design for execution of the sinter plant in May next year,” he added. The plant will have a throughput of 3Mtpa.

“The second half of the Kalagadi project involves a furnace at Coega in the Eastern Cape, and will come in at about another US$350 million (R2.8 billion),” said Bennett. 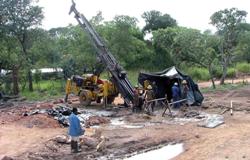 A drill rig at the Kalukundi copper-cobalt
project in the Katanga province of the DRC,
where MDM has completed a BFS for Africo
Resources Limited

BULGING PIPELINE OF FEASIBILITIES
“A scoping study has been done, and Denison Mines Limited has awarded MDM the contract for a definitive feasibility study to fast-track the Mutanga uranium project in Zambia. This project will involve a plant throughput of 2 Mtpa, and has an anticipated value of US$70 million (R560 million,” Bennett continued.

“We have completed a BFS on the Kalukundi copper/cobalt project in the Katanga province of the DRC for Africo Resources Limited, finalised infrastructure design, initiated long lead item procurement, and developed a fast track schedule,” he added. “The front end engineering and design contract was underway when it was put on hold because of some legal and funding issues Africo experienced in the DRC, and then came the credit crunch,” he said.

“But that project is still very much around and will go forward once funding and permitting are settled. Capacity will be 800 000 tpa, and project value is anticipated at US$175 million (R1.4 billion),” Bennett added.

He pointed out that MDM had also been appointed to manage construction of Metorex’s US$60 million (R480 million) Kinsenda copper project in the DRC when that was put on hold due to project finance prospects vanishing during the financial crisis of 2008. “That project is on hold, although at some stage it should be resumed,” he said.

“Both of these projects are out there on the back burner, but at some stage they will be built,” Bennett assured. MDM has finished a BFS on the Agbaou gold mine in Côte d’Ivoire for Etruscan Resources. The plant will have a planned throughput of 1.5 Mtpa.

In addition to these studies, several more have been awarded to MDM. The company has just been contracted by one of the large gold mining companies, which does not want to be named until all the details are finalised, to conduct a bankable feasibility study for a tailings re-treatment project in South Africa. The plant will be designed to handle a throughput of 900 000 tpm.

“The value has not yet been made public, but it is “very big”, and they are looking to start execution by the middle of 2010. It is likely to have a value of anywhere between R1.5 and R2.5 billion,” Bennett estimated.

Drill team at work at the Agbaou gold Mine
in Côte d’Ivoire, where MDM has finished
a BFS for Etruscan Resources

NEW PROJECTS IN ZIMBABWE, TANZANIA AND MOZAMBIQUE
“We are also undertaking a BFS for Todal Mining’s Bokai platinum project in Zimbabwe,” Bennett continued. “Todal is a subsidiary of Central African Mining and Exploration Company (CAMEC). The new operation will have a capacity of 140 000 tpm. We are expecting execution to start in the final quarter of this year, and it will take about two years to complete,” he added. “Anticipated project value is US$120 million (R950 million).”

Also on the books for MDM is a pre-feasibility study for Mantra Resources – an Australian uranium junior – on its Mkuju River project in Tanzania. The plant will be designed for a throughput of up to 3.7 Mtpa, and the project will cost an anticipated at US$200 million (R1.6 billion). “After MDM completed the scoping study for Mantra, the pre-feasibility study aims to refine the process route, as well as both operating and capital costs. MDM will also receive a tender for the BFS, which is scheduled to commence in December 2009. “Mantra are aiming to start project execution as early as the third or fourth quarter of 2010,” Bennett pointed out.

“Another scoping study we will be handling is for Rand Uranium on the Cooke uranium project in South Africa,” Bennett revealed. “It is actually a gold and uranium tailings project with each module having an anticipated capacity of 450 000 tpm. No value has been attached to the project at this stage,” he said. The scoping study will hopefully be followed by a pre-feasibility study and a BFS.

It’s also just been announced that MDM will be conducting a pre-feasibility study for a coal project in the Tete province of Mozambique. “There is no project value as yet, but this is a big one,” Bennett observed. “It will have a throughput of 50 Mtpa.”

“In addition to the above, there are several projects on which we prepared initial studies, and are waiting for clients to complete permitting and funding arrangements,” he stated. “These include Eastern Goldfields, with the Lily gold mine in the Barberton area of Mpumalanga, and Etruscan Diamonds with an alluvial diamond mine near Ventersdorp.

MDM IS GROWING AND CONFIDENT
Despite the global economic meltdown, MDM claims to be growing month on month, as opposed to many of its peers who are retrenching staff.

“Certainly for the next three years we are pretty confident that we’ve got a very good order book and a very good pipeline of feasibility studies and potential projects,” Bennet declared.

“We still have the two projects on the back burner in the DRC. We have been involved in two copper projects which I think could come back to us quite soon,” he added. “I do believe that at the current price (having doubled this year), copper projects are going to start coming back on line. The same also applies to some of the other commodities,” he continued.

Copper and certain other commodity prices are improving and I think – with our uranium knowledge and experience, plus the fact that we are strong in gold and the gold price is good – we’ll start to see copper projects coming back on line, and some good gold projects coming toward us,” Bennett predicted.

“As far as international projects are concerned, quite frankly we have been too busy in Africa to look at anything further afield,” said Bennett. “We have had a couple of approaches for projects overseas, but we have just not had the time,” he concluded.