Simmer & Jack Mines Limited (Simmers) – an emerging South African resources company with significant gold and uranium assets – has moved out of the junior league once and for all, and has claimed its place as an established mid-tier gold producer.

Making this claim in an interview with Mining Review Africa, Simmers CEO Gordon Miller explained that the R600 million acquisition of the Tau Lekoa mine from AngloGold Ashanti Limited – which is set to close on 1 January 2010 – brings the group one step closer to its million ounce per annum goal. 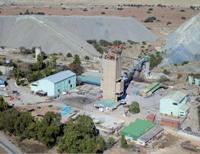 Buffelsfontein gold mine’s Number Five Shaft is in the final phase of rehabilitation, following a seismic event which closed the shaft in 2005.

The mine – which incorporates Tau Lekoa and the two adjacent targets of Weltevreden and Goedgenoeg, – is being acquired by Buffelsfontein Gold Mine (BGM), and is set to contribute 130 000 ounces per annum at cash costs of US$500 per ounce over the next three years, thereby doubling BGM’s anticipated production and cash flow.

“This acquisition will take us out of the junior league once and for all and put us into the mid-tier,” Miller said. “In fact we are becoming the fourth largest producer of gold in South Africa behind AngloGold Ashanti, Gold Fields and Harmony – quite a milestone if you think that we were doing 10 000 ounces in 2004,” he pointed out.

Miller went to say that size is one aspect, but it was not always about size – “we are not growing for the sake of growing. It’s about accretive growth, and this transaction does that for us too, giving us size, economies of scale and robust cash flows,’ he added.

Tau Lekoa is a modern mine by anyone’s definition. “It’s one of Anglo’s newest mines, and Anglo is hugely competent in building projects,” Miller stated. “It’s very efficient, it’s one of the newer operations, and being only 12 km away, we are bolting it onto Buffelsfontein gold mine and giving BGM a new and improved risk profile,” he said.

“There is no doubt that the acquisition of Tau Lekoa is very much a company transformative transaction,” Miller emphasised. “It doubles Buffelsfontein production immediately in 2010, and it changes the risk profile. It offers economies of scale benefits and synergies in terms of processing and management – and there are a whole lot of opportunities that become available as a result of those synergies,” he added.

Headgear of Simmers’ new
acquisition – the Tau Lekoa
gold mine

WELTEVREDEN FEASIBILITY UNDERWAY
Looking at the other two properties, first there is Weltevreden, where the ore body comes very close to surface and there is definite potential to expand and build a new mine. “We have raised capital for, and are busy with, that feasibility study at this time,” Miller revealed.

“We may actually develop a new mine that was started by Gencor and stopped in the late nineties,” he said. “Gencor put in big infrastructure at Weltevreden, and while it does not fit Anglo’s criteria – they build very large mines – it certainly is within our means. So there is certainly potential to expand Tau Lekoa, with Weltevreden showing a resource of at least 2.3 million ounces at a grade of 4.17 g/t at this early stage,” he pointed out.

“We haven’t got a final date for completion of the Weltevreden feasibility study,” Miller conceded. “We have started the process and Anglo have been very co-operative in assisting us with that work. There already is a feasibility study from Anglo, and all that we have to do is optimise the study, which is a much quicker process,” he explained.

“We need to do interim drilling to tighten up the gold distribution at the front end of the project, and once that is complete we will be able to calculate a time frame for the feasibility study. Too soon to tell at this time, but it does not need much work, and we should be ready for a decision in under a year,” he estimated.

The property has a 3 million oz inventory, but it is not classified at this stage as a resource at the required grade of 7.8 at a cut-off grade of 2.5 g/t. “All that it needs is a depth extension of another 800m shaft to get us there, which – in the big scheme of things – is still shallower than we are mining at Buffelsfontein right now,” he pointed out. “That will be the next feasibility study we tackle after we have banked Weltevreden.”

A schematic section of Tau Lekoa, showing the proximity of the Goedgenoeg and Weltevreden properties, in relation to the main shaft

CHALLENGE IN SA IS INVESTOR BASE
Against this background, Miller believes that to some extent the impression that South Africa does not have shallow ore bodies left to mine is false.

“What is definitely the challenge in South Africa is the investor base,” he said. “Investors are not prepared to take on new gold projects. In other words, the fundamental investors in South Africa are much more focused on profit-generating type businesses, rather than investing in long-term gold development projects which, as we all know, take time,” he explained.

“There are still ore bodies around which are quite capable of generating very significant returns – unfortunately we just do not have that appetite in this part of the world at this point in time,” he emphasised.

“Simmers hopes to change all that – that’s what our strategy is all about. We will do the work, and good projects will always attract capital, provided you can do the technical work and put it on the table in front of investors,” Miller insisted.

“When you are transforming from junior league to mid-tier league you become more relevant to the investor universe in South Africa,” he pointed out. “We are JSE-listed, and if you go and talk to the majority of the funds, you will find that if they are investing in gold they will go for the top three names – AngloGold Ashanti, Gold Fields and Harmony,” he added.

“If we can step into that space and provide the fourth opportunity, it will be highly significant for us. You do need size, you do need a balance sheet, and you do need critical mass to be able to break into that universe,” Miller insisted.

“We are not quite there yet if you look at our share register, so it is essential for us to do accretive transactions that get us into a place where we become more relevant, the cost of our capital comes down, and we have the ability to leverage off that and to continue with our regional consolidation strategy,” he declared. “We believe a lot can happen in the next few years, and we certainly hope so, as long as it is accretive,” Miller continued. “We don’t want to grow just for the sake of growing, because that can also destroy value if you don’t do it properly,” he warned.

Miller pointed out that Simmers also had other resources sitting there which – in a higher gold price environment – it would look to developing – projects like Strathmore. “This property has a huge resource three times that of Buffelsfontein, but it’s conceptual, and it is at depths of 2 700m,” he said.

“Yes it is deep,” he conceded, “but it is technically possible to mine it, and it is well within the realms of our current technology to be able to access mines like Strathmore. Right now, however, our investors are not interested. They say don’t spend money on it now – but in a higher gold price environment that could change dramatically,” he added.

“There are other possibilities we have in mind for the longer term. It is within our control and within our boundaries, and we have the permits – it’s simply a question of economics,” Miller concluded.