Village Main Reef Gold Mining Company, which is looking to build itself into a new generation mining group and in June, moved onto the JSE’s Platinum and Precious Metals sector, acquired a controlling stake in Lesego Platinum earlier this year.

Village Main purchased Lesego and some of its partners in the Phosiri platinum project, located in the Limpopo province some 300 km from Johannesburg, for just over R500 million. This values the inferred resource, which is fully funded through to bankable feasibility study (BFS), at US$3.20 an ounce. The transaction gives Village a 77% economic interest in the project, or 21.3 million ounces of 3PGMs and gold.

Dorian Wrigley from Umbono Capital, which is the majority BEE partner in Village Main Reef, and who is CEO of Lesego tells Mining Review Africa that in February this year, Lesego commenced feasibility work for the project. If the results prove positive the BFS is expected to be completed within three years, before the end of 2012. Lesego has R142 million of existing capital raised from the Industrial Development Corporation to fund the project up to the BFS stage.

Lesego had planned a stock market listing in 2008, but the start of its roadshow to raise funds and interest coincided with the global economic meltdown. “As it turned out our timing could not have been worse and clearly we could not list in that space,” Wrigley says. “The Village deal changes all that for us. With Lesego as the anchor investment, our new 60% BEE shareholding and access to capital will give Village the momentum it needs to develop into a new generation mining company.”

Phosiri is now focusing on a 62,000 metre three phase drilling campaign. “The first phase, which will involve nine holes and some 18,000 metres of drilling, should be completed by September this year.”GeoServe and MSA are key contractors in this phase of work, and the goal of the drilling is to find additional resources, firm up existing resources and explore the shallow potential of the Phosiri project. Evidence of mineralised material at shallow depths does exist, though this has yet to be definitively proven.

The first phase of drilling will roll into phase two. There are currently three drill rigs on site but this will expand to six in phase two. At the same time the project will continue with metallurgical test work, environmental work and scoping study this year. The third part of the drilling programme should be complete by the end of 2012.

Based on the results to date, the project’s Merensky resource suggests a grade of 6.08 g/t and is anticipated to have a reef width of 1.5 metres, compared with the 1.2 metre industry average for that reef. Based on the available knowledge to date the UG2 resource is anticipated to feature a grade of 6.7 g/t over a reef width of 1.2 metres, compared with typical UG2 reef widths of 0.8 m. While drilling at this stage is only indicative, the orebody looks as if it will be a favourable one in context of the platinum mining sector. 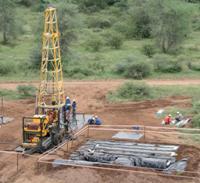 Drill site at the Phosiri project.

Wrigley says that at platinum prices of US$1,300 to US$1,400/oz the project should be robust. In addition the orebody appears to contain significant nickel and copper credits, which are highly sought after, and is likely to attract favourable interest from smelters.

The Phosiri platinum project is a result of an upthrust of the Phosiri dome that brings the Merensky and UG2 reefs to mineable depths, which otherwise would not have been the case in that part of the Bushveld Complex. Exploration over the past 25 years focused predominantly on the dome’s southern flank as opposed to its eastern flank, where Lesego has been active.

The current Merensky resource is defined from 1,000 to 2,000 metres and is open at depth. The UG2 lies approximately 200 m below the Merensky. The drilling so far has shown the reefs to be gently dipping, fully developed and undisturbed. A scoping phase will be undertaken shortly and will investigate options such as whether or not to develop one or two production shafts.

There are a number of PGM mines and projects in the immediate vicinity of the Lesego properties. Lonmin’s Limpopo operations lie about 20 kilometres to the west. This mine, previously owned by SouthernEra (Messina platinum mine) went into production in 2001. Production at Lonmin Limpopo operations increased from 212,000 tonnes to 872,000 tonnes in 2007 and subsequently went into care and maintenance.

Bokoni platinum mine is situated some 25 km to the north-east of the Lesego properties. The mine went into production in 1968 representing a joint venture between Anglo Transvaal and retail supermarket chain OK Bazaars. Canadian listed explorer Anooraq Resources recently bought it from Anglo Platinum.

Wrigley says that Village Main’s purchase of Lesego is only the first phase of its strategy. It plans to complement this deep level longer term project with cash generative platinum and gold projects. 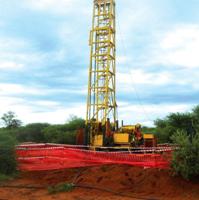 Drill rig at the Phosiri project
which is undertaking three
phases of drilling over the next
year and a half.

Taking into account the usual timing of projects of this nature, Phosiri could be commissioned in, say, 2017 and would ramp up to full production by 2019, by which time South Africa should have emerged from its energy crisis. Similarly it is anticipated that water supply projects such as the much discussed Olifants River scheme would be in place in what is a relatively dry part of South Africa. “Once that scheme is completed, there should be sufficient water for the current projects envisaged in that area,” Wrigley suggests.

Unless some unpleasant surprises occur as exploration progresses at Phosiri, the quality of orebody suggests that this project will be developed. It compares favourably with other PGM projects in terms of resources, grade, mining widths and therefore relatively low operating costs per ounce.

Meanwhile Wrigley says that Village will look to complement this anchor investment with cash generative opportunities in South Africa and abroad. “This will move us from being a pure exploration company towards a project development and mining company,” Wrigley says. “We have the people at Village Main to take the group forward. These include Roy Pitchford who helped evolve what is now Impala’s Zimplats operation, Mike Scott who has discovered some exciting deposits over his career including the Marsfontein and Klipspringer diamond mines, and former Harmony CEO Bernard Swanepoel.”