Gabon – Plymouth Minerals has entered into a binding heads of agreement to acquire a 100% interest in two major potash projects located in Gabon through the purchase of Equatorial Potash.

Equatorial and its wholly owned subsidiary company, Gabon-based Mayumba Potasse SARL, holds 100% of two exploration permit applications in Gabon –  Banio and Mamana – covering an area of >1 400km2. The projects are located in the western quadrant of Gabon, hosted within the extensive sedimentary Congo Basin – a past producer of potash minerals.

In order to bolster the board of Plymouth with valuable African exploration, development and mining experience, the board of Plymouth will evolve through the addition of Equatorial shareholders Dr Eric Lilford (MD Elect) and Christian Cordier (Non-Executive Director Elect) subject to shareholder approval concurrently with the reduction of some members of the existing Plymouth board.

The acquisition comprises a 100% scrip based consideration with no cash payment, with a significant portion of the consideration aligned with performance milestones at the two projects.

Upon successful completion of due diligence and exercise of the option, the total consideration including all milestone payments would be 50 million shares in Plymouth. This consideration is through the issue of 25 million initial ordinary shares, which will be subject to a 12 month voluntary escrow period, and 25 million performance shares which vest upon completion of certain milestones.

Additionally, upon announcing a Pre-Feasibility Study which delivers a >25% internal rate of return for either of the Banio or Mamana projects, within a 4 year period after the acquisition, 10 million performance shares will vest.

In conjunction with entering into the acquisition agreement, Plymouth has also secured commitment for a placement of up to 8.3 million ordinary shares in the company, which will be issued at $0.04 per share to sophisticated investors, to raise approximately $332.066 before costs of issue.

The issue will be made at the last traded share price. 5.5 million shares will be placed under Plymouth’s 15% placement capacity.

The Company will also place a further 2.7 million shares under the additional 10% placement capacity approved at the company’s 2014 AGM.

Funds raised will be used to progress the proposed acquisition of the potash asset and for general working capital including the Morille tungsten project.

Firestone Diamonds 49% complete with construction of Liqhobong diamond mine 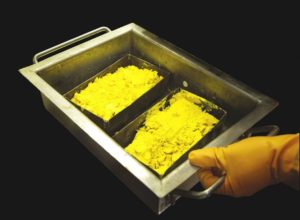