Potash in the Republic of Congo

The Kouilou potash project being undertaken by Toronto based MagIndustries Corporation in the Republic of Congo (Brazzaville) is expected to be the world’s first major new entrant into the potash industry for some time.

The Kouilou project, located 25 km by rail from the port city of Point Noire in the Republic of Congo, is based on proven and probable reserves of 33.5 million tonnes of potassium chloride. This reserve is sufficient to support 28 years of production starting at an annual rate of 600,000 tonnes of K60 potassium chloride (KCl) for the first two years and 1.2 million tonnes of K60 KCl a year for the remaining 26 years, as is planned by MagIndustries. If the company does not proceed with the second phase the life of mine is greater than 54 years, and there is another 209 million tonnes of inferred reserves. The project’s reserves lie within a 25 km2 portion of the 136 km2 Mengo exploitation permit which was granted in March 2008.

Fertilizers containing potash, which is described as potassium chloride and various mined and manufactured salts that contain the element potassium, are particularly desirable for the potassium depleted soils of India and China. Potash is also very desirable for marginally acidic soils such as those in Brazil, the main planned destination for the Kouilou product. Continued balanced fertilisation is critical for the efficient production of high energy content crops such as corn, sugar cane, palm oil, and soy. In general, the addition of potash improves the water retention characteristics of the soil, and the yield, nutrient value and disease resistance of food crops.

Recently potash has been selling at prices of US$700 to US$900/tonne but there is no centralised market. The market for this commodity is based on annualised contracts between supplier and off-taker, and these deals are typically country specific. The potash market is tightly controlled by what could be described as an oligopoly of dominant producers, and while over the past six months the demand for and prices of many other commodities have declined dramatically, the potash market has been upheld based on restriction of supply and product scarcity to market. 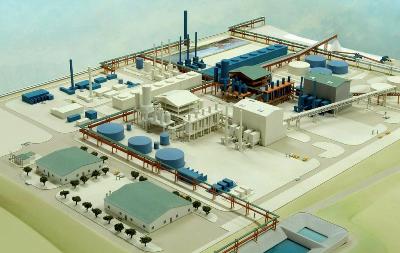 Canada, and in particular the province of Saskatchewan, account for about 50% of the world potash supply with former Soviet Union countries being the second largest contributor. One of the reasons CEO and president of MagIndustries William Burton says it is easier to develop a potash project in the Republic of Congo is that it avoids difficulties of trying to negotiate infrastructure arrangements in Saskatchewan where competitors are so heavily entrenched. In addition, the Kouilou project is located near a major port, while Canadian potash producers and those in the former Soviet Union are located over 2,500 km and 1,700 km respectively inland.

Pricing of potash is very dependent on the distance of the destination market from the producer, and here, MagIndustries has a distinct advantage. The Kouilou project is 3,556 nautical miles from its key intended market, Brazil, whereas product from competitors in Canada has to cover 9,505 nautical miles, that from Israel 6,234, that from Russia 6,259 and that from Belarus 5,874 nautical miles to reach this destination. The relative distances for reaching markets in South, North and West Africa are even more favourable for the Kouilou project. “In fact we will be the only major potash producer in the southern hemisphere,” Burton says.

MagIndustries already operates a forestry business in the Republic of Congo, and knows how to operate in the central African region. As a result of its forestry operation MagIndustries has control of the surface rights where the potash will be mined.

The company enjoys good relationships with the government, and its forestry division, a major employer with 400 full time workers and some 1,500 contractors, is also well regarded locally. At the moment the potash project employs some 50 full time people in the Congo, and has had up to some 200 drilling and engineering contractors on site.

It is also undertaking the rehabilitation of one of the eight Inga II turbines in neighbouring Democratic Republic of the Congo (DRC) and will market 50% of the 164 MW restored capacity. It has secured the rights to the 250 MW Busanga hydroelectric site, adjacent to the Katanga copperbelt, as potentially the DRC’s first independent power producer.

As it turns out Burton and MagIndustries did not come to the Congo looking for a potash project, but came to establish a magnesium project at Kouilou, with potash intended to be a by-product.

Magnesium is described as the first intelligent metal, as the Russians developed metallurgical applications where it could deform and then revert to its original remembered shape. This was developed as a metallurgical technology that could be used in a material to withstand the G-forces experienced by military warheads, and is a technology at the leading edge of the design of fighter aircraft.

With commercialisation of this technology MagIndustries was looking to source a magnesium deposit from which to supply the automotive industry. Burton looked for a deposit that could provide a stable source of supply to meet a long term contract.

The magnesium metal would be extracted by electrolysis after mining, with potash to be recovered as a by-product from the waste stream. However, in 2003 the markets for magnesium and potash started to go in opposite directions with magnesium prices declining and potash prices rising.

While potash is abundant and mineral deposits containing it, based as they are on dried ocean beds, are large, there are not many of them. The Kouilou deposit, which consists of stacked horizons of salt carnallite that range in thickness from 10 to 50 metres, will be extracted using solution mining. This typically has a lower capital cost than conventional underground mining. The deposit, which is some 500 to 800 metres at depth will be mined by a series of holes drilled into the deposit. Water from the nearby Loeme River will be heated to some 60OC and pumped down. Over two years the carnallite (salt brine) solution best described as a magnesium and potassium chloride will be extracted and crystallized and dried, using energy supplied from the abundant low cost natural gas available in the Congo as a result of oil production.

The solution mining and extraction process to be used at Kouilou has been around for the last 30 years and has been used commercially in Germany, Holland, Canada and the US. It is also preferable because salt beds also do not offer the easiest ground conditions for shaft sinking.

The principle of solution mining involves drilling largediameter boreholes to the bottom of the lowest carnallite layer. At Kouilou, Burton says, two drill machines in parallel will drill 25 pairs of wells to a depth of some 800 metres, these boreholes having a diameter of some 10 inches. One of the pair will be the injection well and the other the return well. Each well will last approximately three years. The 24-month contract for the drilling of the first 50 wells was signed late last year.

The brine solution enriched in magnesium and potassium chloride recovered from the dual well caverns will be processed at the potash plant. The spent caverns will be filled with the waste salt brine after recovery of the potash and, due to the large quantities of associated salt (NaCl), the waste returned to the caverns at Kouilou will be equivalent to sea water.

The solution mining process does not create surface waste dumps and therefore results in a sustainable mining operation with an extremely low environmental impact. Well heads and piping systems to the processing plant are the only surface infrastructure and at a site in Germany well heads are located within cultivated fields, and livestock pastures.

One of the largest cost components associated with the production of potash is energy, which typically accounts for 30% to 40% of the project’s running costs. This project has access to very cheap natural gas due to an abundance of flared natural gas in the Pointe-Noire area, and the lack of any existing markets in the region. The offshore oil industry in the Congo produces five million m3 of gas a day. The potash project will use 10% of this. MagIndustries signed a multi-year gas purchase agreement with Italian oil major ENI in March 2009.

The gas will be supplied from ENI’s M’boundi oil field via a treatment plant to be located at Djeno 25 km south-west of the Kouilou project. The gas supply will support all the requirements of the potash processing plant, as well as the project’s back-up power plant.

The project is well advanced, with MagIndustries already having spent some US$100 million on it. The feasibility study was completed in February 2008, the project team is in place and pre-construction and drilling activities on site have begun. Burton says full construction of the first phase 600,000 tonne per annum (tpa) potash plant should be under way by the end of 2009, with first production at the end of 2011, ramping up to full production during 2012. The construction cost is currently estimated by the company to be US$723 million and includes the infrastructure for the second phase modular expansion that will add another 600,000 tpa starting up in 2013. “The 600,000 tpa plant matches the optimum size of the equipment in the series crystallisation and compaction units,” Burton says.

The key contractors are in place, and MagIndustries is finalising the required US$840 million debt finance for the project. “Our preference is to get the majority funding as debt as we do not want to dilute ourselves unnecessarily.” The off-taker has already provided the project with US$70 million in June 2008, and is one of the largest shareholders in the project, with a 9.4% shareholding in MagIndustries.

SNC-Lavalin International did the feasibility study for the project, Greece based Consolidated Contractors Company will act as the general contractor for the construction, and HPD, a subsidiary of Veolia Water, will provide the design and key equipment for a brine concentration system and a multi-stage crystallisation system to produce potassium chloride.

HPD was awarded the Kouilou contract because of its extensive experience in potash installations, having been involved with the instillation of similar crystallisation equipment at the Dead Sea potash operations of Israel Chemicals.

Ameropa of Switzerland will take up 100% of the potash production from the Kouilou potash plant, and this agreement will support the project’s debt financing. Ameropa is a leading distributor of fertilisers and grains worldwide with an existing marketing infrastructure in Brazil.

South Africa’s E+PC Engineering & Projects Company Limited (E+PC), which is part of the Aveng Group that includes Grinaker-LTA, is the EPCM contractor for Kouilou. Included in the E+PC team is Added Value Engineering Consultants (Pty) Limited (AVEC) of South Africa which was previously the owner’s engineering representative during the bankable feasibility study.