Baobab Resources is about to complete the scoping phase of its Tete magnetiteilmenite project which could lead to a US$500 million operation producing 4.5 million tonnes a year of magnetite and ilmenite concentrate from 2014.

The Australian-based, AIM-listed, exploration company’s major asset is the Tete magnetiteilmenite project, immediately north of the provincial capital of Tete. It covers 632 km2 and contains two areas of mineralisation. These are the Singore area to the south and the Massamba group in the north. Baobab is concentrating on the eight kilometre long Massamba group trend, which is composed of a series of five prospects – Chitongue Grande, Pequeno, Caangua, Chimbala and South Zone – all of which have experienced little or no historical exploration.

“First of these is a resource base of 300 million tonnes, which we are very confident we will be able to define, as it is well within the range of our exploration targets,” he says.

“Second is a mass recovery of 30%, which we are also confident of achieving through the blending of ore domains, although there is more metallurgical test work required. And third is the commodity price. We based all of our work on a US$0.90 per iron unit, significantly less than the recently introduced quarterly pricing system which has marked a 90% increase in iron ore prices, with per iron units heading north of US$1.70. We have been very conservative on that score,” James states.

Drilling at the South Zone prospect
of the Massamba group trend

“We have also been conservative on the issue of power, which is a significant consideration in the processing of magnetite, and has a huge impact on the financial viability of the project. We have based our calculations more on what we would expect to pay in Australia for power production, rather than factoring in the fact that we are sitting right on the Zambezi River and the Cahora Bassa hydro scheme,” he points out.

“With all of these assumptions in mind, the financial modelling points towards a net project value (NPV) for the project in the order of US$340 million, with a payback period of less than eight years and a 30 year mine life,” James estimates. “If we were to revise the iron unit value to what we expect to be receiving in current market conditions, it has a significant impact on the NPV. In fact it more than doubles it. However, as we are still at a very early stage in the project’s development, these figures should be considered indicative of future value,” he says.

Baobab’s drilling programmes have resulted in an estimation of a 47.7 million tonne maiden inferred mineral resource. “A maiden inferred resource is the first resource estimate where there’s been no drilling previously, and it is by no means exhaustive,” James explains. “What’s more, we have tested only 500 m of an eight kilometre strike potential in the Massamba group area, and it is very much the first step in building our resource inventory.”

The study, done in accordance with the JORC code, also outlined a 400 to 700 million tonne exploration target for the greater Massamba group area.

Scout drilling traverses of the South Zone and Chimbala prospects of the Massamba group commenced in November 2009, prior to the onset of the wet season, and resumed again in March this year.

The purpose of the scout drilling campaign is twofold: to increase confidence in the 400 to 700 million tonne exploration target, and to identify ore domains for systematic metallurgical test work. “We need to go through this next phase before we are in a position to seriously accelerate the next round of resource drilling,” James continues. “The campaign is estimated to total 12,000 metres of combined diamond and reverse circulation drilling, and is expected to be completed during the third quarter of this year,” he adds.

The start of the Massamba pre-feasibility is on the cards for the fourth quarter of this year, and completion is scheduled for the end of next year’s second quarter. “This does, however, depend on exploration success in this next phase of drilling, as well as funding considerations,” he points out.

Depending on the outcome of the pre-feasibility, the plan is to start the bankable feasibility study at the beginning of the third quarter of 2011, continuing into 2012 “We’re in a pretty good position at the moment,” he says.

“We’re fully funded to complete the scout drilling campaign and comprehensive metallurgical test work and, depending on results, further resource drilling. We believe that this work will deliver results that will lead to a significant appreciation in the share price. So we anticipate that, come the end of the year, we will be in an enviable position of being able to choose between going back to the market to raise additional funds for feasibility studies, and bringing in a strategic partner, which is a nice place to be,” James says.

“On the subject of partners, we have a strategic partnership with the International Finance Corporation (IFC), which is our second largest shareholder with 7% of the expanded capital and it is a 15% participatory partner in the Tete project. We anticipate the IFC role becoming more important as the project develops, particularly in the facilitation of access to infrastructure, especially ports, rail and power.” 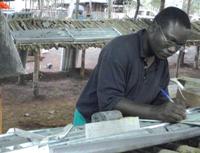 James adds that the IFC has been an excellent partner to date. “Working in Africa, the IFC is the best partner you could hope for in a largescale bulk commodity project. Through its affiliation with the World Bank, it is involved in the refurbishment of the port of Nacala, and the railway which will be linking Nacala with the interior.”

“We certainly have had a lot of interest out of Asia and the Middle East, and we’ve got what could be great joint venture partners already operational in Mozambique,” he reveals.

The final decision to mine will only be made in 2012 after completion of the bankable feasibility study. “If it is positive, one could expect a build-up of around two years, so one would be looking at producing and railing out the first concentrate in 2014, but this really is a very rough estimate at this early stage.”

As far as production is concerned, Baobab Resources is modelling on an overall 10 million tonnes per annum throughput. “Based on desktop modelling by Coffey Mining, this would generate two to three million tonnes per annum (mtpa) of ferro vanadium (or magnetite) concentrate grading about 68% iron and 0.8% vanadium pentoxide; and 1.0 to 1.5 mtpa of ilmenite concentrate grading some 50% titanium dioxide with an iron credit of about 10%. The throughput of 10 mtpa will deliver a combined product of up to 4.5 mtpa,” he explains.

As far as the future is concerned, Baobab will be reevaluating these numbers regularly, and at a later stage will consider the need for additional resources and the possibility of ramping up production when the time is right.

The company has not calculated accurate figures at this early stage, but, says James, “looking at industry standards, for setting up such an operation, which will include a milling circuit followed by magnetic separation circuits, as well as railways to link the project with the railhead at Moatize, and a significant amount of funding to set up a port facility, we would be looking at a capital expenditure of around US$500 million.”

Looking further ahead, Baobab is commissioning additional desktop studies to examine further downstream development possibilities. “What we have yet to determine is how we may add additional value on-site through our unique access to the abundant hydro-electric power and coking coal on our doorstep,” James explains. “Bearing in mind that this is still very much an early stage project, we have commissioned a desktop study to determine the financial parameters, key sensitivities for mine-mouth pelletising, roasting and smelting scenarios.”

Drill team at work at the
Chitongue Grande deposit

Upgrading the concentrate further on site could involve smelting to create a pig iron and vanadium slag; roasting of the ilmenite concentrate to create a synthetic rutile, or even a ferro-titanium alloy product.

“We are in a unique position in Africa, if not globally, in that our project is strategically located to access all of the required infrastructure and complementary resources which are available in the area,” he adds.

The Tete project is well placed to access low tariff hydroelectric power from existing and developing schemes on the Zambezi River; the ports of Beira and Nacala are being refurbished, as are the rail corridors through to the Tete area, providing strategic access to Africa’s eastern seaboard.

“We also have the luxury of following behind the mining majors of Vale and the Riversdale/Tata Steel joint venture in their development of the Benga and Moatize coalfields,” James points out. “We are slotting in behind them as they push ahead the refurbishment and expansion of the Mozambican infrastructure, including the development of a coal-fired power industry in Tete, which is emerging as a mining and industrial hub of southern Africa,” he concludes.