This independent survey – carried out by consulting engineers Consultburo on behalf of Rand Water, one of South Africa’s largest bulk water providers – showed a 66% saving in water consumption after the installation of the Bambamanizi prepayment water management system.

The project, comprising 47 prepayment community standpipe meters, was evaluated over a period of three months before the installation of the meters and three months afterwards. Comparisons over the two periods showed that the community’s water consumption dropped by an average of some 550kl per month.

The survey report noted that "the average demand from January to April was 8350kl per month and that between May and July this dropped to 2850kl per month, representing a reduction of 66%”. This significant drop in consumption was attributed to "less wastage of water and greater control as a result of the installation of the Bambamanzi Prepayment Meters".

And taking into account historical outstanding debts at the time, the cost of installing the system was recovered within just four months.

Based on ‘smart technology’, the Bambamanzi prepayment water management system underpins the South African government’s reconstruction and development programme by ensuring that water consumption and services are paid for in advance. It also contributes to water conservation by encouraging consumers to use water more sparingly, while at the same time giving bulk providers and local authorities tighter management control, which results in administrative cost savings.

Within a year of launching its prepayment water meters on the market, Bambamanzi is involved in the supply of water to over 500 000 consumers in South Africa. The company has also had strong export enquiries from as far afield as Mexico, South America, Indonesia, Europe and countries throughout Africa. A pilot project was launched in Uganda last year.

"There tends to be a perception that prepayment water metering has been developed for third world countries, where there are low service levels and a culture of non-payment," says Bamamanzi managing director Neil Rodseth.

"This is not true. In Singapore, for example, the government is actively pursing prepayment technology because the consumer demands a more cost-effective service with streamlined administration costs. In this scenario Bambamanzi fits the bill perfectly. It totally eliminates unpaid accounts, service interruptions and reconnection fees. It works as well in Singapore as it does in Africa." 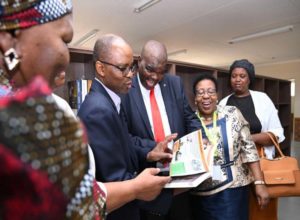