Mineral Deposits Limited (MDL) – an Australian-based resource company listed on the Australian and Toronto stock exchanges – is producing its first gold in Senegal, and believes there is scope for significant future expansion.

The company’s Sabodala project – which is located 650 km east of the capital, Dakar – is part of the renowned West African Birimian gold belt, which is emerging as one of the most exciting gold belts in the world today.

The pit works at Sabodala

“We are on the part of that belt that extends into Senegal,” MDL executive chairman Nic Limb explained, “It has already yielded new discoveries of nearly 10 Moz in four years, and this is just the beginning. I believe the industry expects it to grow to many times this size – so it is in the early stages of international significance,” he added.

MDL controls 1 700 sq km of land in the district and has a current resource of 3.5 Moz. “The other major player in the area is Randgold, whose Massawa deposit is currently at 3.5 Moz, said Limb. “In addition, a joint venture between Canadian-based Oromin Exploration and some Middle Eastern investors in the immediate proximity of our mill has a current resource of another 2.3 Moz. Clearly, this newly emerging belt – which is already at 10 Moz – gives strong indications of becoming one of the major gold belts in Africa,” he contended.

Currently MDL has the only gold mine and mill already in operation in the area. “We spent a total of around US$250 million (R2 billion) on developing our Sabodala mine and mill,” Limb revealed. “The processing plant commenced commissioning in mid-March and ramped up production throughout the June quarter to a rate of 2.3Mtpa – well above nameplate capacity of 2Mtpa,” he said.

“By the way, we went from first drill hole to first gold bar in 3.5 years, which we believe is one of the best achievements in the gold industry anywhere in the world in recent times,” he added.

FUTURE EXPANSION NO PROBLEM
“I must emphasise that with future expansion in mind, we built a 2 Mt mill which is rapidly expandable to 4Mt at an estimated cost of only an extra US$40 million (R320 million). For instance, our current operation needs 14 MW to run, but our power station is a 30 MW installation, and our crusher is a 5 Mt installation. This was all done deliberately to give us a future strategic advantage in the district,” Limb explained. 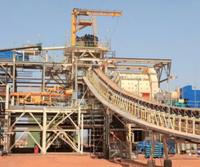 Sabodala will produce 160 000 oz in nine months by the end of December this year at a cash cost of around US$350/oz. “From next year we will hold production at 150 000 oz pa as an average annual production over life of mine, which is currently estimated at 10 years,” he added.

Saboldala’s current resource is 3.5 Moz. “The current reserve is 1.6 Moz, although quite a bit of the gold in the resource has not yet been brought into the reserve category – there’s a lot of work to be done on underground and other extensions to the ore body yet,” according to Limb.

“We have just released production details for the first full quarter’s to 30 June, and it amounted to just under 59 000 oz at a cash cost of USD$350.oz,” he stated.

“To date we have been very pre-occupied with building the mine and getting it running,” said Limb. “As a result, near-mine exploration is at an early stage, but we have expectations that within a few kilometres of the mill there are a number of rather large opportunities to be drilled out,” he said.

RENEWED FOCUS ON EXPLORATION
“With the project now built and brought to production, exploration drilling both within the mining lease and regional areas – which had largely been suspended during the past 18 months – will be ramped up. We will definitely be focusing more on the exploration side, in fact the rigs are out there again this quarter, and we have already started,” Limb revealed.

“It is extremely likely that this exploration will lead to an increase in reserves – not only in the near-mine area, but also within a 50 km radius, where we have 1 700 sq km of exploration ground with an enormous number of targets,” he added. 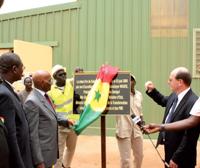 President Abdoulaye Wade of
Senegal official opening the mine

“We will be spending about US$8 million (R64 million) a year on regional exploration, and near-mine exploration will need even more than that because you have to drill at high density,” Limb explained.

“We don’t need to run off and do anything else in another region for the time being. We need to focus on the opportunity in front of us. Clearly we’ve got the controlling position in one of the major new gold belts emerging in the world, and our focus is to make sure that we control that opportunity,” he insisted. “The challenge while we are doing that is to survive the larger companies which are currently all circling,” Limb pointed out.

“The ground next to us is controlled by Oromin and the Middle Eastern investors, with a current resource of 2.3 Moz, and that’s within 5 km of our mill. Then Randgold’s Massawa deposit, which is currently sitting at some 3.5 Moz, is approximately 25 km away,” he said. “Added to that, Iamgold has purchased 17% of Oromin; across the border you have Iamgold and AngloGold at Sadiola to the north of Loulo; and then Randgold itself at Loulo.

So it’s a very interesting and somewhat overcrowded belt at this stage,” Limb noted. “I firmly believe that there is more happening on the gold scene in West Africa than anywhere else in the world,” he concluded.