In the midst of a two year period in which global zinc production is expected to decline by up to four million tonnes per annum (mtpa), a South African company is poised to redevelop and launch a R1.2 billion zinc project.

CEO Kevin van Wouw at the
Pering mine waste dumps

Incorporated in 2007 and based in Johannesburg, Minero Mining Company, the company behind the project, is a 52% black-owned holding company with a 76.1% interest in Minéro Zinc. The other shareholders are Metmar Limited (19.91%), DRA Mineral Projects (0.44%) and Umbono Capital Partners (3.55%).

Revealing details of the new project in an interview with Mining Review Africa, Minero Zinc CEO Kevin van Wouw says that with current metal prices declining in the global economic downturn on the one hand, and with Southern African zinc demand expected to rise more than 25% by next year to 150,000 tpa, his company regards its new zinc project as an ideal opportunity.

“Cuts in international zinc production through mines having shut down, been placed on care and maintenance, or having reduced production, resulted in a loss of 1.2 million tonnes of zinc in 2008 alone. And we anticipate that an additional three million tonnes of supply could be removed this year if current market conditions continue,” he adds.

“Meanwhile in South Africa, the Department of Trade and Industry (DTI) says the country consumes 110,000 to 120,000 tpa of zinc. Of this, producers are providing South Africa’s only zinc refinery, Zincor, with 90,000 tpa from Southern African sources. The balance is imported from mines such as Lennard Shelf in Australia and Lisheen in Ireland, both of which have now been put on care and maintenance,” he says. 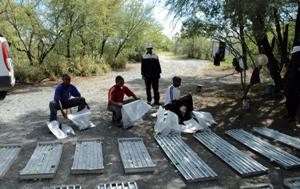 The core yard at Minero’s zinc operation
during drilling operations.

“It is within this framework, also taking into account the rapidly rising South African demand because of its growing infrastructure spend, that Minero has identified an opportunity to introduce new, low-cost domestic zinc supply to plug the supply gap between the current 90,000 tpa and the future 150,000 tpa. As an import replacement project, and in view of the forecast increase in SADC consumption, we certainly think there is a lot of sense in what we are proposing to do.”

Minero’s zinc opportunity is centred on the Pering mine, situated about 70 kilometres south-west of Vryburg in the North West province, which was shut down by BHP Billiton in 2002.

Minero Zinc has exercised the option to purchase the issued shares in Pering Mine (Pty) Limited, which holds the rights to the Pering Mine, from Pering Mine Services Holdings (Pty) Limited, a subsidiary of BHP Billiton. It is in the process of completing the transaction.

“During the option period we conducted a feasibility study of the orebody, using previous exploratory drill hole records in conjunction with our own twin drilling programme to verify the previous records,” van Wouw says. “We are satisfied that the orebody can be mined economically.”

Van Wouw says that the modelling of the orebody – a resource of 448 million tonnes at 0.37% zinc and 0.1% lead in measured, indicated and inferred categories – was shown with 80% comprising the measured and indicated categories. At the current zinc price of US$0.6 a pound, the proven and probable mining reserve is 42.6 million tonnes at a grade of 1.21% zinc and 0.31% lead.

Projecting the zinc price to US$1.0 per pound, the mineable reserve would increase dramatically as defined resources are unlocked. “Considering that zinc is a heavily infrastructure-linked commodity worldwide, it is not unreasonable to expect a price of US$1.00 per pound in the near future,” van Wouw says.

View from the top of the main pit at Pering.

During the period that the orebody feasibility study was conducted a parallel study was implemented to evaluate the size and cost of process plant required. DRA Mineral Projects was briefed to design and cost a treatment plant that could process 5.04 mtpa of run-of-mine ore. This was later modified to the extent that the treatment rate should be developed in two phases; namely an initial treatment rate of 1.86 mtpa; and extension of the facility after three years to treat 5.04 mtpa. “The Phase 1 interim plant will commence operations processing the existing rock dumps,” van Wouw says, “and once the pits are dewatered and the mining commences, the 5.04 mtpa plant would come into operation.”

Van Wouw says that Metmar Limited, a company which focuses on commodity trading, finance and logistics facilitation, has subscribed for 20% of Minero Zinc. This came to R80 million, which is the basis of its funding so far, together with R20 million injected by the founders.

“I am confident we can raise sufficient funds for our requirements within the next year, although completion of the equity portion of the funding might take a little longer. I am certainly not going to be raising any debt within this year,” he says.

“As far as the further funding is concerned, we are now working very earnestly in identifying people who want exposure to an infrastructure metal like zinc,” van Wouw adds. “We are also exploring the development funding route, and have approached the Development Bank of Southern Africa, the IFC and the IDC. They have all expressed interest in the project and their willingness to get involved, but one must realise that development funds will never exclusively fund a project.

“Funding required for the first phase of the project to treat 1.86 mtpa has been estimated at R800 million,” he says.

“The interim plant capital is budgeted at R610 million, and the balance is required to cover the cost of establishing mine infrastructure; earthmoving; workshops; tailings and slimes dam facilities; and to provide suitable access roads and start-up capital, of which R50 million has been spent,” he adds.

“We are very fortunate in that we have reached the stage in our project where we can actually develop it so that it commissions at the point when the markets have recovered,” he points out. The plan is that the process plant would be commissioned in early 2012 to produce 28,000 tpa and 4,000 tpa of lead by the middle of the second quarter of that year.

Drilling rig at work at the mine site as part of the Minero bankable feasibility study.

This gives Minero three years, which is quite a slow development process for the project. “In essence, we have put together a plan which takes our design slowly to ensure that we get it right, and only accelerates the construction spend when the board is comfortable that the forecasts out there for metal products are more believable,” van Wouw explains.

As far as actual mine planning and redevelopment is concerned, Minero has already started with design. “If our current projections prove to be correct, we would release the project for construction before the end of the second quarter of 2009, and we would allow at least 22 to 24 months to complete construction. Towards the end of 2011, if the zinc price has proved satisfactory by that time, we would then move into commissioning and actual production in early 2012.”

Van Wouw goes on to say that Pering would produce at an average of these levels of zinc and lead metal over the current projected life of mine of 13 years, but he emphasises that if the zinc price did reach the US$1 level, life-of-mine would shoot up to 34 years. “And quite frankly we expect to achieve the latter, rather than the former.

“Our total project to mine 5.04 mtpa, close to three times the capacity of the first module, will involve an additional R400 million, escalating the overall capital expenditure for the project to R1.2 billion,” van Wouw says.

“In view of the present forecasts, construction of the Phase 2 module and the upgrading of the interim plant to a throughput of 5.04 mtpa is expected to take place in late 2013, with the additional production commencing in late 2014 or in early in 2015. At the 5.04 mtpa throughput level production will be variable between 35,000 and 70,000 tpa of zinc.”

A second opportunity for Pering mine comes in the form of its historic waste dumps, which are fortunately classified as being of medium to high grade in terms of Minero’s business plan.

“We are proposing to process them as already mined ores in the interim period while the massive dewatering task of eight million cubes is undertaken, and we can then commission the second module at the same time as we commence the mining of the pits,” van Wouw explains.

The mine offers a third opportunity in the form of the existing slimes dam, which contains 20 million tonnes of historic slimes. “This is to be sampled, and should it be viable to construct a retreatment facility it would be an opportunity to rehabilitate an environmental liability. This is more a longer term, end-of-life project than one which we would tackle now,” he says.

“I think the key factor on which we should focus is our estimated life-of-mine average cost per pound of US 0.43 cents – that puts us firmly in the lowest quartile of producers,” van Wouw says. “It means this project would have the robustness to survive another event of the magnitude of the current economic meltdown, which gives us a lot confidence going forward.

“At this time Pering is the only zinc project in which Minero is involved, although we are contemplating two other projects We are looking for opencast opportunities rather than deep level mines, and our main interest is in the base metal sector – zinc, lead, copper, nickel,” van Wouw says.

“We are comfortable prospecting for opportunities in anglophone Africa, and the English-speaking world as well, from the point of view of our team’s familiarity with Canadian, American and Australasian prospects,” van Wouw explains.

“As an anchor project for Minero, the Pering mine represents an opportunity to establish a zinc processing foothold in Southern Africa from which to develop the strategy of an integrated zinc company. Southern Africa is highly prospective for zinc and lead mineralisation, and Minero’s strategy to consolidate existing operations and processing facilities to grow the company into a primary zinc producer could have significant merit. Let’s put it this way – no-one else is talking zinc,” he concludes.