Red Back Mining taking off production to more than double

Red Back Mining Incorporated – a Canadian-based and TSX-listed resource company focusing on West Africa – believes it is in the ideal position to develop into a leading African gold producer.

This is the opinion of the company’s vice-president: corporate development Simon Jackson, who told Mining Review Africa that Red Back was currently enjoying an exciting combination of positive circumstances.

“We have two projects in production and with more than ten years to go; we’re going to be producing over half-a-million ounces a year at below the average cash operating cost; we have exciting expansion opportunities at both projects; we have no debt; we are not hedged; we have US$150 million (R1.2 billion) in the bank; and our cash flow is going to be in the region of a quarter of a billion dollars a year at a gold price of US$900/oz. We are really in a great position,” he exclaimed.

Red Back’s two key projects are the Chirano gold mine in Ghana and the Tasiast gold mine in Mauritania. Together they will produce 550 000 oz of gold next year – over 40% above this year’s forecast of 390 000 oz and more than double combined 2008 production of 260 000 oz. Furthermore, future production is expected to rise even further through exploitation of its extensive exploration portfolio in both countries.

The Chirano gold mine and the mining lease on which it is based are owned 100% by CGML, itself 100%-owned by Red Back through its intermediate subsidiary, Red Back Mining (Ghana) Limited. The mine is situated in south-western Ghana, 100 km south-west of Kumasi, which is Ghana’s second largest city.

The new ball mill at Chirano

“Two developments have led to this growth,” he explained. “First of these was the US$59 million (R472 million) expansion of the Chirano plant, which is increasing plant throughput significantly from 2.3 to 3.5 Mtpa,” he added.

“The first stage involved a significant increase in the crushing capacity at the front end of the plant to deal with the hardness of the ore,” Jackson explained. “That was commissioned in March, and led to immediate growth in throughput, and therefore production. The second part of the equation is the new ball mill and tanks which are scheduled for full commissioning in September,” he continued.

Total reserve at Chirano is about 2.3 Moz, the total resource is just under 4 Moz, and both of these numbers are expected to rise

The second development is an underground operation at Akwaaba Deeps – one of the 11 Chirano pits.

“As far as the Akwaaba Deeps underground project is concerned, we have actually started commercial production there, albeit on a very small scale,” Jackson revealed. “Initial throughput will ramp up to around 50 000 tpm, and once we get into full production we will be processing 100 000 tpm from the underground operation, as opposed to about 200 000 tpm from the open pits,” he added. “This total of 300 000 tpm gives our annual throughput of 3.5Mtpa, which will yield annual production of 250 000 oz.”

Based on the existing mine plan, 250 000 oz pa will be the average annual production figure through the life of mine, which – based on current reserve figures – will be 9 to 10 years. 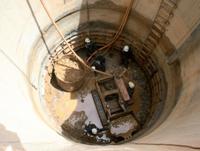 HUGE EXPANSION POSSIBILITIES AT AKWAABA
The reserve at Akwaaba at this time is just over 1 Moz. “We are going to produce roughly 120 000 oz pa from Akwaaba, which gives us a life of mine of seven to eight years based on the current 1Moz reserve,” Jackson continued.

“It’s important to realise that this deposit is also open,” he said. “We have only drilled to around 450m below surface. Once we get the decline down to the end, we will be setting up exploration stations underground and continuing to drill deeper,” he pointed out. “We believe this will not be the end of the story for Akwaaba Deeps, and we are hoping it will continue at depth. In other words, that it proves to be a beginning rather than an end,” Jackson suggested.

Other pointers combine to suggest strongly that the Chirano project could be huge. “The existing mining lease area where Chirano and Akwaaba are situated is about 10 km long north-south, and as you know we have identified 11 pits there, and we are establishing an underground mine under one of those deposits,” he reiterated.

“We have found high grade material and increasing widths below all of the deposits, and at the Paboase South pit we have discovered a significant high grade extension,” Jackson revealed. “This could mean two underground deposits out of 11 pits, with strong future possibilities at the other nine,” he continued.

“Historically in Ghana – certainly in the last 25 years – most gold deposits have ended up being around the 5 Moz mark, and we certainly don’t see any reason why we should not believe that Chirano is going to be at least that,” he predicted. 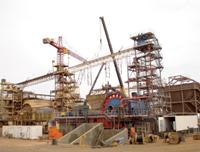 TASIAST AN EVEN MORE EXCITING PROSPECT
Turning to the Tasiast mine in Mauritania, a significant expansion programme has just been completed, and production is expected to ramp up significantly through the year. “We expect to get to our 230 000 oz target this year, and we believe that next year in full production Tasiast is going to achieve an output of 300 000 oz,” Jackson estimated.

As much as Chirano is an exciting project and has plenty of exploration upside, Red Back believes that Tasiast is even more exciting.

“In just short of two years we have taken the Tasiast reserve from 1Moz to 2.3 Moz, we have produced a couple of hundred-thousand ounces, we have expanded the plant from a throughput of 1 to 2.5 Mtpa at a cost of US$45 million (R360 million), and we are now in the final stages of commissioning prior to raising production to 300 000 oz pa,” he revealed.

This is a project that has enormous legs. “To put it into context, having identified the parallel structures that host the mineralisation here over a length of about 80 km – all of which is on our mining lease – the current reserve of 2.3 Moz comes from within a 6 km area – so we’ve got about 74 km to go,” Jackson intimated. “This is a beauty – it really is a very exciting opportunity and could prove to be a 10 Moz project,” he insisted.

“Life of mine at the moment is estimated at 8 to 10 years, but we are adding ounces to the reserve very quickly,” he pointed out.

“One must bear in mind that not all of the production is going to come from the plant – we do have the dumps as well. The fact is that the expansions will give us the ability to produce about 300 000 oz pa from the plant and dumps at Tasiast – around 50 000 oz from the dumps and about 250 000 from the plant,” Jackson calculated.

MASSIVE MINERALISED CAMP UNCOVERED
But there’s more to come. Jackson went on to elaborate on a recent new discovery at Tasiast which is only 3 km from the plant, and could prove to be highly significant. “The traditional view on this project was that the mineralisation was hosted by a couple of parallel iron formations, which are what we are mining at the moment,” he explained. “The area between the two was previously thought to be barren, but we have discovered significant higher grade mineralisation there, so it is now looking as though these pits are going to be potentially joining the two formations together, and could be up to a kilometre wide. This has certainly changed the way we look at Tasiast,” he said.

“Our problem at Tasiast is not finding gold, it’s what to do with the low-grade material we find in addition to the highgrade. What a great problem to have,” Jackson exclaimed.

“We built this company through acquisition, and I believe that we have demonstrated to the market that we are happy to move outside West Africa,” he added. “Realistically, there are not a lot of gold projects in the world – let alone in Africa – that fit our criteria. We will continue to assess opportunities, and if an opportunity exists to do another accretive deal, we will do it,” Jackson declared.

“Equally, though, we don’t have to do any more deals – we have plenty of exploration upside on our own two properties, and we’re in a nice position where we are not forced into new ventures. So we will just continue to assess possibilities as we always have,” he concluded.