The Mining Qualifications Authority (MQA), the statutory body responsible for qualifications and standards in the South African mining industry, has been developing a new training strategy to meet and beat the two major challenges the industry faces – higher health and safety levels, and improved skills development.

“We participated in the implementation process of, and have been busy with, the Presidential Audit Report, ordered in October 2007 by then-president Thabo Mbeki,” the MQA’s CEO Livhu Nengovhela tells Mining Review Africa.

“The report clearly underlined the unsatisfactory level of safety in South African mines, and the MQA has been given the task of conducting an initial investigation into the establishment of government regional training centres (to be known as skills development institutes) as a possible solution,” he says. “It has been made possible by the recent amendment of the Skills Development Act which allows government to establish institutes for training. This is especially important with the challenge of artisan shortages in the country. Government can no longer rely on the private sector to meet the training needs of the economy.

Mineworkers in training
for surface mining

“It is clear that safety and skills development go hand in hand,” Nengovhela says. “Most research conducted by the Mine Safety Council shows that the more skilful the employees the higher the level of safety you encounter in terms of their particular job culture. If you want safety, people have to know precisely what they are doing and why they are doing it.

“Drawing from the presidential audit report, one blind spot we had at the MQA was to be structured to service the big corporations, such as Anglo American, Kumba, BHP Billiton, De Beers, Xstrata, and so on. The majority of them are not necessarily growing; in fact some of them are even declining,” Nengovhela continues. “We are satisfied that we have almost reached a maintenance mode in support of the big companies.

“Today growth lies in the medium-sized companies and these are the ones which don’t usually have the funds to establish their own training centres. The establishment of skills development institutes would mean that all the training in the different provinces would not have to be done by the smaller companies that cannot afford it. Employers can send their people to the proposed institute for theoretical and practical training. The employees would then do on-the-job training in their normal working environment in their mines. The employer would have none of the many responsibilities, nor the expense, of establishing its own training centre.”

The idea would be to establish such centres in the main mining development areas such as Limpopo, the Witbank area, North West, and have other centres further afield. “Here one finds a lot of medium-sized operators that don’t have their own training centres, because to be accredited as a training provider in the mining industry has been too lengthy and costly a process,” Nengovhela points out. “In the past your major training centres for technical skills were at major companies like Sasol, Eskom and Iscor. In fact, most artisans on mines came out of these training centres.”

The MQA is established as the institution responsible for qualifications and standards for the mining industry, in terms of the Mine, Health and Safety Act and the Skills Development Act.

“Our income comes from the Skills Development Levy Act, which makes it compulsory for all employers, except those with a total company wage bill that is less than R500,000 a year, in the mining and minerals sector to pay skills and development levies. These levies are collected by the South African Revenue Service, sent to the Department of Labour, and then allocated to the different Sector Educational Training Authorities (Setas). We are one of 23 Setas that cover the different industrial and financial sectors in the country,” Nengovhela says.

The level and amount of levies that go to a Seta depend on the size of the industry, and the size and number of companies in the sector. The mining sector tends to be very volatile when it comes to employment trends, and therefore income can vary sharply.

“I think that the global financial crisis which sent commodity prices tumbling is going to affect our income in the immediate future,” Nengovhela suggests. “While our budget has been growing at about 10% per annum in recent years, we are predicting no growth in the 2009/2010 financial year, which will be very similar to our current budget of R440 million. And we actually expect a decline for 2010/2011.

“As you can see, this current model is totally different from the new proposal to also give the responsibility of training and the running regional training centres to the government.

If the skilled development institutes are established in the future, it would not be done by the MQA; they will be under the custody of the Department of Minerals and Energy (DME) or an agency of the DME. The MQA will be directly involved in terms of support through the accreditation process, which might be delegated to it by the soon to be established Quality Council for Trades and Occupations (QCTO). “We will perform the accreditation functions for the institutes on behalf of the (QCTO), and will provide industry with grants for employees and unemployed learners to attend,” Nengovhela confirms.

“I think this could lead to a lot of improvements to the Seta system and training in general in the country,” he says.

“We would also have to decide upon which areas would be suitable, and exactly what training would be covered by each institute. We will have to do the necessary research, develop the necessary understanding of the various areas, and obtain the support of the mining companies. 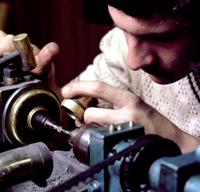 Another aspect of training – diamond
evaluation and processing.

“As far as finances are concerned, government should be able to pay the establishment costs for the new centres. The MQA would still continue to facilitate a number of issues, and the new regional centres would be treated like any other training centre in terms of accreditation. The current amendments to the Skills Development Act allow for such funding to be provided by the government. Government will decide on how much funding will be allocated to each reinstitute, but the centres themselves will need to be proactive and generate other income as well,” he adds.

The time-frame is relatively fast. The MQA intended to submit its report to the MQA board and the Mineral and Petroleum Resource Development Board, which advises the minister, by July this year, which means that the new strategy could start being put into operation by the beginning of the 2010/2011 financial year in April 2010,” he says.

“We are happy with the more than 5,000 workers being offered training at present but this does not alter the fact that, in the light of the size of the industry, we need to train more.

“Last year the MQA budget for learnerships and apprenticeships was R70 million, and about R60 million was disbursed in the form of grants, and industry could not exhaust these funds by taking up all the available opportunities,” Nengovhela says. “So no-one could say I could not train because I could not get a grant. There should not be a single employer who could not get a grant to train its employees,” he insists.

“The mining industry might be going through a tough time, but it’s not going to last, and then everyone will want to know where the trained workers are. Our proposed strategy of skills institutes can provide the answer to greater skills development and improved mine safety.”