Gold in rock at Konongo

Australian based minerals exploration company Signature Metals has announced a JORC resource for the old Konongo tailings dam, contained within the Konongo gold project in Ghana’s Ashanti gold belt. The resource is 1.75 million tonnes at a grade of 1.09 g/t gold for some 61,150 ounces of contained gold.

The old Konongo tailings dam contains residual material from processing at the historic Konongo mine, which operated between 1918 and 1986. Records show that some 2.8 million tonnes of ore was processed at a head grade of 15.7 g/t and some 1.4 million ounces of gold was recovered.

The old Konongo tailings dam is one of a number of surface stockpiles/ dumps that Signature is evaluating to determine if it can provide feed for the existing 350,000 tonne a year CIL plant. The cost of reclaiming these stockpiles will be less than that of mining new ore making them potentially viable sources of mill feed. 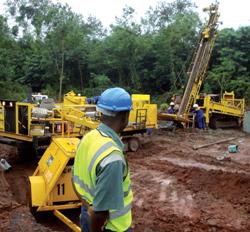 The option of blending tailings material with oxide ore is also being assessed as part of the optimisation of the mining schedule. The high grade portion of the old Konongo tailings dam resource could provide sufficient material to run the CIL plant for the first year of operation.

Preliminary metallurgical test work indicates that recoveries of over 60% are achievable from this material, with recoveries as high as 80% being achieved.

Signature Metals is entering an important phase in the development of the Konongo gold project with the mining study and plant assessment nearing completion. Its aim is to develop Konongo into a more than 100,000 ounce a year gold producer. The exploration target is for 1.5 to 2.5 million ounces of gold contained in about 20 to 25 million tonnes at a resource grade of 2.0 to 4.0 g/t.

The company reports that exploration programmes are progressing well, with high grade results received from drilling. And with the onsite CIL plant available and serviceable at a fraction of the cost of purchasing a new/ second hand plant the lead time for the project is envisaged to be six to 12 months.

The Konongo gold project comprises 192 km2 of granted tenure and contains 16 known gold deposits along 12 kilometres of strike of the Ashanti gold belt.