Inspection or auditing of dangerous or inaccessible areas is a necessity for operators but is time consuming and highly dangerous for the teams of people required to do it. There is now a solution which largely eliminates reliance on teams of personnel, rigging and scaffolding and the dangers involved, plus it cuts down much of the time it previously took for inspections of large scale plant and equipment. 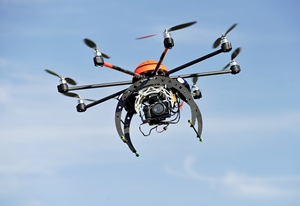 The solution is a remote controlled drone which will fly to the top of an exhaust stack or to the unseen areas of any large plant and machinery, take a series of HD pictures, zooming in to critical areas and sending them back for analysis.

“Heavy industrial and mining environments, for instance, are harsh on both the service personnel and equipment, plus the downtime associated with work can be a very expensive exercise,” says MD of Soto Group, Frank Soto. Safety of the people involved is always at some sort of risk as inspection procedures normally involve an element of physical danger.

The drone solution through Soto/Coptercam involves very few people and can achieve in a single day what traditional means would in a week.

For example, where a team of professionals would be assembled with harnesses, scaffolding and other structures, a Coptercam craft is simply flown into the affected areas with a specially mounted camera capable of high resolution photo stills and video or thermal imaging.

The drone is operated remotely at a safe base on the ground by a fully certified Coptercam pilot alongside a Soto engineer viewing a HD monitor in real time during the inspection exercise.

In the hands of an accredited expert, a drone can be mounted with a camera of choice (24MP with real-time zoom function or 36MP fixed), positioned to hover in the air at any chosen viewing point, take as many photographs as required which are then analysed by Soto engineers back at the office.

The team can easily work out what sort of remediation is required without sending a single human being into the danger zone. Importantly, in real-time via the HD live camera feed to the ground, the attending SOTO engineer can direct Coptercam to focus on a specific area of interest as a hazard is identified