One of the secrets to a thriving alluvial diamond business is moving high volume tonnages – consistently – and Rockwell Diamonds is proving this is true. The company has breathed new life into its Middle Orange River mines over the 2014 year thanks to the implementation of an ingenious idea which has seen it replace and revive its entire earthmoving fleet, more cost effectively than originally thought possible, writes Laura Cornish.

Alluvial mining is no easy task, and arguably requires more persistence, determination and passion than any other commodity. Fortunately Rockwell Diamonds’ CEO James Campbell and management team have these qualities in abundance. And the results are clear to anyone who understands the alluvial diamond business. The company, which not that long ago was barely mining sufficient volumes to warrant its existence, has drastically transformed itself.

It has been three and a half years since Campbell took up the CEO position. “Rockwell Diamonds is mining and processing greater volumes than ever before (15 Mtpa pro rata) and has declared nine successive quarters of revenue growth,” says Campbell.

But Rockwell Diamonds’ success has not come easily. “We have built two new mines (Saxendrift Hill Complex (SHC) and Niewejaarskraal) from working capital and preused equipment while contending with the financial market’s unchanging negative perception about alluvial mining, in the Middle Orange River in particular.” Despite this, building onto and adding to its list of improvements and achievements has become the ‘norm’ for this company, which in 2014 includes one of its greatest successes to date.

“Replacing the entire historic mining fleet, at Saxendrift and SHC, is undoubtedly one of our most exciting accomplishments,” says Campbell, who admits that the operations were unsustainable if left unchanged.

“The required maintenance costs of our old fleet were escalating incredibly and their operational performance and reliability was becoming unpredictable. The entire fleet required second hand life replacements – an astronomical cost for a lean-and-mean run company. In essence, fixing our old fleet was not an option and the cost of a new fleet too expensive to consider.”

EARTHMOVING TRANSFORMATION
When Walter Hill, CEO of earthmoving lease company Eqstra, sat down in Rockwell Diamonds’ boardroom, a transformational solution was born. “Walter suggested a lease agreement entailing the replacement of our kit with an entire Eqstra second hand fleet (much of which had low hours on the clock), which was extremely cost effective but would not compromise on equipment availability or performance,” Campbell reveals. 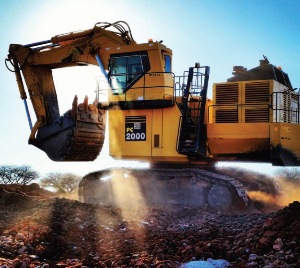 It was the answer Rockwell was looking for and saw it soon after sign a large lease deal with Eqstra for an entire new second hand earthmoving fleet including six Terex 100 t trucks and large front end loaders which today are performing and delivering the required monthly tonnages. The five dozers on site were the exception – Rockwell is in a rebuild process for these machines, of which three are already complete and back on site.

“The new machines have also allowed us to streamline our mining process and derive maximum value from the kit. The PC2000, designed for stripping, is now being used for stripping where previously it was loading a mix of 100, 50 and 40 t trucks.” A 992 front end loader is used for loading onto nine 100 t trucks only and is already proving more efficient in terms of costs and maintenance.

And the results can clearly be seen – “we are moving larger volumes at lower costs.” So much so that the Rockwell team has already revised Saxendrift’s monthly earthmoving budgets from about 140 000 to 180 000 m³/month and Campbell is confident of increasing this closer to 200 000 m³/month. The mining fleet is now more than capable of mining higher volumes than ever before, Rockwell Diamonds signed a large lease deal with Eqstra for an entire new second hand earthmoving fleet including six Terex 100 t trucks and large front end loaders “and our process plants can match their throughput rates if they run smoothly, optimally and efficiently.”

The new fleet is further enabling Saxendrift and SHC to meet its increased stripping demands, which has not been necessary until now. “As we move into the second half of the Jasper ore body and back-end of Saxendrift we have to do stripping, albeit only at a 1:1 ratio. Our stripping volumes have increased our earthmoving capacity by 40 000 or 50 000 m³/month, which we are moving in addition to our stated mining output. In essence, this means we are earthmoving well in excess of 200 000 m³/month at Saxendrift.”

AS THINGS ARE
Campbell’s aspirations to hit 500 000 m³/month, with a strong balance sheet, remains a top priority, “although this is not possible without a deal or capital raise the way the company currently stands. Our strategy in 2013 was to build two new mines with working capital, which we did, anticipating that the share price would increase and allow us to raise capital.” Unfortunately, this didn’t happen (bearing in mind every diamond company is struggling with their share price at present). People are however impressed with what we have done and our management team’s performance, Campbell adds. 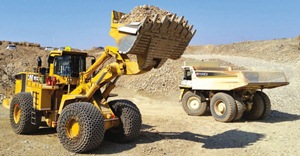 Optimistically, should all three operations – Saxendrift, SHC and Niewejaarskraal – deliver on their maximum mining rates, Rockwell Diamonds has the potential to close 2015 having delivered an increased average 400 000 m³/month, without any new investment, excluding a recent upgrade to Niewjaarskraal’s in-field screen to push output to 120 000 m³/month. 2014 year-end is expected to average between 300 000 and 320 000 m³/month.

It is important to note however that both Saxendrift operations have short lifespans remaining. “We believe SHC has another three to six months of life left, beyond its original closure date in December this year. As an extension of Saxendrift it remains a very low cost operation and we intend to exploit this for as long as possible.” At increased feed rates, Saxendrift’s life has likely decreased as well, from about five years to three. “We still have a lot of ground to explore and increase this, which we are working on at present.”

Expanding Niewejaarskraal or developing Wouterspan (the next mine) is the key to hitting the half million cubic metre milestone. “Either will have to be done on the back of a capital raise,” Campbell notes. “The key to Wouterspan’s development is scale. Geologically it is structured differently to our current operations and has much larger sand bars. The plant must ultimately be able to handle at least 150 000 m³/month to start, although our intention is for it to be more than double that in the long run. We are in the process of reviewing our plans, designs and options which will likely incorporate equipment from the SHC plant, particularly the two Bourevestnik sorters.”

2015 POSSIBILITIES
Campbell briefly indicates the possibility of raising money ‘on the back of a deal’ in 2015 but can provide no further detail at this stage. “Organic growth, expansion through corporate means and strengthening the balance sheet through a capital raising are all options on the drawing board for the new year, but remain contingent on certain factors.”

CAMPBELL’S VISION KIMBERLITES AND ALL
“I want Rockwell Diamonds to be a mid-tier southern African alluvial diamond miner with a large, strong alluvial asset portfolio capable of delivering well over 500 000 m³/ month – coupled with a strong balance sheet to manage the downturns and difficult periods.” A kimberlite project would be nice alongside some exploration properties as well. While the CEO believes kimberlite exploration is more viable to kimberlite miners, the right opportunity should never be overlooked if presented, he adds.

“I still believe there are kimberlites to be discovered in South Africa, which has hosted very little exploration activity over the last 20 years at least, despite the significant improvements in exploration technology.”