Enco’s CEO Neels Engelbrecht says the company has been expanding since it opened its doors in early 2008. “We are fortunate to be in a sector that presents a lot of opportunities,” he says of the company that focuses on projects in the energy, coal and infrastructure sectors.

This is borne out by Enco’s order book, which includes four coal related projects currently in the execution phase. These are EPCM work for Riversdale’s Benga project in Mozambique, as well as for two of Sasol’s replacement mines in South Africa and Total Coal’s Dorstfontein East project.

In a 50/50 joint venture with Goba, Enco Consulting won the contracts for Sasol Mining’s two new mine complexes in the Secunda region. The joint venture combines the shaft sinking and coal mining expertise of Enco with Goba’s materials handling and civil engineering design know-how.

One of these new Sasol mines, the 10.6 million tonne per annum (mtpa) Thubelisha project aims for its first production section to be up and running in January 2012, and will build up to full production with 12 continuous miners and three stonework sections in 2015. Thubelisha will produce coal for both Sasol Synfuels and the export market.

The scope of the Thubelisha EPCM contract entails the development of the complete mine complex, including the service, ventilation and decline shafts, and a materials handling system that features an 18 km surface overland conveyor, surge bunker and underground conveyors and surge bins. It also includes the supporting mine infrastructure in the form of offices, workshops, change house, water supply and power supply. The 43 month project began in August 2008. 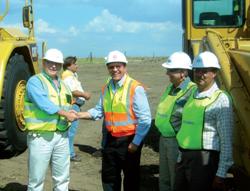 The Impumelelo project, the other new Sasol mine, has a very similar scope, only the surface overland conveyor is 28 km in this case and it is an 8.5 mtpa project, which is expandable to 10.5 mtpa. The target is for the first production section to be in place in July 2013, and the mine will build up to full production with 13 continuous miners and six stonework sections in 2014. This 42 month project, which began in August 2009, will result in a mine that produces coal for the Sasol Synfuels plant.

The Total Coal South Africa project is located five to 15 km east of Ga-Nala (Kriel) in Mpumalanga and follows upon pre-feasibility and feasibility work done by Enco. This project has a coal resource which has been delineated into both opencast and underground resources.

The fourth project in execution phase, which involves the infrastructure for Riversdale’s Benga project in Mozambique, includes in its scope of work the complex negotiations with the national electricity provider. However, it is something Engelbrecht says is not much different from what projects need to do in South Africa.

Site visit at Total Coal’s Dorstfontein mine prior to pre-feasibilty study. At present both pre-feasibility and feasibility studies have been completed.

With the duration of many of these projects being several years, it has placed Enco in a good position, though Engelbrecht says that the company certainly has the capacity to take on more such projects.

“We have a very strong coal mining team that looks at the front end portion of projects,” Engelbrecht says. “We do the initial technical assessment, work such as scoping pre-feasibility and feasibility studies. We typically get involved once the initial drilling for resources has been done, and a Competent Persons Report has been issued.

“We can assist companies with the raising of finance and help them take a project to the next level, that of the bankable feasibility study.”

Engelbrecht, who is president of Read, Swatman & Voigt (RSV) USA and has successfully started three RSV companies, RSV USA, RSV Australia and RSV Limitada in Mozambique, does have an international perspective of markets and concomitant opportunities for projects. Hence it is little surprise that Enco sees opportunities outside South Africa in the Southern African region.

The company is looking to undertake more projects around the area of the Moatize coalfields, and is looking at Botswana, Zimbabwe and even Tanzania for further project work in the coal sector.

RSV has a number of linked enterprises focusing on other commodities serving the global mining and industrial sectors. Enco’s expertise is focused on coal, energy, and infrastructure work. This includes on-mine, off-mine and general infrastructure, and covers ore reserve exploitation, mine design, engineering design, underground infrastructure, surface infrastructure, project management, safety health environment and quality (SHEQ), risk and value management, process plants, equipment design, and electrical instrumentation. When it comes to specialised environmental studies, while it does not have the expertise in-house, it facilitates the process.

“We don’t have geologists in-house, but would typically evaluate the project once it has a SAMREC, JORC or NI-43 101 code resource. We have got the capacity to assist with financing the project as we can do the financial Mining Review Ad (curved).indd 1 2009/10/16 03:22:20 PM modelling and the resource generation support to enable the project to obtain capital.

“We have a strong drive to cater for the junior mining market, and that requires a different culture. It involves a fast turnaround and we pride ourselves on that,” Engelbrecht says.