Freetown, Liberia — MININGREVIEW.COM — 17 September 2008 – The only underground diamond mine in the West African state of Sierra Leone has sold its first diamonds, bringing it a step closer to full-scale production and a probable stock market listing next year.

“The Kono project is working under an exploration licence, but plans to apply for a full diamond mining licence next year,” Stellar chief executive Karl Smithson told Reuters. He did not give the total value of last week’s sale, but said the largest diamond, at 10.55 carats, had raised US$31 000 (almost R240 000).

The Kono project is the first underground diamond mining scheme in Sierra Leone, charting the length of kimberlite dykes beneath the surface in the diamond-rich east of the country. Currently mining at up to 65m depth from two shafts, the company hopes to dig down to 120m, requiring underground railway tracks and ventilation systems.

“It’s pioneering stuff in this country,” Smithson told Reuters. “We need to test for another three to six months, which probably involves another three sales, but we’re quite confident that we are going to get over US$200 (R1 500) per carat – that’s very good, very high value,” he added.

The Kono mine, like Stellar’s wholly-owned Mandala alluvial prospecting operation in neighbouring Guinea, expects to start full production next year. 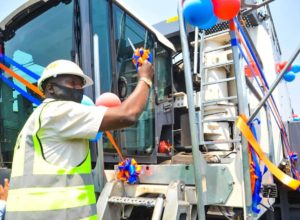