SIERRA LEONE’S KOIDU MINE CONTINUES ITS RAMP UP

Energem, which owns 40% of the Koidu diamond mine in Sierra Leone, is predominantly an oil and gas group, with only an approximate 15% of the company’s value attributed to its diamond mining and exploration. The company, which was formerly Diamondworks, has expanded to become a mid-tier group, and in so doing its mining arm has been diluted.

However, Brian Menell, chairman of the group which now employs about 1,100 people, says this does not mean that Energem isn’t looking to expand its solid minerals business. “We are using our political understanding, credibility and infrastructure in some 17 African countries to look for mineral opportunities, and we are looking at minerals beyond diamonds as well,” he says.

The presence in these various countries (including South Africa, Sierra Leone, Chad, Nigeria, Benin, Sao Tome and Principe, Gabon, Congo, Democratic Republic of the Congo (DRC), Malawi, Zambia, Zimbabwe, Kenya, Central African Republic (CAR), Angola) ranges from an ethanol plant in Kenya and some 200 people to an exploration office containing four people in the process of being opened in the CAR.

As a more substantial entity than an average junior mining company, Menell says that Energem’s niche is projects in the US$20 million to US$200 million range. These are the mid-size projects many juniors are not equipped to handle and the majors don’t find worth spending the management time and resources on.

The company’s trading division, Republic House, which deals mainly in copper and cobalt, is the biggest independent shipper of copper in southern Africa. It deals with groups such as First Quantum Minerals, Gecamin, Ongopolo, Palabora Mining Company, and does US$280 million of trade. In a separate venture, Energem is also looking at larger mineral projects. It has formed a joint venture alliance with CITIC, the biggest of the Chinese state-owned investment companies, an entity with a valuation of US$200 billion. That The Koidu diamond mine is the only kimberlite pipe mine in Sierra Leone and it forms the mining focal point of diversified oil and gas, mining and exploration, commodities trading and logistics group Energem. company is primarily interested in infrastructure projects, but it will be interested in pursuing projects such as iron ore ventures, for example.

The 50 tonne per hour plant at
Koidu in Sierra Leone.

However, Energem’s mining focus at the moment is the Koidu diamond mine, which operates a 50 tonne an hour dense media separation (DMS) plant. Energem and equity partners have to date spent around US$21 million in Sierra Leone. It is thus far the biggest foreign investor in the country, though this could soon be overtaken if a US$70 million investment to revive Sierra Rutile goes ahead.

Koidu was redeveloped in 2003 and began production in 2004. An old plant, installed in 1997, is still in reasonable condition and Energem is considering adding this 20 tonne/hour plant to its existing capacity. This could take the operation to about 75 tonnes an hour.

The main production comes from the K1, kimberlite pipe, which is mined as a vertical pit and has a surface area of some 3,000 m2. The diamonds from this pipe are valued at US$230 a carat and the pipe has a grade of 55 carats per hundred tonnes. The indicated and inferred resource for the K1 pipe is 835,000 carats, contained in some 1.5 million tonnes of ore.

Energem operations manager, Brett Thompson, says that the operation is currently producing around 10,000 carats per month and this will increase to some 12,000 to 14,000 carats per month, when the main K1 vertical pit, which is still under development, is fully commissioned. He anticipates that the K1 pipe will supply the plant with about 20,000 tonnes a month when it is fully operational, and an additional 5,000 tonnes a month will come from the 5,000 m2 K2 pipe as well as various kimberlitic dyke zones.

The grades from K2 pit are lower, some 26 carats per 100 tonnes, as are those in the kimberlitic dyke structures. K2 has indicated and inferred resources of 760,000 carats contained in 2.9 million tonnes. These are valued at US$180/ct and the aim is to develop K1 so that most of the mining takes place from there. There are also some 950,000 carats of resources in the dyke zones, contained in 3 million tonnes of ore.

The K1 resource has been evaluated down to about 300 metres below the surface. The vertical pit, which is collared at 50 metres below surface and can reach to 200 metres, will have a life of another two to three years after which the Koidu K1 pipe will have to go underground. Shaft Sinkers are currently assisting in the development of the vertical pit and are being used to consider the options for taking the mine underground.

Thompson says, given the nature of a kimberlite pipe, there is no reason to assume that the pipe does not continue to 500 metres or further below surface. “By 2008 or 2009 we will have to be underground at Koidu,” he says.

Energem’s other significant project in Sierra Leone, the Tongo kimberlite fissures, will be more easily accessible after the company completes rehabilitation of 50 km of road from Koidu to this site by the end of 2005. Previous sampling has shown the fissures at Tongo and kimberlitic blows there to have high grades, reaching 3-4 ct/t. The site office at Tongo will be ready in the next month or so and bulk sampling is expected to commence by early 2006.

Menell says that Tongo would have its own plant and Energem would not be looking at a plant of much less than 50 t/h. This means that Tongo has the potential be as large a producer of diamonds as the Koidu project. 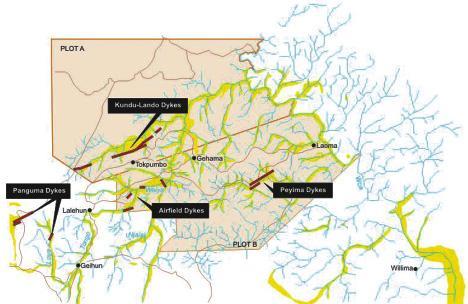 Local geology of the Tongo project.

Energem holds 4,200 km2 of mineral rights in the CAR. The CAR does not yet feature any commercial scale mining as yet, but in addition to Energem’s presence De Beers and others are exploring in the country. The CAR’s official diamond production is about US$100 million a year at values of US$120-140 a carat. This volume can be comfortably doubled to take into account illegal diamond trade. In the CAR Energem’s mineral rights comprise the 1,683 km2 Ouadda, the 963 km2 Kotto, the 749 km2 Bria and the 744 km2 Bangana properties. The priority area for the company is Ouadda, which appears at this stage the most prospective from reconnaissance work. Energem’s strategy is to use existing and new satellite imagery, recent field data as well as in-house historical data to identify bedrock concentrations of diamonds that would justify bulk mining methods. The plan is to complete an assessment of targets by the end of 2005 and to be breaking ground in early 2006.

Overall Energem’s solid minerals exploration budget is now some US$2 million and is expected to increase to over US$4 million a year from 2006 as fieldwork commences in identified target areas. MRA