Following delivery of the new machines to the opencast mine near Delmas, Mpumalanga, at the end of March, they were put to work as the primary production plant on the company’s long-established Weltevreden mine. One of two 110 tonne Komatsu PC1250SP-7 hydraulic excavators already owned by the company remains on this site to assist the PC2000-8 load the new dump trucks.

The company’s other existing primary production machines, consisting of the second PC1250SP- 7 excavator and a 76 tonne Komatsu PC800SE-7 excavator, have been redeployed at a new open pit operation adjacent to the existing workings, known as the East Block.

“The reason for this changeover is that the stripping ratio at the new workings is much more favourable than at the established mine. It makes more sense to use the smaller primary equipment there now that we have the higher capacity machines, which in turn are more productive in the more demanding conditions at Weltevreden,” mine manager Paul Stuart explains.

Whereas at Weltevreden the soft overburden is around 25 metres thick and the rock overburden about 30 m thick, with a 35 m thick coal seam below, in the East Block the soft and hard overburdens are only about eight and six metres respectively, giving access to a seam of about 18 m.

The new mine, which went into production early last year, is rapidly ramping up production with the aim of achieving a monthly average of 100,000 tonnes of coal by October this year to meet the requirements of Eskom’s Grootvlei power station near Heidelberg.

Grootvlei is one of several existing power stations being brought back into operation after being mothballed for an extended period. Stuart Coal won a contract from Eskom in February this year to supply coal to Grootvlei. East Block is estimated to have a coal reserve in excess of 35 million tonnes.

The 200 tonne Komatsu PC2000-8 hydraulic mining shovel/backhoe, which has a net power of 713 kW, was introduced into the local market by Komatsu Southern Africa in at the beginning of 2007 as successor to the 184 tonne PC1800-6. 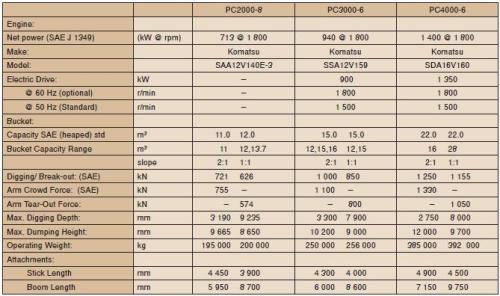 The 91 t payload Komatsu HD785-7 rigid dump truck, with a net power of 879 kW and a heaped capacity of 60 m3, made its local debut early last year. It delivers the highest engine gross power to gross weight in its class.

The engine is equipped with a two-mode selection system with variable horsepower control (VHPC), which detects if the truck is loaded or unloaded and selects the optimum engine power setting mode, thus providing both high production and low fuel consumption.

An anti-pitching oil-cooled multiple disc retarder applies retarding force on all wheels, thereby reducing the risk of wheel-lock and allowing for stable downhill travel. The machine is equipped with a fully-automatic, planetaryshaft type transmission. The electronically-controlled all-clutch modulation system optimises the clutch lock-up process for smoother shifting and minimal torque shock. It also features transmission skip-shift, which automatically selects the gear according to the slope of the grade when driving uphill.

Gerhard Kloppers of Komatsu SA’s mining division explains: “If the control system determines that downshifting one gear at a time is not required, it automatically selects the correct gear according to the slope of the grade. It reduces the number of transmission down-shifts, allowing for a smoother drive, improved operator comfort and reduced spillage of material.”

A further enhancement is a fully hydraulic braking system, resulting in high reliability and easier maintenance. “This system means that there is no air system to bleed, nor condensation of water that could lead to contamination, corrosion and freezing,” Kloppers comments.

“In addition, extra reliability is designed into the braking system by the use of three independent hydraulic circuits, so that hydraulic backup is always available should one of the circuits fail.” Other noteworthy features of the HD785-7 include: