Dwyka Resources, listed on the Australian Securities Exchange and AIM, is preparing to open a gold mine in Swaziland from early 2011, and has also secured full ownership of a high-grade nickel project in Burundi.

In an interview with Mining Review Africa, company CEO Melissa Sturgess sketches the evolution of both the initiatives. From early 2007 Dwyka Resources underwent a transformation from a junior diamond company to the diversified exploration and development group it is today. “About two years ago we took a view that our growth prospects as a junior diamond company would be limited, and decided to look at other minerals and commodities,” Sturgess explains.

In March 2007, Dwyka signed a legally binding memorandum of understanding with South African-listed Swazi Gold Ventures, securing the rights to an eventual 90% interest in Swaziland Gold, which in turn owns the Swazi gold project in Swaziland. Dwyka paid US$200,000 plus shares worth US$1.5 million to earn a 50% interest in the project.

To earn 70%, the company committed another US$750,000 to the project by June 2008. It now qualifies for the 70% shareholding on payment of a further US$200,000 plus another US$1 million worth of shares. “We haven’t taken up this option yet although we are entitled to it,” Sturgess says, “as we are looking at linking up with some other projects in the region, either in Swaziland or in the adjacent Barberton area of South Africa.

We haven’t decided whether to continue on our own, or to bulk it up with some other projects. The idea is to bring a bit more substance into the equation, because at the moment anything in the very junior sector, where we are, is very tricky.”

“Currently we are showing a 450,000 ounce reserve,” Sturgess says. “We believe we can reach one million ounces. Looking at an initial review of the geology, the company believes the project has the potential to deliver a reserve of more than two million ounces of high-grade gold mineralisation.” 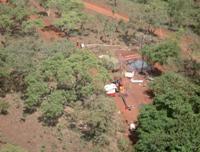 Skytop500 drill rig undertaking phase one drilling on a priority VTEM-generated target at the Muremera nickel project in Burundi.

At this time Dwyka Resources is still in drilling mode. “As we drill and increase the number of ounces, we are conducting a concept study.

“The Barberton geology is very similar to what we see in Australia,” she says. “What we see is narrow veins with very high-grade intersections, and once we start to get those veins connecting up, we move up the curve. The study also helps us look at aspects like how we would build the plant, and where it would be located. It’s not going to be a huge project; we will probably go straight from this concept study to a bankable feasibility study (BFS),” Sturgess suggests.

“I would say that we will complete the concept study by the end of this year, when it will hopefully lead us straight into a BFS. We would probably give ourselves six months to complete the BFS and should be in a position to make a final decision to mine by mid 2010.

“You would then need six to nine months to build; you would be looking at starting production during the course of the first half of 2011, probably the second quarter,” she estimates.

Turning to the nickel venture, in January 2007 Dwyka Resources acquired the Muremera nickel project in Burundi through its wholly-owned subsidiary Danyland Limited, which holds the exploration rights for nickel and associated minerals in the project area.

Muremera is located within one of the world’s principal nickel provinces, only two kilometres from, almost adjacent to and in the same geological sequence as, the giant Kabanga deposit in Tanzania.

Controlled by Xstrata/Barrick, the Kabanga project is thought to be the world’s largest undeveloped nickel sulphide deposit, with a resource of 47 million tonnes containing between 2.3% and 2.8% nickel. Muremera’s prospectivity led to a commitment from mining giant BHP Billiton to spend US$5.2 million to earn an interest in Danyland.

Subsequently, Dwyka secured 100% ownership of Muremera following an agreement with BHP Billiton, and is proceeding with the planned exploration programme. Dwyka will retain 100% ownership, even though BHP Billiton met its earn-in requirements, having invested in excess of US$7.3 million into the project.

“We began drilling again in April. There are three targets that were generated from the analysis of the last round of drilling done by BHP Billiton,” Sturgess says.

“They are about 10 km from the Barrick/Xstrata Kabanga project, and interpretation of data reaffirmed Dwyka’s view that the geology at Muremera shows many similarities to this neighbouring project.

“We firmly believe that demand for nickel will increase and Muramere is a world class, high grade nickel project. The exciting element is that the only thing separating Muremera and neighbouring Kabanga is a geographic border. 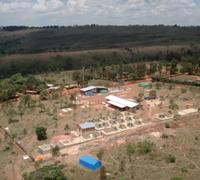 Originally with Billiton, Dwyka had planned to reach a concept or prefeasibility study within two years, “and I don’t see why our timing should be any different,” Sturgess says.

“If this project turns out to be is as big as it could be, according to various indications, it would not really be a Dwyka project. It would not be in our business plan to bring something of this size into production, and we would definitely be looking for partners.

“Everyone is so excited by that belt that if we hit something that is vaguely interesting, I think we will have people knocking on our door,” she says.

“I spent two days in Tunisia, where we had a round table conference of the Burundian, Rwandan and Tanzanian governments, the World Bank and the IFC, as well as Chinese and Russian infrastructure developers. We all got together to discuss the construction of a railway line from the Tanzania/Burundi border to Dar es Salaam,” Sturgess says.

“The Development Bank of South Africa provided a grant for a feasibility study on the project, thus the economics has been done on building the line and refurbishing the port of Dar es Salaam. They are talking to us about what sort of tonnages we think we might be able to generate to feed the line. The price tag on this project will be more than US$5 billion.”

Referring to South Africa, Sturgess reveals that Dwyka has a 48% shareholding in a company now known as Carlton Resources which is looking for projects. “The company is looking at a number of possibilities, maybe in Africa, but not necessarily South Africa.”