Noventa, a Jersey-based company focusing on tantalum mining in Mozambique, plans to have two mines in the country at full production of tantalum – a rare speciality metal widely used in the consumer electronics industry – before the end of 2011.

In an interview with Mining Review Africa, company chairman Eric Kohn says that the company intends to bring its Marrapino mine to full production by the first half of 2011, and to start work at its Mutala mining concession, subject to further geological work, before the end of the year.

He adds that Noventa, which is listed on the AIM, is planning to list on the Toronto Stock Exchange this summer. “The TSX is probably the foremost exchange for mineral and extractive companies, and we feel it is appropriate that we should be there,” he says.

“We have three mining concessions in Mozambique; Marrapino, on which we have an operating plant, equipment and infrastructure, and Mutala and Morrua which will become mines in their own right in due course. “In addition, we have six or seven other exploration licences, and we will actually be starting work on them this summer.”

Noventa is working on a three-year plan which it hopes to present to shareholders within the next few months. “At this stage various options are being considered, among them expansion of throughput at the Marrapino plant, the mining of Mutala and Morrua, and further exploration work. A major sample programme will be carried out at all the exploration sites as the first step in this programme,” Kohn says.

“Our aim is to be a long-term tantalum supplier, “Kohn states. “Logically, at some time in the future, we need to look at how we can enhance the value of the product. We see ourselves as a Mozambique company, and clearly, if the opportunities are there, we will look at this type of expansion.

“The Marropino mine is our most developed project, and is located some 350 km northeast of the provincial capital, Quelimane. Previous management invested about US$65 million in the project, which was put on care and maintenance early last year because of continuing losses,” Kohn adds. “I took over in July last year and put in a new board of directors and new management.”

Hauling of ore in full swing
in the open pit at Marrapino.

Small-scale production was resumed at Marropino using the existing equipment and confirming some of the test results on a larger production scale while allowing our new team to build up and gain experience. “The modifications we need to make to the plant have not yet been tackled. It is our intention to modify the plant from the current single circuit taking one fraction size, and move to three circuits that separate out three different narrower fraction sizes in separate circuits using different spiral types and tables, with semi automation of the dry plant to maximise recovery.

“In addition, we will add crushing equipment to process the whole orebody to the ideal fraction sizes, eliminating waste, and also remove mica before separating the material in the spiral circuits. We are using the existing spirals to do batch processing using tailings as our proving process, instead of doing the three fractions,” he points out.

“This expansion will not be expensive. We expect that, with infrastructure, capital equipment and working capital, we will need about US$25 million.

“The electrification programme to provide grid power to Marropino and Morrua reached us late last year, and has now been connected to the grid. We also retain three generators as a back-up,” Kohn adds.

“The plan is to have everything in place before the end of this year, and to have it ramped up to full production by the first half of next year. Full production will be 500,000 pounds of contained Ta2O5 a year,” he says.

This development has resulted in several changes to the company. “Our operational headquarters is now in Maputo, the management of the company all speak Portuguese, and the mine is being led by a Mozambican who is also a director of our main operating subsidiary, Highland African Mining Company Limitada,” Kohn points out.

As far as reserves and life of mine are concerned, when the company went to the AIM in 2007, a competent person’s report was done by SRK, and at present a Canadian technical report is being prepared for the TSX listing. “However we believe that, with the three mining concessions combined, the life could be up to around 15 years,” he says.

“Mutula is two and a half hours away, and Morrua is 45 minutes away by road from Marropino. Marropino will remain the operational base. Initially we will supply pre-concentrate from Mutula. Then, as Marrapino runs out, we will move the wet plant from there to Morrua, but the infrastructure, accommodation and the dry concentration plant will remain at Marropino.” Kohn explains.

“As regards Mutula, our plans are still subject to geological work, but we intend developing the mine and starting production there in 2011. It will produce preconcentrate which will be trucked to Marropino for processing. Production from Mutala will depend on how much we are still getting out of Marropino, and it will be geared to meet the capacity of our equipment at Marropino.”

Noventa has long-term fixed-price off-take agreement/s in place for the sale of a substantial proportion of the tantalum concentrate it will produce. The company would appear to be in a good position with an apparent shortage in the tantalum market.

There are three issues that affect global tantalum supply, according to Kohn. “First, I believe that we are one of only three or four mines actually producing tantalum. Second, the US Congress has brought in laws on ethical mining aimed at stopping tantalum mining in the DRC from exploiting people, which will have an effect. Also, the United States has indicated that it wishes to rebuild its stockpiles, which will add to global demand,” he says. 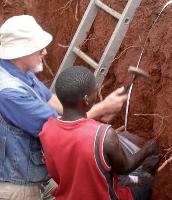 “In addition, there is a voluntary code among the electronic manufacturers – the EICC – which wish to have all tantalum sourced and certified. This means one will not be able to buy tantalum or use it in an electronic product unless its origin can be proved – that’s to eliminate the conflict tantalum. Given the extensive use of tantalum in nearly all electronic products that condition has wide reaching implications. That combination of circumstances will certainly have an effect on the international market,” Kohn emphasises.

The overall global market for tantalum is estimated at about 5.0 million pounds a year based on various independent reports, and if the trend of the past 15 years continues, demand could continue to grow by an annual 5% to 6%.

As far as other commodities or locations are concerned, Kohn quotes the expression: “If you want to build a house you had better make sure your foundations are right first. In that vein, we have to get our first operation working properly and not make the mistakes the previous management made. Our approach has been one of steady methodical growth, delivering what we indicated to the market. This is important for our shareholders to engender confidence, especially with the markets in such turmoil today,” he concludes.