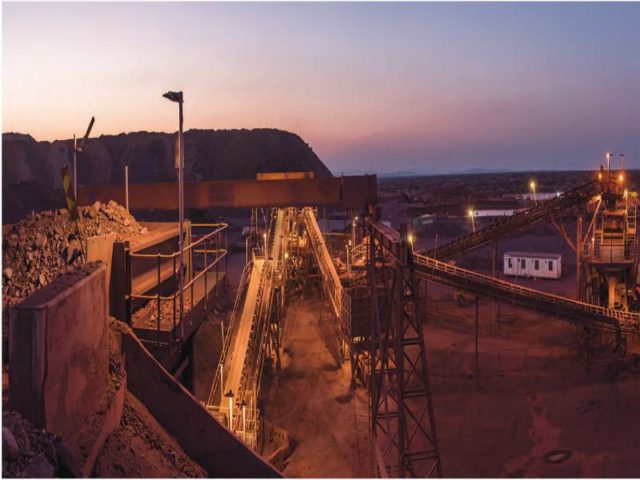 South Africa’s largest iron ore producer Kumba Iron Ore has a strategy to extend the life of its Sishen mine.

Having first become operational over 70 years ago in 1947, Sishen only has 13 years of mineable life left at the current production rate of around 37 Mtpa of ore but believes that the implementation of its two-pronged strategy focused on technology and exploration is the key to extend the life of its flagship assets.

This will enable the company to maintain its position as a long-term, low-cost producer of high quality iron ore now and into the future.

The Sishen mine is one of the largest open pit mining operations in the world – 14 km long and 2.4 km wide (5 km at the widest point) with a depth of 275 m divided into the South and North mine.

In light of its maturity, Sishen has recently undergone a significant reconfiguration from a volume to value asset.

As a result of the reconfiguration, the mine has embraced productivity improvements as a means to become more resilient throughout the commodities cycle.

With most of Sishen’s costs tied up in loading and hauling, accounting for 65% of total operational costs, Kumba, together with the Sishen mine management have implemented programmes focused mainly on delivering improved load and haul efficiencies.

This is thanks to the reduction in truck fleet highly motivated workforce, a better mine design, improved blasting and a redesigned shift system.

Despite improving on the load and haul productivity at Sishen, Kumba CEO Themba Mkhwanazi said that more potential exists in improving the performance of the mine even further.

Speaking at the site visit, Mkhwanazi said that Kumba has a clear transformation agenda focused on driving all-round performance improvements at both the Sishen and nearby Kolomela operations to unlock Kumba’s full potential.

This, he believes, can be achieved through improved performance of its current assets, investment aimed at growing its core business in the medium term, the development and implementation of new technologies and by extending the life of its mines.

“These improvements will all ensure an all-round more robust and more resilient Kumba in terms of withstanding cost pressures as well as currency and price fluctuation headwinds,” Mkhwanazi notes.

The journey to reaching full potential

It was this rational that led the company along a journey aimed at helping to unlock Kumba’s full potential and ultimately repositioning the business for the long-term.

Kumba’s journey began in 2014 when the company’s technology focus escalated from small-scale initiatives to a full blown key business strategy.

During this four-year journey till 2017, Kumba set in motion 12 technology projects at a cost of R749 million at both Sishen and Kolomela.

Having successfully implemented the best possible technologies of today at both the Sishen and Kolomela mines during this period, Kumba reviewed and updated its three-horizon strategy roadmap at the end of 2017 aimed at introducing technology as a means to reduce costs, boost productivity and extract maximum value from its two mammoth iron ore operations from 2018 into the future.

Another area in which technology is being harnessed at Sishen is to improve ore recovery rates and improve resource utilisation.

Kumba is currently mining material with a +40% iron content cut-off grade, while anything with a lower iron content is regarded as waste.

By lowering the ore body cut-off grades, an ultra-high dense media separation (UHDMS) plant can be used to produce a high-quality iron-ore product from low-grade material.

Kumba is underway with a bankable feasibility study evaluating the installation of a large-scale UHDMS plant at Sishen to treat 260 Mt of stockpiled waste material.

McGavigan says that Kumba has already successfully piloted the UHDMS technology, further noting that UHDMS would have the capacity to produce another 1-2 Mtpa of high-grade iron ore, thereby further extending the life of the Sishen mine.

Beyond this, the company is looking to further lower the cut-off grade through the use of a cost-effective technology able to liberate even lower grade material as part of its longer term technology vision.

Another means by which to extend Sishen’s mine life could result from an active exploration programme in the Northern Cape, focused on and around Sishen and Kolomela tenements, as well as in the area connecting these two assets.

“We are confident and excited about the results of the exploration programme and potential prospects it may hold,” Mkhwanazi says.