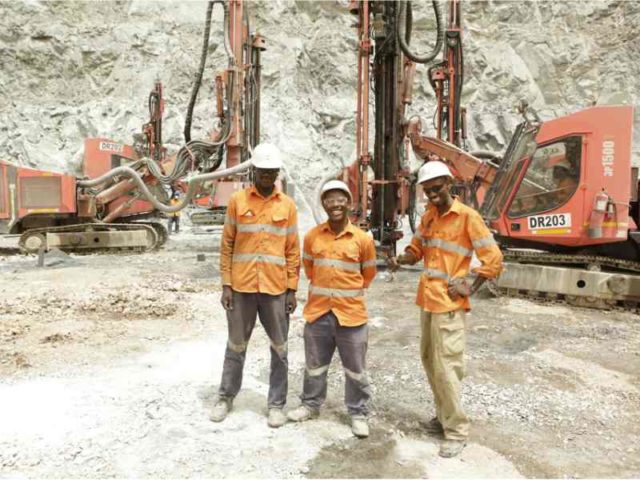 TSX/OTCQX-listed West African gold producer Teranga Gold has committed to a significant growth plan which will increase its annual gold production from just above 200 000 ozpa to a target of around 500 000 ozpa.

With its second mine in construction and a well advanced exploration project in the pipeline, this goal is well within reach.

A number of attractive earlier stage exploration assets within its portfolio are also being evaluated which could elevate production well above the half million-ounce mark in the longer term, CEO Richard Young tells Laura Cornish, editor of Mining Review Africa.

Management’s approach to growing the company has been based on making smart acquisitions and entering into new joint venture partnerships at the bottom of a commodity cycle – which started about five years ago.

“These deals have seen us transition from a single asset, single jurisdiction producer to having a strong pipeline of organic growth opportunities in what we believe are three of the best West Africa countries to invest in – Senegal, Burkina Faso and Côte d’Ivoire,” Young starts.

Teranga currently owns and operates Sabodala, the largest gold mine in Senegal.

With a pipeline of attractive assets in its portfolio, the company is making quick work transitioning into a multi-asset, mid-tier gold company, and the development of its second mine – Wahgnion – will take it into the region of 350 000 ozpa.

This is well past the half way mark towards achieving its 500 000 ozpa gold production target.

A close-up look at Wahgnion

Teranga acquired Wahgnion (formerly known as Banfora) in October 2016 as part of its acquisition of ASX-listed Gryphon Minerals.

The fully permitted, high-grade, open pit project is located in the south-west of Burkina Faso.

It contains exploration licenses covering approximately 1 000 km² and is encapsulated in the Loumana Birimian greenstone belt within the country. Teranga owns 90% of the project with the remaining 10% owned by the government.

Teranga renamed the project to Wahgnion to better reflect the local culture and connection with nearby communities.

“Our intention behind expanding beyond Senegal is to replicate our success at Sabodala, and Wahgnion demonstrated substantial geological and metallurgical similarities with our first mine. In combination with the attraction Burkina Faso holds as a mining-friendly jurisdiction the project was identified as a good fit for the company,” Young reflects.

Early-stage earthworks on the project commenced in the latter half of 2017 and Teranga has since committed about US$100 million in development to date – nearly half of the $232 million capital cost for the entire project.

Construction of the process plant is scheduled to start in Q2, 2018. This will start a full-scale 18-month construction period with the first gold pour on track for the end of 2019.

At steady-state, Wahgnion will produce 120 000 to 150 000 ozpa of gold at about 1.7 g/t for nine years. This is based on an initial reserve base of 1.2 Moz. “But this is only the beginning for this project.  We fully expect to increase reserves and improve economics in coming quarters,” Young highlights.

The first improvement is expected in mid-2018, with a reserve update following the completion of a 73 000 m infill drill programme aimed at converting inferred resources to reserves.

Teranga is projecting a 25% to 50% conversion rate of the 700 000 oz in the inferred category and Young is confident this will improve the project’s overall economics.

The second improvement to Wahgnion will reflect the success of the company’s programme to drill out more than a dozen previously identified targets within close proximity to the mill.

To date, only four targets have been included in the initial reserve base of 1.2 Moz.

“There are more than a dozen targets on the regional land package – all within trucking distance of the mill’s planned allocation.”

Increased reserves will initially extend the mine’s lifespan to around 12 years although the CEO is confident of reaching between 15 and 20 years – comfortably mining between 120 000 and 150 000 ozpa.

“This is a long-term quality asset for Teranga.”

Taking a closer look at the operation – Wahgnion will largely be a carbon copy of Sabodala, only on a smaller scale – consisting of multiple open pits feeding a central mill.

The process plant will be located adjacent to the Nogbele deposit, which contains approximately 50% of the initial reserves.

The Fourkoura, Stinger, and Samavogo deposits are located 6, 15, and 25 km, respectively, from the process plant.

The haul trucks selected have the ability to haul ore directly to the process plant.

This is expected to reduce re-handling costs and minimise waste movement through optimised pit designs for the near-surface ore bodies. Teranga will operate its own fleet.

The process plant design is based on a conventional CIL gold process flowsheet consisting of primary crushing, SAG and ball milling, with a pebble crusher, CIL tanks, elution, electro-winning and gold smelting to produce doré onsite.

Throughput is expected to range between 2.2 and 2.5 Mtpa, depending on the blend of soft and hard ore.

The average predicted plant recovery is 92%, with soft material recoveries from some zones reaching as high as 95%.

Young has every confidence in Australia’s Lycopodium, the lead engineer on the project. “They have built the majority of new gold mines in West Africa on time and budget and we expect they should not encounter any difficulties in achieving similar results for this project.”

Young points out that Teranga does need to relocate a number of hamlets with the commencement of Wahgnion – about seven houses this year and approximately another 140 in 2019.

The entire resettlement and livelihood process will occur over a five-year period.

“We are conducting this process according to IFC standards and will leverage our corporate social responsibility activities on the back of this – providing significant benefits to local communities in the form of water and housing supply, sanitation, food security, education, sustainable economic activities and of course jobs.

Infrastructure will further aid in a smooth development process.

There is a paved road situated within 15 km of the mine site, which is located about four hours from Bobo-Dioulasso, the second largest city in the country.

“With about a dozen mines built in Burkina Faso, the Burkinabes know what to do.”

Because the area is not heavily electrified, Teranga is investing in the construction of a 23 MW heavy fuel oil plant, which will feed the operation’s power needs of between 10 and 14 MW.

And with no distinct rainy season, which is typical to most of West Africa, catchment dams and a pipeline to a nearby river (for back-up supply if needed although this is unlikely) will be established.

Mine number three potentially on the horizon

As part of its acquisition of Gryphon Minerals, Teranga acquired two exploration properties in Burkina Faso, one of which is named Golden Hill.

The company has an earn-in agreement on the Golden Hill property with ASX-listed Boss Resources pursuant to which Teranga, as the operator, can earn an 80% interest in the joint venture upon delivery of a feasibility study and the payment of A$2.5 million.

The property is located on the prolific Houndé belt – which is home to a number of operating gold mines.

Teranga has been drilling at Golden Hill since Q1 2017 and has made a number of high grade discoveries on five targets to date – all close to surface and have demonstrated good grades (2 – 7 g/t).

“We are looking to declare an initial resource on the most advanced of the targets before year end. In light of the results, we believe Golden Hill has the potential to be our third mine and could move into feasibility stage next year if we continue to have drill success. Should everything continue to fall into place, we would look to build this project in 2021 when we are generating cash flow from both Sabodala and Wahgnion.”

If production at Golden Hill commences in 2022-2023 as Young envisions, the company will successfully reach its 500 000 ozpa target.

Through its cornerstone shareholder, Tablo Corporation, Teranga picked up a very large and prospective land package in Côte d’Ivoire about 18 months ago.

Since then the company has identified a 3 x7 km anomaly where no previous work has been done. Drilling results are expected shortly.

In December last year Teranga added to its land holdings in Côte d’Ivoire, entering into a memorandum of understanding with Sodim Limited, a private investment company, to establish a joint venture for the exploration and development of the Afema land package.

The Afema JV land package is located in southeast Côte d’Ivoire and covers more than 1 400 km², consisting of the Afema mining license and three exploration permits.

It has a historical near-surface 2 Moz oxide and sulphide resource within an area hosting several gold mineralised structures on extensions from prolific Ghanaian gold belts.

“Côte d’Ivoire remains one of the most prolific regions for gold discoveries and is largely untapped. As such, we see great potential for significant growth on the back of our projects in this country,” Young concludes.