The current economic crisis has negatively impacted virtually every industry. Demand is down for almost all goods and services. This has hurt commodity prices for base metals such as copper, aluminum, nickel and zinc, which are driven by industrial demand. Precious metal prices, such as gold and silver, have generally held up better than base metals, however, day-to-day prices, particularly for gold (which is viewed as a hedge against economic uncertainty), are extremely volatile.

The mining industry has enjoyed a long bull market, driven by the boom in the so-called BRIC countries – Brazil, Russia, India and China. Starting at the bottom of the cycle in October 2001, commodity prices peaked sharply in July 2008 before the plunge. However, commodity prices are still well above historical norms, and are currently experiencing an upward trend:

Any mining company that has access to any of these financial resources is encouraged to take advantage of them, wherever and whenever available. But, since these resources are generally not available, where does this leave mining companies today?

Bringing a mine from exploration to production normally takes from seven to nine years.

However, unfortunately, many exploration companies will not survive. If they were able to raise money before the stock markets crashed, they may be able to last until market sentiment turns – but nobody really knows when that might be.

Production Companies
Production companies may be enjoying the cash they generated over the last several years because of high prices driven by significant demand from the BRIC and other developing countries. These companies need to continuously replenish their reserves as their existing reserves are mined out. They can do this either by buying reserves through acquisition of other companies, or through discovery and development of new mines. 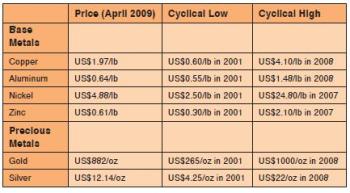 Mergers & Acquisitions (M&A)
We anticipate continued consolidation in the mining industry, but the mergers will be different than during the bull-run period.

During the bull-run, it was felt that larger companies could attract investors and undertake bigger projects. From 2005 to 2008, the number of mining deals worldwide roughly doubled, from 653 deals in 2005, to 1,300 deals in 2008. The number of deals over US$1 billion surged from eight in 2005 to 25 in 2007 (source KPMG LLP). Of note was Rio Tinto’s acquisition of Alcan – the largest mining deal ever valued at US$43 billion.

Today, there are more friendly deals between junior and mid-tier companies that need strategic mergers in order to survive, and more hostile take-over attempts because of perceived gaps in value between what the selling shareholder thinks the target company is worth, and the company’s current trading price which the bidder hopes to pay, usually a depressed market price, with some notional control premium.

Exploration companies are definitely at risk in the short and medium term because they are having great difficulty gaining access to capital. But production companies that are flush with cash from the high prices that have lasted for several years should be able to weather the storm – with prices still high by historical standards.

National Instrument 43-101 – Standards of Disclosure for Mineral Projects, which is the guideline on how public companies can disclose scientific and technical information about mineral projects, is supervised by the CSA and is considered by many mining professionals to be the gold standard of disclosure of mineral resources and reserves.