Bird’s excitement about Madagascar almost threatens to overshadow Tjate, particularly following favourable results from geophysical work done on the company’s Lavatrafo property in the Londokomanana region located some 150 km north of Antananarivo. This has led to Jubilee commissioning a 2,000 metre drilling programme there.

The first borehole of that programme has intersected a x70 metre-wide multi-metal (nickelcopper- platinum-palladium) formation at a depth of 37 metres. The intersection over the entire width (from 38 metres to 108 metres) graded 0.23% nickel; 0.11% copper and 1.05g/t 3E (platinum, palladium and gold). The platinum to palladium ratio is 1 to 1.

Hennie Blignault, consulting geologist, to Jubilee and a former group geologist of Gold Fields, says, “This discovery outside the South African Bushveld Complex is extremely significant in world terms.”

“If we can test and prove our model for this target we could have a world class nickel- copper deposit with significant platinum group metals (PGM) credits on our hands,” Bird says.

Jubilee was formed as a platinum focused junior, and with this intent sought out prospective platinum properties in various parts of Africa. A boom in base metals prices has coincided with Jubilee discovering promising base metals targets on its concessions in Madagascar.

But the excitement of Madagascar aside Bird, who began his mining career with the National Coal Board in England, says that one should not forget that Jubilee’s South African projects are in a country with a well established industrial infrastructure supportive of mining. “It is a country that understands mining, and the new regulatory environment has offered opportunities for foreign juniors.”

Bird, who became an entrepreneur on joining Lion Mining Finance Ltd in 1995, saw the opportunity presented by the new ‘use it or lose it’ mineral rights regime in South Africa. With the majors having to farm out their own promising PGM prospects on the Bushveld Complex they are not in the market for new ground. At the same time landowners recognised that their mineral rights were about to go to the state under the new legislation and were looking to make some gains before this happened. As a result Jubilee was able to put together a portfolio of prospective properties totalling more than 13,000 hectares located on the eastern and western limbs of the Bushveld Complex.

Even at the time Bird said one of Jubilee’s strengths was its ability to raise funds and as a result would not need to look only for greenfields exploration opportunities. It would be able to purchase a promising property should an opportunity turn up.

At the end of 2004 Jubilee purchased a 25% stake in Tjate Platinum Corporation for R35 million (US$5.4 million). Bird, who has previously managed nickel and copper projects including a mine in Botswana, became CEO of Tjate and is project manager of the bankable feasibility study for Tjate. Other shareholders in the project are New Platinum Corporation and Matuba Holdings, which trades as the Sebata Kgomo consortium. Jubilee also agreed to spend R14 million (US$2 million) to get a further 10% interest in the project. The 6,000 hectare Tjate property, made up of three contiguous farms in the eastern limb of the Bushveld Complex, is postulated to contain some 65 million ounces of PGMs. Of this some 22.8 million ounces would be attributable to Jubilee.

The Tjate property is immediately down dip of Anglo American’s Twickenham mine and Implats’ Marula mine. The drilling done so far has confirmed the thickness of the Merensky and UG2 reefs at Tjate are as predicted. In addition Tjate has the advantage that its ore body appears to be flattening at a 7 degree dip.

“It is an ore body that is quite easily defined and with its flat nature we could consider mechanised mining as viable where maybe other platinum mines could not,” Bird says in assessing the risks of mining Tjate. In addition the ore body has shown a favourable mix in a platinum palladium ratio of 1.8:1 with good base metals credits. Bird is also not scared of mining the Merensky reef, particularly in terms of grade control.

He envisages a primary access will ride the dip, and mining can be done with conventional stopes and scrapers. If the dip turns out to remain shallow, this lends itself towards flat longwall scraping to a common point. This would achieve effective mining at the face without major dilution.

In general Bird is not worried about the technical risks of a mine on the eastern Bushveld, and states that Jubilee’s strength is in its technical team.

“In fact taking into account that 50% of the working costs are accounted for by labour the real wild card is the rand-dollar exchange rate.”

He is bullish on the commodity itself and is only worried about intense research into substitution by manufacturers if platinum supply gets constricted to the point where the price goes above US$1,000 an ounce.

Jubilee was put together in 2001 after many of the junior exploration companies put together in the 1990s came short. The typical junior group of that time consisted of geologists that had built up assets. Bird, who once worked at the Nkana Central Shaft on the Copperbelt, says they banged their heads because he believes you can’t go into the rough world of junior mining without a recognised mining capability team. If market capitalisation is a guide Jubilee has proven this point, so far. The company has grown its market capitalisation from about US$10 million in 2002 to over US$50 million in 2005 and in doing so has outperformed the AIM junior mining sector, where it is listed.

“Finding the ore body is one thing, but bringing it to account is the clever bit, and those that can do that will be the kings. At the moment, because of the softness in the minerals sector during the ’80s and ’90s much of that mining talent is gone, particularly in an entrepreneurial context.”

“We did not buy Tjate to sell it, though obviously we are open to doing deals,” Bird says. He also says that Tjate is not dependent on other projects on the Bushveld Complex not happening to be in a queue. He is also not bothered as to what majors are doing. “If our studies show it meets the specifications for a viable project we will go ahead with it.”

Bird believes that with majors having struggled to meet long term targets, these companies, which control the PGM smelters, would be quite happy to get metal while forgoing the mining risk. 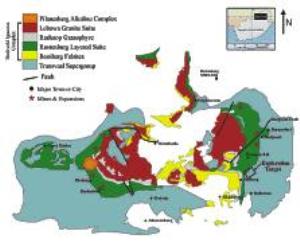 The scoping study for Tjate will be completed by November 2005, after which it will get in an independent company to check data. If exploration on Jubilee’s properties does yield a project it will mine it, and if it turns out to be too large it will look to joint venture. What Bird’s approach also indicates is how the situation has changed in favour of junior miners, or in favour of sellers as opposed to buyers of projects, compared to the last wave of the mid-to-late 1990s. “We are not looking for a deal, but if our shareholders see an opportunity for increased returns they will take it. Thus if any deal is done it will likely be a corporate one.”

Bird says that Jubilee’s projects in Madagascar offer the company an edge over its competitors, in that it does not have its assets in single currency, political and commodity baskets.

“Madagascar has been recognised for many years as having great geological potential, and that has not changed,” Bird says. “The political climate is now good, and there is a transparent mining code, though the country is infrastructurally challenged.”

However, Bird notes that Madagascar, and for that matter other parts of Africa, are not the nightmare in terms of access and infrastructure compared with the former USSR. For example, he says that the company managed to get a drill rig from Antananarivo, Madagascar’s capital, to the company’s Lavatrafo project some 160 km distant in a single 14-hour day.

And of course, in comparison, from an infrastructure point of view for mining destinations, South Africa is utopia.

Thus the Tjate project offers the opportunity for Jubilee to gain a production/development profile. The exploration portfolio covering the Bushveld offers consolidation value at the very least, and good potential for more platinum ounces. Its properties covering some 1,600 km2 in Madagascar offer the potential for what Bird describes as three world class exploration opportunities in diverse commodities. As a result Bird feels the acquisition of Tjate gives Jubilee good balance and he is confident this project’s economics will be strong. MRA