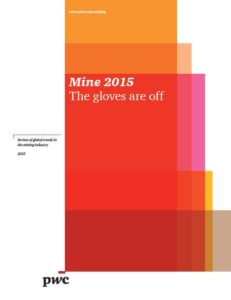 International – 2014 was expected to be a tough fight for the global mining industry with low commodity prices and short-term volatility increasing but now the gloves are off for the industry with widespread government intervention, internal industry conflicts and rising shareholder activism.

This is according to PwC’s ‘Mine’ report released on Thursday.

According to a new analysis of the 40 largest global miners by market capitalisation from PwC, the industry trimmed spending and largely managed expectations through higher production and unexpected help from currency devaluations and lower input costs, despite continued headwinds from weak commodity prices.

PwC’s Africa Mining Centre of Excellence head Michal Kotze says: “The success of cost-saving initiatives became more apparent in 2014 as operating costs decreased 5%. While the mining industry had been indicating for the last two years their intention to reduce capital spending, such reductions were actually realised in 2014 as expenditures on significant projects declined 20%.

“A key measure of the industry’s investment agenda, capital velocity, slowed to just over 12% with further decreases expected in 2015 and for the first time, the total asset base shrunk 1%.”

While commodity prices decreased across a number of commodities including iron ore, coal, and copper and drove lower revenues, the report found this was partially offset by increased volumes, particularly in iron ore where supply expanded on the back of large expansion programmes of the past few years.

“The decline in the iron ore price is having a significant impact on the top 40 miners. While slower demand from China is making headlines, the price declines are more related to the current oversupply in the market.

The report also found that while gold prices were volatile, they remained relatively steady compared to prior years. Nickel, however, was one of the few commodities to see a boost in 2014, gaining about 15% due mainly to supply issues.

“With few exceptions, market supply and demand trends result in miners operating on the assumption that lower commodity prices will continue and the focus will therefore remain on containing operating costs and maintaining capital discipline,” adds Kotze.

The report also found, for the second year, the majority of the largest mining companies came from emerging markets Brazil, Central and Eastern Europe, China, India, and Saudi Arabia, rather than OECD markets, with another two top entrants from China and a lower overall decline of only 7% – compared to an OECD drop of 21% – in market capitalisation.

This decrease was despite a lower adjusted profit contribution from companies in the emerging markets.

PwC Assurance Partner Andries Rossouw says: “Mining companies from emerging markets tend to focus on mining in their own jurisdictions whereas those in the OECD tend to have more diverse global portfolios. This divide, coupled with the wealth of new development potential in emerging markets and differing shareholder expectations, continues to create divergence.”

“How the industry will grow in the years ahead will be impacted by a number of factors, including the ability of tier 1 assets to produce substantial quantities at costs significantly below average; the demand for commodities from China and other emerging markets; the impact of changing tax, environmental and beneficiation regimes; and the willingness by the industry to enter into greenfield projects, instead of only developing smaller brownfield projects,” Rossouw concludes.

Key findings of PwC’s Mine report: