Underground mining contractor, Murray & Roberts Cementation, reports good progress on this contract and is due to complete the last of the three shafts at the end of the year.

The TORP will allow Anglo Platinum to safely exploit the UG2 reserve in the Townlands decline shaft and make optimal use of the overall ore tonnage capacity at Townlands. It also enables a major extension of mine life. The project has, however, created a demand for additional ventilation in the lower decline area which will be met by a new dedicated downcast shaft system carrying 600 kg/s of air with 8.0 MW of surface bulk cooling.

The three ventilation shafts, which will intersect the decline system on 26 Level some 821 metres below surface, are sited some 3.0 km from the main Townlands vertical shaft. This is adjacent to the Paadekraal 2 Shaft development area.

Prior to work beginning, a comparative study was undertaken to determine the most cost effective and appropriate means of sinking the shafts. It was decided that although the blind sink option had a competitive risk rating, the time that it would take to be fully operational would negatively affect the future production areas of Townlands shaft. Muller says that the raisebore option also offered significant advantages in terms of safety, health and environmental risk.

The three ventilation shafts have been placed some 28 metres apart and connect directly with the underground tunnel on Level 26, some 821 metres below surface.

Ground conditions were not optimal and, to ensure that the skin to skin pillars between the shafts remain regular and to minimise any deflection, the pilot holes were drilled using Murray & Roberts Cementation’s Rotary Vertical Drilling System (RVDS).

The Rotary Vertical Drilling System is an automatic steering system for drilling vertical holes. The 15” RVDS was developed jointly between Murray & Roberts Cementation and Micon (Germany).

The RVDS is a closed loop system where two axes are measured continuously using electronic sensors. “Basically, when a deviation from vertical is detected hydraulic cylinders are activated to exert a radial force against the sidewall to correct the deviation,” Muller explains.

“This system is particularly suited to directional drilling in conjunction with raiseboring. It uses a pair of incline sensors to measure the borehole inclination and transmits the data to an electronic unit. If the pre-programmed directional limits are exceeded, the steering function is initiated by the hydraulic steering system, which extends or retracts the four external, independently operated control ribs,” Muller adds.

The extendable stabiliser ribs generate radial forces and work against the angle build-up. The RVDS is a complete system comprising the down hole tool and an independent PC-based surface system. The down hole tool, in turn, comprises two parts, the pulser sub and the steering sub, each about 1.5 metres in length.

To monitor the self-steering drilling process, pressure waves are sent to surface continuously through the flushing water and converted by a pressure transducer on surface. This data is decoded and report to a computer in the operator’s cabin where both the condition and steering of the tool is continuously monitored.

The non-rotating lower part contains the sensors, the data processing electronics and steering unit. This sub is fitted with radically extendable ribs. The required steering force is generated hydraulically by an oil pump inside the pulser sub and is transmitted to the borehole wall by pistons and steerable ribs. The directional data signals are also transmitted to the mud pulser for further communication to the surface computer.

Both the water pulser for data transmission and alternator for the electrical power supply as well as the pump for hydraulic power supply are housed within the pulser sub. A water turbine drives the alternator and pump. A fully digital electronic unit located in the steering sub supplies the two accelerometers with the required voltage. Inclination data is then compared to predetermined data and, if necessary, transformed into steering signals.

Subsequently, one or two of the four control valves are being supplied with current. The valves control the cylinder oil pressure which, in turn, generates the compensating forces necessary to achieve vertical drilling. The directional data signals are also transformed into a pulse pattern by the digital electronics and they are transmitted to the surface. 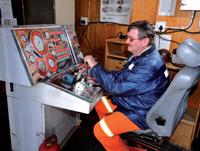 A Wirth HG330 raisebore machine was mobilised to site. This is one of only five such machines in operation worldwide, and four of these are owned and operated by Murray & Roberts Cementation.

Muller says that Murray & Roberts Cementation continues through this level of accuracy to hold world records for the smallest deviations on raisebored pilot hole drilling contracts. “Standard deviations are generally in the order of 0.15% over a length such as this,” he says.

Cement was injected into these holes at a pre-calculated pressure. The head pressure on the cementated holes ensured that the water was pushed away from the raisebore holes and formed a cement curtain on the circumferences of each shaft. Some 205 tonnes of cement was used to provide this protection.