Tsavorite to be mined and marketed

Tanzanite One, the largest and most advanced miner of the rare blue tanzanite gemstone, is poised to launch a new coloured gemstone initiative through the first large-scale production of a vivid green stone named tsavorite. Tanzanite One executive director Bernard Olivier tells Mining Review Africa that the acquisition of the tsavorite project marked the first concrete move in the AIM-listed company’s strategy to grow its market share and competence as a focused and diversified premium coloured-gemstonemining company.

“Our aim is to become the most profitable and consistent miner of premium coloured gemstones in the world,” he says, “and the launch of our tsavorite initiative will provide the first opportunity to expand the company’s business model into other premium coloured gems.”

Before the acquisition exercise, Tanzanite One was seen as a vertically integrated tanzanite company, meaning that it explored, mined, beneficiated, branded and marketed the mineral tanzanite. “We have progressed our mining and exploration competencies to the extent that we are becoming a more widely focused coloured gemstone mining company,” Olivier explains.

The Tanzanite One mine is situated in the Merelani tanzanite mining area in the Simanjiro district of Northern Tanzania, 70 km south-east of Arusha, the only known source of tanzanite, which is one of the world’s rarest gems. The Tsavorite project is located about 20 km to the south-west of Tanzanite One’s existing tanzanite operations.

“Tsavorite already enjoys significant interest and respect within the formal gemstone market, with the gem being well recognised in the industry as a premium product. The hurdle is to get it into the public domain” Olivier says.

“Our initial research shows that many gem dealers believe that if we can provide a consistent supply from our mining operation, the price of tsavorite will be stimulated, rather than come down because there’s more available. This is because they will then be able to handle marketing, which they do not do now because they want to avoid developing a market that they cannot supply,” he explains.

The brilliant green gemstone has a high refractive index, durability and clarity, a hardness approaching 7.5 on the Mohs scale, is suitable for almost any jewellery application, and is durable enough for everyday wear. Opencast mining results in much lower production costs, yet its price per carat varies between two and four times that of tanzanite.

The property comprises 12 prospecting licences covering an area of 100 km2. Once all the licences had been transferred by late last year and the company was in a position to move ahead with the full bulk sampling operation, the decision had been taken to put all capital projects on hold until the economic downturn shows signs of recovery. “We have not carried on with bulk sampling in the past six months,” Olivier confirms.

“At that stage we had already established an independent resource estimation of about 18.24 to 24.96 million tonnes of potentially open pit mineable tsavorite-bearing gravels,” he says. “We intend further defining the resource and developing a mine plan which will take into account prioritisation of high value extraction,” he adds.

“The good news is that about a month ago we conducted a private placement of R45.7 million and about R8 million of those funds are being invested in the resumption of bulk sampling and a scoping study for the tsavorite project. The funds have just become available, and we are making an immediate start.” 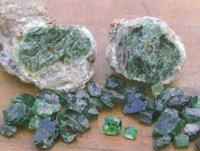 Processing of the bulk samples is being handled by our mobile plant, and at Tanzanite One’s Merelani processing plant, which has spare capacity available. “Once the bulk sampling and resultant scoping study are completed, we will move into a proper feasibility study,” Olivier says.

The timeline for the bulk sampling and the scoping study is around 12 months; the pre-feasibility will start by roughly mid-2010. “At that stage we get to a decision point. Do we need to calculate the exact costs that would be involved and do a specific raising for the project, or do we fund it out of our Tanzanite One operation, which has been profitable till last year? In the case of the latter we do not need to go into a full feasibility study,” Olivier points out.

“One thing is clear. It will be a lot easier to move this project into production, being in close proximity to our current Tanzanite One operation. We can handle a lot of the work with our current infrastructure; the mine site is nearby; the geology is very similar; and a lot of our equipment can be applied for use on this project.

Underground in Tanzanite One’s
Merelani mine in Tanzania.

“To summarise,” Olivier says, “we could be in a position make the decision to mine by the second half of 2011 and could be mining by early 2012.

“The cost of setting up the whole operation and reaching full production will be less that it was with Tanzanite. Our current budget estimation is that it will cost about US$8 million to reach full production, but this is a very early stage estimate which could certainly change in terms of bulk sampling, scoping study and pre-feasibility study results.”

Life of mine throughput for the project will be around 20 million tonnes. “This will mean processing of more than a million tonnes a year over a life of mine of some 15 years,” Olivier says. “The current bulk sampling will provide us with accurate grades, and only then we will be able calculate annual production.

The tsavorite operation is really a perfect fit, being where Tanzanite was 10 or more years ago, with very few people knowing about it. Now we have the opportunity to put our green gemstone into the limelight by doing the marketing, but also get the mining side right. 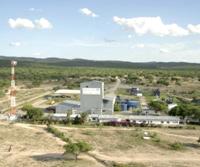 Aerial view of the Tanzanite
One mine site.

“When the timing is right, and when the world is in a better financial position, we will certainly be looking at other coloured gemstones,” Olivier reveals.

He says it is estimated that the coloured gemstone industry is about the same size as the diamond industry, yet there are very few coloured gemstone miners. “There’s a lot of room for a strong, highly sophisticated, scientific mining company to come through and amalgamate some of the small-scale mining that is happening in most gemstone sectors.

“East Africa is ideal for gemstone expansion. The Mozambique mobile belt that runs from Tanzania through Malawi and Mozambique and even down into South Africa is very prospective for coloured gemstones,” he explains. “And of course it is an area with which we are very familiar, so it is definitely our primary target.