“Our exploration geologists have identified an area known as Golden Ridge where we believe there is a potential mine,” says Barrick executive general manager: operations for Tanzania, Gareth Taylor. “It is situated about 30 km south-west of our Bulyanhulu mine.”

“The new mine would be similar in size to our Tulawaka mine, which will be producing over 200 000 ounces of gold this year, but is closing in 2009,” he explains. “In my view the logical way to handle that mine would be simply to lift Tulawaka when it’s finished, and to move the capital infrastructure across to Golden Reef,” Taylor suggests. “This would certainly help us to keep the capital cost of the mine down, but if the price kicks like everybody is saying, then we might accelerate,” he adds.

Either way, the project for Barrick’s fifth gold mine in Tanzania is two to three years away. “We have to do the feasibility, and if we fast-track it we could probably have the BFS ready by the middle of next year,” Taylor estimates. “Permitting should be completed towards the end of 2008, and construction could then commence, leading to commissioning at the end of 2009 or early 2010,” he concludes. 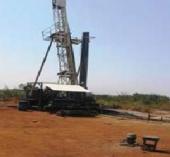 “We could assume that it will be a stand-alone new project,” Taylor suggests. “On the other hand, we could time it so as to take over the Tulawaka infrastructure and equipment when it closes down, but that date will depend on how successful we are in extending the minelife of Tulawaka. Either way, the new mine would not be producing before 2010,” he confirms.

“Cost would be entirely dependant on which option we adopt,” Taylor points out. “As a rough comparison, the capital cost of Buzwagi was originally calculated at US$374 million (more than R2.6 billion), and at the rate prices have been escalating it would cost in the region of US$450 million (more than R3.2 billion) today,” he estimates. “So it’s difficult to say what the Golden Ridge cost would be,” Taylor points out, “but with rising costs, plus the fact that there’s a three-year wait for a mill, I would really prefer the option of uplifting Tulawaka when it closes,” he insists.

“The priority now is to complete the BFS and make a final decision based on its findings,” he contends.

BUZWAGI START-UP THIS YEAR
Work on the US$400 million (almost R3 billion) Buzwagi gold project in north-west Tanzania will commence in Q3 of 2007.

Project general manager Dave Anthony confirms that the re-location of the 200 families involved is ahead of target. “We are on track to complete re-location by the end of July and should start construction on target in August and be ready to commission in Q3 of 2009,” he says.

“The 100 per cent Barrick-owned Buzwagi project will produce 250 000 ounces of gold annually at total cash costs of US$280 per ounce over a currently estimated 10-year mine life,” Anthony reveals. “First production will be in 2009, and it is estimated that it will reach about 150 000 ounces for the year,” he adds. “It will ramp up to full production by the end of 2009, and from 2010 the Buzwagi process plant will treat 4.4Mtpa of ore and produce a total of 250 000 oz pa of gold. It will also produce 9Mlbs pa of copper.”

Anthony confirms that Buzwagi has 2.64 million ounces of gold reserves and a further 41Moz of resources. Located 80 km south of Barrick’s Bulyanhulu mine, Buzwagi is expected to benefit from synergies gained from shared infrastructure and the recent project development experience in building the Tulawaka mine.

A view of Tulawaka looking
from the East to the West

BULYANHULU CIL PLANT IN OPERATION
The Bulyanhulu mine has completed and commissioned its US$27 million (R200 million) carbon in leach (CIL) plant. “As a direct result it will be processing an additional 2 000 ounces of gold per month,” says acting mine general manager Don Strickland.

“With increased future production always in mind, Bulyanhulu has also been conducting an aggressive exploration campaign on Reef 2 and Reef 0,” he reveals. “Originally the exploration programme targeted completion of 29 600m of drilling in 2006 with the intention of adding 267 000 ozs of gold to the existing reserve. However, improved productivities led to 40 000m being drilled, and over 430 000 oz were identified,” adds Strickland. Drilling is continuing on Reef 2, and is extending the deposit in both strike and dip directions.

Prospects for modest expansion are good. “A number of near surface targets have been, and are continuing to be, explored and evaluated for the potential to open small open pits to take further advantage of the new CIL circuit in the processing plant,” he explains. “Nothing definitive has yet been determined at this stage.”

Situated in north-west Tanzania about 55 km south of Lake Victoria and approximately 150 km from the city of Mwanza, Bulyanhulu’s focus will now be switching from expansion to improvement of quality. “Production this year is expected to reach 345 000 ounces — an increase of only 5% on the 329 800 ounces produced in 2006,” Strickland calculates. “Current life of mine forecasts indicate an average production of more than 360 000 ounces over the next few years.”

MORE GOLD AT NORTH MARA
At Barrick’s North Mara mine gold production has increased following completion of the Gokona expansion project. “Work has started on development of the Nyabigena pit infrastructure, which is scheduled to come on line in Q4 of 2007 at a cost of almost US$1 million (R7 million),” mine general manager Bill MacNevin reveals. “The pit has reserves of 6.01Mt, and operating life is expected to last until the end of 2009,” he adds. “Looking ahead, exploration around the Gokona and Komarera resources continues to produce encouraging results, and an expansive regional programme is continuing,” MacNevin explains. At the same time, mining fleet capacity is being increased. “A new fleet of mining shovels, trucks and associated ancillary equipment is being transported to the site, and is scheduled for commissioning in September 2007,” he states.

Carbon in leach plant at
Bulyanhulu

TULAWAKA HEADS UNDERGROUND
At Tulawaka mine a new underground project will add 100 000oz to production, but will not affect life of mine, which is scheduled to end in Q3 of 2009. Tulawaka is a 70/30 joint venture between Pangea Goldfields Inc., a wholly-owned subsidiary of Barrick, and MDN Northern Mining/Minieres du Nord.

The new project — which involves the development of decline at the base of the Tulawaka West pit — is advancing on target. “First ‘cut’ of the decline portal is expected to take place in mid-July 2007, with ore production starting in August,” mine general manager Greg Walker explains. Capital cost of the project is US$15 million (R110 million), and it is expected to continue mining through to mid- 2009.

“We have an intensive drill programme this year aimed at increasing reserves and extending life of mine,” he points out. “We will spend US$3.5million (R25 million) on near mine exploration which will follow up on a number of targets previously highlighted,” Walker concludes. “A review of reserves/resources is due in Q4 of 2007, and the results will be released in Q1 of 2008.”