View of the highly durable
exterior of the new Toughbook
CF31.

The latest model of a laptop computer series designed to withstand the rigours of operating in the difficult underground and surface conditions experienced in the mining industry, is to be launched in South Africa in August.

Known as the CF 31 the new laptop is the latest in the Toughbook fully rugged series of laptop computers designed and manufactured by Panasonic Corporation in Japan, and imported and distributed in South Africa by Pansolutions Holdings Limited. The fully rugged mobile computers are available in laptop, tablet and convertible tablet format, as well as the Ultra Mobile Personal Computer (UMPC).

Company spokesman Rohan van Heerden says, “Described as one of the world’s most durable laptop computers, it is specifically designed for use in extreme environments.”

“It is vibration-, shock-, water-, dust-, and heat-resistant, which means that data is secure, regardless of the conditions in which one is working. In mining applications, it is equally at home, whether it is being operated by a supervisor in the most unpleasant and difficult underground conditions, or a geologist on surface out in the field in extreme heat, bright sunshine or heavy rain.” 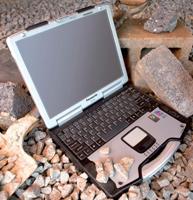 The CF31 open and ready
to go in any environment.

The unique aspect of the CF31 is that it is the only fully rugged laptop in South Africa, according to van Heerden. “What this means is that it has a mere 2.2% failure rate, whereas the standard laptop’s failure rate is between 25 and 30%,” he continues.

“The Toughbook series costs two to three times as much as a normal laptop, but the normal laptop’s failure rate is more than ten times that of the Toughbook,” he claims.

“Crafted from lightweight materials, it boasts a longer battery life than regular laptops, and features advanced wireless technology. And the Toughbook does not compromise on technology or design. It makes use of the latest computer technology available, and houses it all in a stylish and ultra-durable package,” van Heerden says.

Various other features add to the effectiveness of these laptops: they have improved ruggedness in the form of the international IP65 rating for water and dust resistance; they have a shockresistant body ensured by a 90 cm free fall test; they have a highbrightness TFT with anti-reflection coating, which enables viewing under direct sunlight; they offer improved battery life of up to 12 hours with a secondary battery; and they have an Intel Core i5 processor with four cores, a 250 gigabyte hard drive and up to eight gigabytes of RAM. 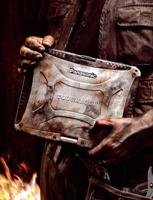 The battered CF31 survived
a major fire – it looks terrible,
but it is still in working order.

The Toughbook series is proving increasingly popular in South Africa, and Pansolutions expects the market for the CF31to reach 700 in the current financial year ending on 30 September 2010, rising to 1,000 in the 2010/2011 financial year, van Heerden estimates.

“The company is more project-orientated, and works with the major companies like Gold Fields, Kumba Iron Ore, Exxaro, AngloGold, Anglo Platinum and Anglo Coal on projects which could involve more than 100 units,” he explains.

There is also growing interest in the Toughbook from elsewhere in Africa. “Pansolutions is already dealing with mining companies in Zambia, Botswana, Namibia and Mozambique, and is planning to move into Ghana and Tanzania,” van Heerden concludes.