Uptick on the copperbelt

With the copper price nearer to US$3/lb than US$2/lb, projects in the Zambian/DRC Copperbelt region are showing signs of life again. Henry Jonker, TWP’s general manager of its regional offices, says this is reflected in more enquiries starting to come from the Copperbelt. 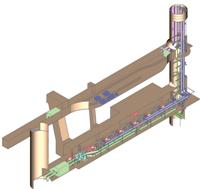 Three dimensional graphic of the
planned Frontier mine
dewatering shaft

TWP has long planned to open an office in Zambia to serve the Copperbelt, but the Zambian windfall tax, together with the global economic slowdown discouraged and delayed that move until recently. “However, we have now bitten the bullet and decided to relocate a very experienced mining engineer, Peter Haken, to Zambia. Peter has extensive experience working in the Copperbelt, and will be setting up an office in Chingola. The plan is for him to be established there by the end of 2009.”

TWP already has regional offices in Polokwane and Rustenburg to position it closer to major clients. The plan is the same in Zambia where Jonker, who originally would have manned the Zambian office himself before everything changed, hopes to see a regional office with some 30 qualified personnel in two years. Most of those will be locals.

Meanwhile, the revival of activity on the Copperbelt is reflected in projects such as one recently awarded to TWP, a technical review of a portion of the Konkola North feasibility study for Teal Exploration and Mining.

Jonker says, “We have also received expressions of interest from KCM for three projects, and one from Mopani Copper Mines Zambia. This is a reflection of greater buoyancy in the sector. People are saying to each other that if they cannot mine profitably now, they should not be in the business of mining at all.”

On projects where TWP has already been active, its role in the Konkola 4 shaft design project has grown in scope.

In addition, TWP has recently completed the design for Dewatering Shaft for First Quantum’s Frontier mine, which should commence later this year.

Jonker notes that the current tight environment has resulted in mining companies looking at projects using in-house skills. “EPCM contractors continuously have to prove their value addition to clients.” Hence, in part, the importance of being in close proximity to the clients.

Jonker also believes that Zimbabwe’s mining sector will provide a lot of activity in the near future, as South African companies, which have lagged in other places in Africa and which will tend to use South African contractors, look for new opportunities.

TWP also has a presence in Mozambique, thanks largely to TPS P Architects, a wholly owned subsidiary of TWP Holdings, which has an office in Maputo.

The office in Zambia is part of TWP strategic growth plan. “We plan to walk there before we run, though clearly there is a much better mood in the mining industry now than some months ago,” Jonker says.